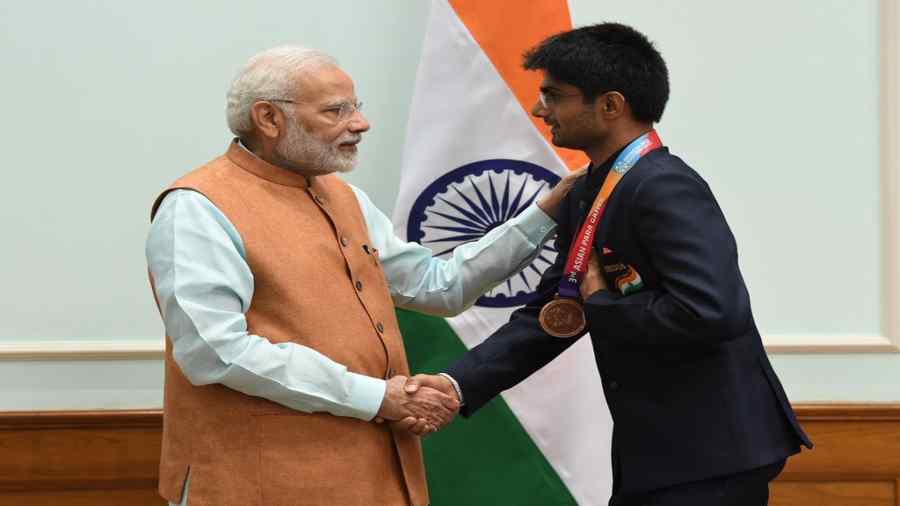 Congratulating Suhas Yathiraj, an IAS officer who won a silver medal at the Paralympics, Prime Minister Narendra Modi on Sunday described him as a fantastic confluence of service and sports who has captured the imagination of the entire nation. Modi also spoke to Yathiraj and said the nation is proud of his achievements.

Thanking Modi, the officer recalled the interaction they had after the Asian Games where the prime minister had motivated the athletes.

Official sources said the IAS officer also recalled Modi's message before they left for Tokyo where he asked players to focus on their game instead of results.

Yarhiraj said such an advise was really helpful and also thanked Modi for constant support to the athletes.

A fantastic confluence of service and sports! @dmgbnagar Suhas Yathiraj has captured the imagination of our entire nation thanks to his exceptional sporting performance. Congratulations to him on winning the Silver medal in Badminton. Best wishes to him for his future endeavours. pic.twitter.com/bFM9707VhZ

The 38-year-old Noida district magistrate ended his campaign with a historic silver after going down fighting against top seed Lucas Mazur of France in the men's singles SL4 class final at the Tokyo Paralympics here on Sunday.

The shuttler, who has an impairment in one of his ankles, produced an entertaining performance before narrowly going down 21-15 17-21 15-21 to two-time world champion Mazur in a 62-minute summit clash.

Yathiraj said he has never felt so happy and disappointed at the same time in his life.

"Very emotional (moment). I have never been so happy and so disappointed in my life at the same time. Most happy because of the silver medal but most disappointed because I missed the gold medal by a whisker," he said after winning the match in a video message posted by the Paralympic Committee of India.

"But destiny gives what I deserve and probably I deserve silver medal so I am happy for that at least."

Suhas, who has an impairment in one of his ankles, said he hoped for the national anthem to play at the Yoyogi national stadium but it was not to be as the gold medal slipped through his fingers.

"As I said, I have never been so disappointed and most happy in my life, coming so close and yet so far but still winning a Paralympic medal is not a small feat and I am extremely proud for what I have done in last few days."

A computer engineer, Suhas became an IAS officer in 2007 and was at the forefront of the fight against the COVID-19 pandemic as Noida's DM.

On Sunday, Suhas became the first ever IAS officer to win a medal at the Paralympics.

"For every sportsperson, there is no higher achievement then Olympic or Paralympic, so this means the world to me," he said.

Born in Hassan, Karnataka, Suhas had to travel a lot since his father was a government servant and had postings at difference places.

Suhas has won five golds, four silver and seven bronze medals in international competitions in his career so far.

He also won gold in 2016 Asia championships, besides a bronze at 2018 Asian Para Games.

At the end of his campaign here, he also received a phone call from prime minister Narendra Modi, who lauded him being a multi-faceted person. He thanked the PM for his encouragement.