The Jordi Alba-led side hold their composure to go through on penalties, an Insigne beauty sends Lukaku and Co. packing 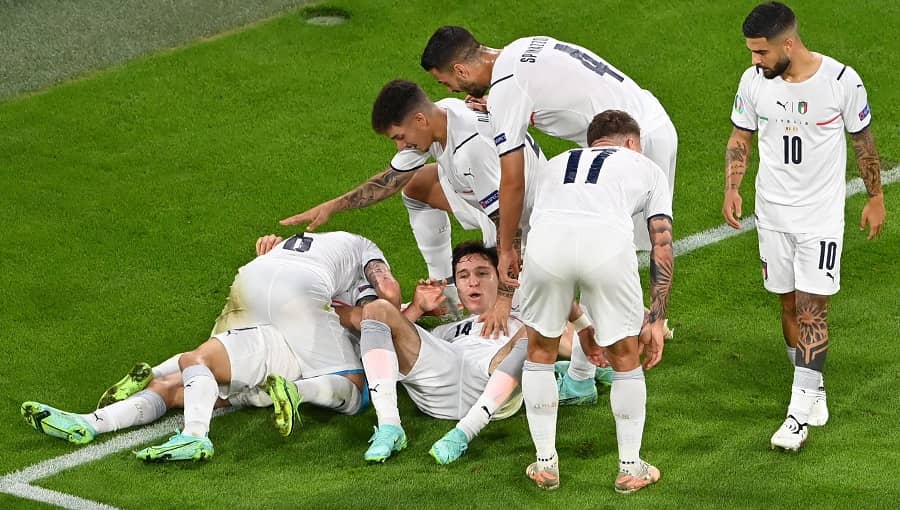 Spain equalled their highest ever EURO goals tally to bring Switzerland's remarkable EURO 2020 run to a close, winning on penalties to book their first spot in a major tournament semi-finals since 2012 while Lorenzo Insigne's splendid finish from the edge of the box made the difference as Italy edged out Belgium to win an enthralling UEFA EURO 2020 quarter-final and set up a semi-final blockbuster against Spain.

A coordinated and compact Switzerland sat deep from the start, allowing Spain to keep possession. However, it took just eight minutes for La Roja to break the Swiss resolve. Koke's outswinging corner fell kindly for Jordi Alba, whose rifled effort was diverted by Denis Zakaria's outstretched leg past Yann Sommer.

A goal down, the Nati began to turn up the pressure and, in a positive spell towards the end of the first half, Silvan Widmer battled to win a corner from Haris Seferović's redirected effort. The Swiss certainly posed a threat from set pieces, but this time Manuel Akanji glanced off target.

Vladimir Petković's side pressed high in the second half, looking to establish a foothold and it paid off. As Pau Torres and Aymeric Laporte struggled with a seemingly straightforward clearance, Remo Freuler pounced to feed Xherdan Shaqiri, who duly steered home to restore parity on 68 minutes.

Switzerland were back in the game, but in the 77th minute Freuler saw red for a dangerous challenge and the Nati were reduced to ten men.

Spain cranked up their intensity as the game moved into extra time. However, Gerard Moreno spurned several decent opportunities, before Sommer was alert to deny the Mikel Oyarzabal and Dani Olmo efforts that followed.

Victorious from the spot against France, this time Switzerland were outdone, despite Sergio Busquets firing against the post first up. Unai Simón saved from Fabian Schär and Manuel Akanji, and Ruben Vargas blasted over, allowing Oyarzabal to send Spain into the semi-finals.

Spain’s coach Luis Enrique said. "We are so proud. It'd be ridiculous to think that we, or any of the semi-finalists, would sign for just getting that far now – all of us want to get to the final and win."

In the other match, Leonardo Bonucci had an early finish ruled out for offside, but Belgium initially looked the sharper side, despite the absence of the injured Eden Hazard. Kevin De Bruyne and Romelu Lukaku both tested Gianluigi Donnarumma before Nicolò Barella made the breakthrough on 31 minutes, wriggling through two challenges to fire a shot past Thibaut Courtois.

Italy's movement overwhelmed Belgium at times, and they were set to take a 2-0 lead into the break when Lorenzo Insigne bent a glorious shot past Courtois from the edge of the box. However, Giovanni Di Lorenzo's foul on Jeremy Doku gave the Red Devils a chance from the penalty spot, and Lukaku took it, sending a firm, low finish, straight down the middle.

That De Bruyne-Lukaku axis carried much of Belgium's threat, the big striker denied by some heroic defending from the hare-footed Leonardo Spinazzola on the hour. Even so, Italy's mighty energy levels meant they offered a threat from all over the park, pouring men forward in search of a killer third and buzzing around Belgium every time they threatened.

Chances kept coming in the second half, the best of them for Belgium. Thorgan Hazard could not quite turn a close-range tap-in on target, and Doku had a swashbuckling effort from distance, but the Red Devils were continually put off their final touch as Roberto Mancini's side harried them. Their final throw of the dice was to send goalkeeper Thibaut Courtois up for a last-gasp corner – to no avail.

Italy coach Roberto Mancini sounded happy after the game. "I don't think we suffered too much at any moment of the game. To beat a team like Belgium, you need a great performance from everybody and that is exactly what happened today."

Belgium midfielder Kevin De Bruyne said, "I think we tried everything to win this match. They scored a fantastic goal, but the first one may have been a mistake on our part. They had more possession and the ball didn't go in for us, which is a shame. Getting eliminated is always a disappointment."

The Azzurri face Spain next in a mouth-watering semi-final clash.

Compiled with reports from PTI,  New York Times and the EURO 2020 app.