'It's not a clash, we are coming together, trying to bring our films to the people. I hope both the films have a good run', says khiladi 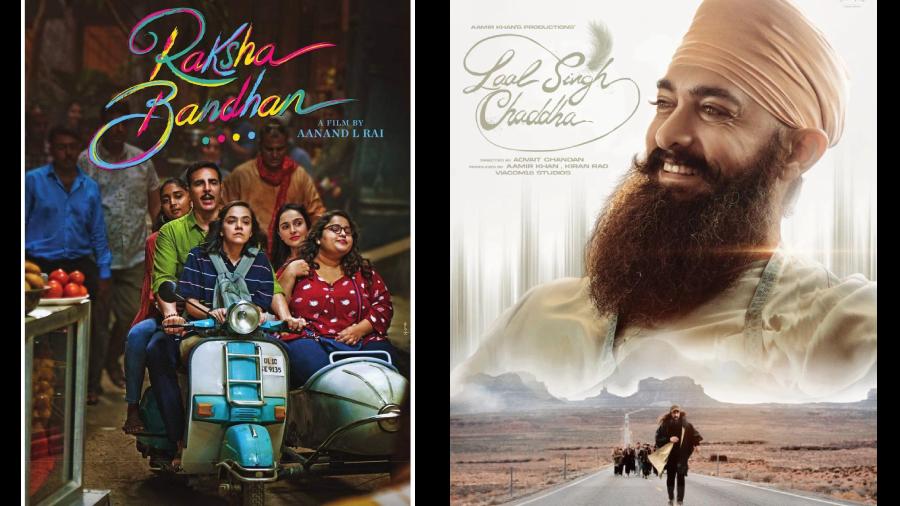 Commenting on the box office face-off of his film Raksha Bandhan with Aamir Khan's Laal Singh Chadha, Akshay Kumar on Tuesday said it was "not a clash", but two good movies coming together.

Both Raksha Bandhan and Laal Singh Chadha, also starring Kareena Kapoor Khan, are set to be released theatrically on August 11.

Kumar said two films releasing in the same week is "natural" as there are many movies ready to hit the screens due to delays caused by the COVID-19 pandemic.

"It's a big day. The film is releasing around the holidays, (the festival of) Raksha Bandhan will be around. Due to COVID-19, there are a lot of films that are waiting to be released.

"Since there are so many films, it's only natural that two films are releasing in one week. It's not a clash, we are coming together, trying to bring our films to the people. I hope both the films have a good run," the actor told reporters.

Kumar was speaking at the trailer launch of Raksha Bandhan at the city's iconic single screen theatre Delite Cinema.

Directed by Aanand L Rai, the film follows Raju (Kumar), a sweetshop owner who is struggling to get his four younger sisters married.

Describing Raksha Bandhan as a film that offers a solution to dowry, Kumar said it is a conscious effort on his part to tell stories that not only address a problem but also present a way out of it.

"Like, I did Toilet: Ek Prem Katha, Padman. Similarly, in this film we are not only talking about dowry but also offering a solution to the country and the world," he said.

"With every film I want to deconstruct myself. I want to break my image and then do something else. My criteria has always been to challenge myself. When I joined the industry, I used to only do action. It took me a long time to break out of it (image)," he added.

Also starring Bhumi Pednekar as the female lead opposite Kumar, the film was extensively shot in Chandni Chowk, New Delhi.

Pednekar, who reunites with Kumar post Toilet..., said Raksha Bandhan is an ode to the "pure" bond shared by siblings.

"My sister and I can't imagine our lives without each other. We fight a lot over things like food, clothes or TV remote, but also love each other a lot," she added.

Kumar, who spent his childhood growing up in Chandni Chowk, said shooting the film in Delhi was like "homecoming" for him.

"Even today, I sometimes quietly at night visit our old house in Chandni Chowk to meet my mamaji. I remember eating paranthas from Paranthe Wali Gali and fruit cream from Giani's."

The actor, who along with the film's team launched the trailer at Delite Cinema, said he has many fond memories of the theatre.

"I have watched so many films here. I remember watching Amar Akbar Anthony here in black," he recalled.

Asked to comment on Agnipath, the new military recruitment scheme announced by the Central government, Kumar said it was not an appropriate platform to discuss the subject.

Rai said the movie has an important place in his filmography, which includes hits like Raanjhanaa and the Tanu Weds Manu series.

"We had so much fun on this film that we didn't know when we finished working on it. Akshay sir treated me as his elder brother, even though he is elder to me," he quipped.

The filmmaker said screenwriter couple Himanshu Sharma and Kanika Dhillon wrote the script with Kumar in their mind.

Dhillon said they penned the film with a lot of heart and honesty, to which Sharma added that the movie allowed him to connect with his childhood.

Khateeb, Kaur, Khanna and Srikanth said they were happy to be part of Raksha Bandhan and working on the film was a fun experience.

Himesh Reshammiya has composed the film's soundtrack which boasts of songs by Irshad Kamil.

Raksha Bandhan is a Colour Yellow Productions in association with Cape Of Good Films.

Aamir Khan on the streets of Calcutta