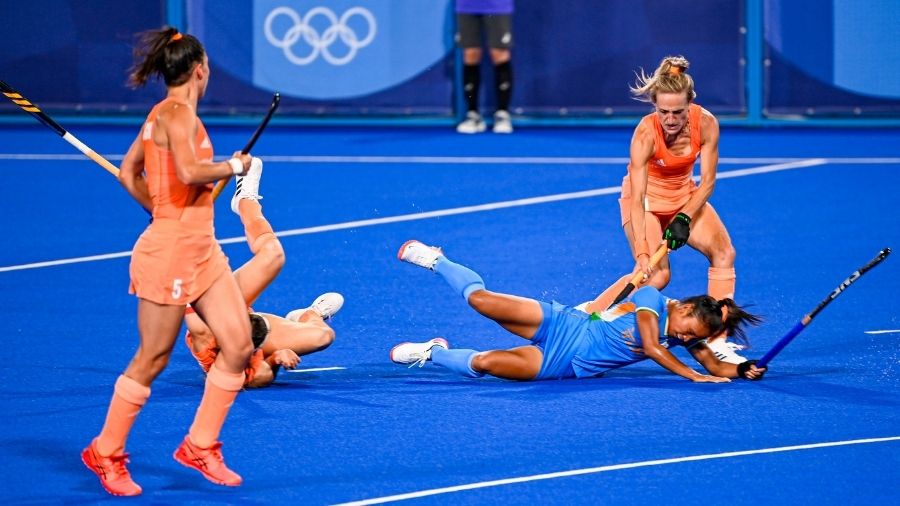 The Indian women's hockey team fought valiantly in the first two quarters before losing steam to go down 1-5 against world No. 1 Netherlands in their opening pool match at the Tokyo Olympics here on Saturday.

India's lone goal was scored by skipper Rani Rampal in the 10th minute.

It was a closely contested affair till the first two quarters with the brave Indian defence, led by goalkeeper Savita Punia, showing tenacity to thwart Netherlands' persistent raids.

The Indians too showed spark in between and mostly relied on counterattacks to surprise their opponents.

As expected, the Netherlands took the lead in the sixth minute through Albers, tapping in from close range a diagonal ball before the advantage was evened out by Rani Rampal in the 10th minute with a hit from the top of the circle.

Thereafter, it was all Netherlands who continuously attacked in numbers and in the process secured four penalty corners.

But the Indians defended stoutly, not afraid of putting their bodies in the line of fire. Savita was brilliant under the goal as he made some decisive saves to frustrate the Netherlands.

The Indians defended bravely in the first two quarters to go into the halftime locked at 1-1 but the break seemed to have broken their momentum as the Dutch came out all guns blazing after the change of ends and pumped in three goals to nip any chance of an upset in the bud.

The Dutch women started on a bright note after the change of ends and earned a penalty corner three minutes into the third quarter which was deflected into the goal by van Geffen to restore Netherlands' lead.

The Netherlands then scored two goals in quick succession through Albers (43rd) and Frederique Matla (45th) to take control of the proceedings and virtually shut the doors of a comeback for India.

If that was not enough, there was more agony in store for the Indians as Caia Jacqueline van Maasakker slammed home from their sixth penalty corner in the 52nd minute.

The difference in the level of both the teams' can be gauged from the fact that the Netherlands secured as many as six penalty corners as against India's none.

India will play Germany in their next Pool A match on July 26.

For the Indian women, it's their second successive Olympics, having featured in the Rio Games for the first time in 36 years.