Who runs the world? Ants. 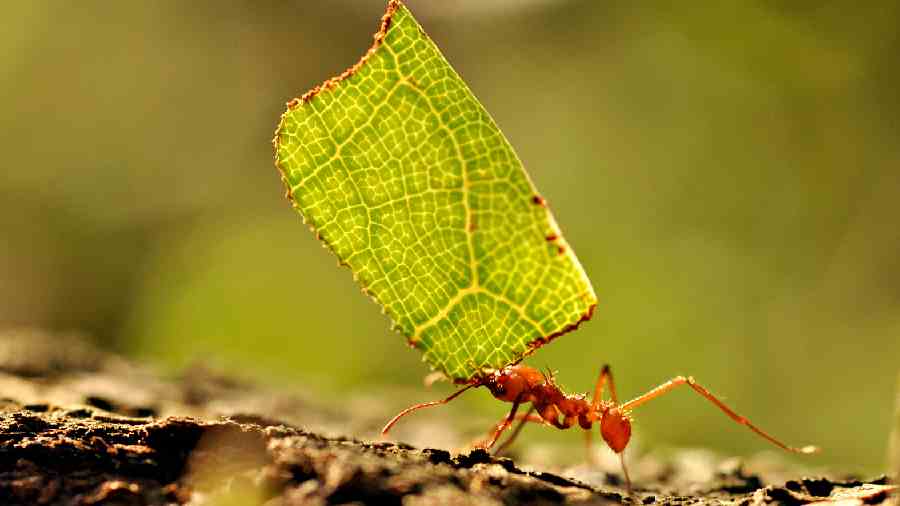 Over tens of millions of years of evolution, ants have figured out how to become astonishingly numerous without depleting the world around them
Farhad Manjoo   |   Published 04.12.22, 03:59 AM

In September, scientists at the University of Hong Kong published the most complete census of ants ever assembled. The numbers are so big as to seem made up. The study estimated that there are at least 20 quadrillion — that is, 20,000,000,000,000,000 — ants on earth. That’s about 2.5 million ants for every human. And because the study relied on a conservative estimate for ants that live in trees and did not include subterranean ants, the census is almost certainly an undercount. “I wouldn’t be surprised if it actually turns out to be an order of magnitude higher,” Sabine Nooten, an author of the study, told The New York Times.

The numbers floored me. Like perhaps every kid, I went through a period of intense childhood obsession with ants, spending endless summer afternoons in the backyard observing the mystery and the majesty of ant life — how unbelievably many there were, how elegantly they organised themselves, how terrifically busy they all seemed.

What has always beguiled me about ants is how their similarities to humanity — they live in societies, they’ve all got jobs, and they endure arduous daily commutes to work — are offset by incomprehensible alienness. So much of ant life makes no sense to us: there’s the abject selflessness, the subsuming of the individual to the collective. There’s the absence of any leadership or coordination, their lives dictated by instinct and algorithm, out of which emerges collective intelligence. There’s the way they navigate and communicate through chemical signals, creating road signs from pheromones, and never getting stuck in traffic jams.

But the quadrillion ant census got me thinking about ants in a way I hadn’t before — as a social species not just remarkably different from our own but one that is in many ways unquestionably superior.

Ants, I keep thinking, are an example for humanity to emulate. Over tens of millions of years of evolution, ants have figured out how to become astonishingly numerous without depleting the world around them. Indeed, just the opposite is true: because they provide so many important functions to their habitats, they are “the little things that run the world,” as the great sociobiologist and ant enthusiast, E.O. Wilson, once wrote about ants and other invertebrates.

It is natural, as a human, to slip into thinking of our species as somehow special. By many objective measures, though, ants are far more consequential to life on earth than we are. Wilson pointed out that if people were to disappear, little about the world would change for the worse; if ants and other invertebrates did, nearly everything would suffer. Ants aerate soil, transport seeds, and aid in decomposition; their mounds serve as dense nutrient oases that are a foundation for a wide range of life. Given their centrality to life on the planet, not to mention their teeming populations, shouldn’t we think more highly of ants? They are among the most sophisticated and successful life-forms ever to crawl the earth.

Humans are, of course, smarter and bigger than ants and in the past 300,000 years or so of our species’ reign, we have conquered the planet and commandeered its resources to a degree perhaps unmatched in the history of life. But compared with those of ants and other social insects — bees, termites and some wasps — our record is a hilarious blip.

Ants have been around for 140 million years. They are a dominant feature — often some of the primary ecosystem engineers — of nearly every land-based ecosystem on earth. And they are the true inventors of what we think of as several quintessentially human endeavours.

Ants have been farming for at least 60 million years. Leafcutter ants, for instance, forage for vegetation, which they use to grow crops of a fungus that they have domesticated for their exclusive use. Other ants maintain herds of aphids that feed on the sap of plants; the ants then ‘milk’ the aphids of their sugar-rich secretions. Ants are master architects as well, formidable warriors that can also maintain peace through strength, and even engage in compromise and a kind of democracy.

Ants aren’t always good neighbours. But even when they’re ecologically destructive, they have much to teach us about cooperation. Over the past century or so, the Argentine ant, an invasive species that hitched rides with humans to spread from South America to much of the rest of the world, has dominated the globe by forming a surprising, and perhaps evolutionarily novel, organisational structure: the supercolony. These are massive colonies of ants in which individuals mix freely among different nests spread across huge distances. The ants do so because in their adaptation to their new lands, they dramatically reduced their aggressiveness, allowing for much bigger collectives. One supercolony of Argentine ants spans nearly 4,000 miles from Italy to Spain. It is “the largest cooperative unit ever recorded,” to quote one study.

This sort of social flexibility is a key part of ants’ success. It’s hard to imagine that in a few million years, humans will still be among the planet’s dominant life-forms. Ants, though? Their antics are sure to endure.

In a paper published this year, the ecologists, Catherine Parr and Tom Bishop, suggested that even climate change, our species’ great stain on the planet, might not prove a great calamity to ants whose social structure will allow them to “ride out environmental changes to a much greater degree than solitary organisms”.

Which, really, is no surprise. Ants were here before us, and they are likely to long outlast us. They run the place. We’re just visiting.