Evidence of the intellectual bankruptcy of the ruling classes

Unless created on a human scale, statues of the great and the good look as if they are victims of hormonal imbalance 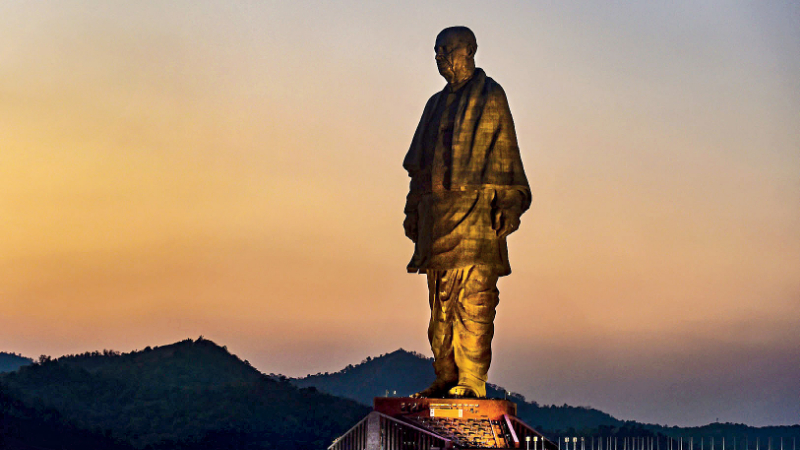 The Statue of Unity may be an indirect embodiment of the height of megalomania, but such grandiloquent gestures are typical of the men and women of straw who commission these and make decisions for us
PTI Photo
Soumitra Das   |   Published 17.12.18, 08:52 AM

We Indians never pass up a chance to cry ourselves hoarse singing the praises of our ancient civilization and past glories. It gives the impression that everything great happened to us in the past. We cleverly sidestep the present because we know there is little to recommend it and keep harping on the past. Yet, our protestations notwithstanding, can we still claim as our own the aesthetic and intellectual excellence that ancient India had achieved? It would not be an exaggeration to say that the splendours of Ajanta and Ellora, the sensuous beauty of the erotic sculptures of Khajuraho and Konark, the soaring tower of the Brihadeshwara temple of Thanjavur, the magnificence of Taj Mahal and Moti Masjid in Agra and Humayun’s tomb in Delhi, and the delicacy and vitality of the various schools of miniature paintings would do any nation proud.

So why does a nation that can boast of — of course it all happened in the distant past — amazing manifestations of human creativity feel compelled to commission, at a mind-boggling cost of almost Rs 3,000 crore, a Brobdingnagian blunder like the statue of Sardar Patel? Standing at 597 feet, the statue is, at this point of time, the tallest in the world.

India does have a tradition of creating giant statues, the 57-foot-high monolithic Gomateshwara figure carved out of a single rock of granite around 983 CE and installed on Vindhyagiri hill in Karnataka being one of the most majestic examples of sculptures that soar to the high heavens. The figure is clad in clouds — as the name of this sect of Jains, digambara, who venerate this enlightened being, signifies — and its naked limbs and form are perfectly proportioned. The flicker of a smile on its lips reflects inner peace, calm and spiritual attainment. The noble figure may be about 10 times shorter than the Sardar Patel statue, but in artistic excellence it far surpasses that monumental representation, besides being the perfect embodiment of peace everlasting. It is after all an idealized figure from which the flaws and imperfections that are intrinsic to human flesh have been erased to create an image of a human being who remains untouched by the claws of time.

However, when the figures of actual human beings are blown up to such gargantuan proportions, the blemishes that are unavoidable in reality are magnified. In the case of the Patel statue, the ordinary flaws are exaggerated 110 times if we take the average height of an adult Indian to be 5 ft 5 inches. Gulliver’s reaction to the physicality of the Brobdingnagians begins to seem relevant: “Their skin appeared so coarse and uneven... with a Mole here and there as broad as a Trencher, and Hairs hanging from it thicker than Pack-threads”.

If India had any connect with its vaunted past, surely this would not have happened. We forget that unless they are created on a human scale — like the excellent statues of our colonial masters that once dotted Calcutta’s Maidan — such figures of the great and the good look as though they are victims of extreme hormonal imbalance resulting in gigantism. This is evidence enough of the intellectual bankruptcy of the ruling classes of our country. Why else would they commission colossal statues of Rama and Hanuman whose inspiration could only be calendars?

The Patel statue may be an indirect embodiment of the height of megalomania, but such grandiloquent gestures are typical of the men and women of straw who commission these and make decisions for us. Towards the end of her journey, Dorothy discovers that the Wizard of Oz, the Great and Terrible, is just a pathetic, bald and wizened old man. Similarly, people will one day find out that individuals with inflated egos, who are often in power, who lord it over us and are incapable of looking beyond their own petty selves, are actually humbugs.