Torn between the professional and the personal 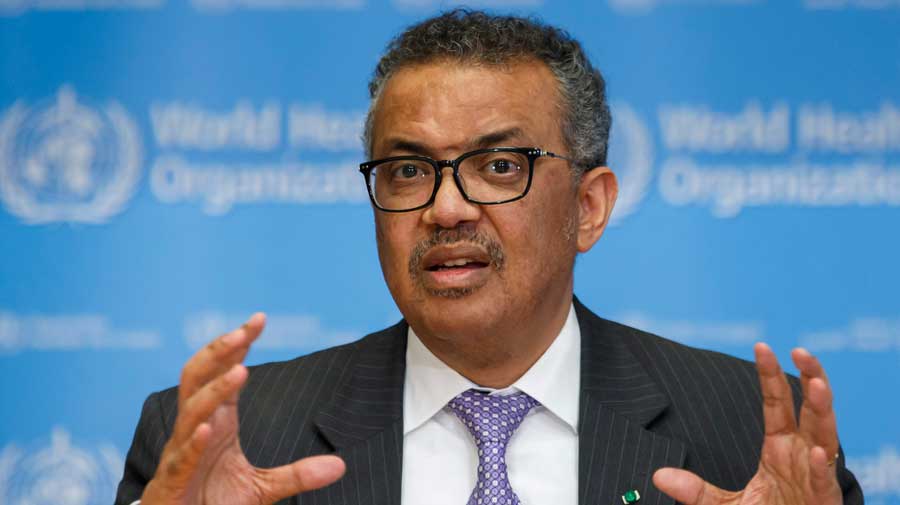 The public sees Tedros Adhanom Ghebreyesus devoting everyday to managing the pandemic, but privately he is also managing his pain about Tigray.
File picture
Nicholas Kristof   |   Published 02.05.21, 01:03 AM

He is the world’s doctor, and for months he has tirelessly led the global response to the coronavirus pandemic while privately nursing a piercing anguish. Tedros Adhanom Ghebreyesus, the director-general of the World Health Organization, has largely kept his pain secret, maintaining a stoic public front. But when I probed, he wept.

Tedros is from Tigray, a part of Ethiopia that since November has endured crimes against humanity by Ethiopian and Eritrean soldiers. The US secretary of state, Antony Blinken, has properly described atrocities in western Tigray as ethnic cleansing, but the world has largely been indifferent.

Tigrayan children are starving to death, men have been clubbed to death, and women and girls have been subjected to mass rape. Ethiopian Opposition parties claim that more than 50,000 people have been killed — that is not verifiable, and the toll is unknown — and the scale of torture, starvation, murder and destruction in the past few months may have been the worst in the world.

His cousin, a 68-year-old woman, was killed while trying to take shelter in a church, he said. Another relative, a 16-year-old high school student, was shot in the street. Internet and telephone links have been cut off, so Tedros can’t reach family members in Tigray to get more information about who has been tortured or murdered.

My colleague, Declan Walsh, has reported on atrocities, such as a 26-year-old man being beaten to death with beer bottles and girls as young as eight being sexually assaulted.

The United Nations humanitarian chief, Mark Lowcock, described a woman whose husband was killed, who lost her unborn baby and who then was gang-raped in front of her children.

Even though Tedros is one of the world’s most recognized public servants, he may have become a refugee. He is now based at the WHO headquarters in Geneva, but he would probably not be safe if he tried to return to Tigray. Ethiopia’s military chief has denounced him as a criminal.

I’ve known and admired Tedros for 15 years, but we have periodically tangled over his deference to dictators. I asked Tedros about that, but he didn’t want to discuss politics of any kind — including whether countries should pressure Ethiopia to stop the slaughter of Tigrayans. He seems deeply conflicted, torn between what he sees as a professional duty to his organization to be impartial and the horror of an ethnic cleansing of his own people.

Presiding over these crimes against humanity in Tigray is Prime Minister Abiy Ahmed of Ethiopia, who came to power in 2018 and was initially hailed as a great reformer; he even won the Nobel Peace Prize in 2019. Abiy is a pro-Western figure over whom the United States of America has considerable influence — if it will only use it.

After taking power, Abiy reined in Tigrayans and dispatched troops in November to crush what he said was a mutiny in the region. That triggered a civil war with Tigray fighters, and Eritrea’s army entered to back up Ethiopia’s forces. There is also a risk of a wider war involving Sudan. All sides in the conflict have committed atrocities, but by far the most serious and credible allegations are against the Ethiopian and Eritrean armies and their allies.

As WHO chief, Tedros has tried to get vaccines distributed more equitably around the world, while dealing with Donald Trump’s appalling decision to pull the US out of the WHO (overturned by President Joe Biden on his first day in office). In public, Tedros is focused on Covid-19 and has mostly kept quiet about atrocities in Tigray. “The public sees Tedros devoting every day to managing the pandemic, but privately he is also managing his pain about Tigray,” said Annie Sparrow, an assistant professor at Mount Sinai School of Medicine, who was an adviser to Tedros.

Tedros was reluctant to give this interview, but when he did his torment was unmistakable. “We have Covid and are doing our best. On top of that, to have this pain,” he began, and then the stoic broke down. For more than a minute, he couldn’t speak and sobbed.

I respect a man who loses it when contemplating war crimes. I wish more would. And I hope President Biden and other world leaders will hear that agony on behalf of so many in Tigray who are being starved, raped and murdered, and will use their influence to end this catastrophe.