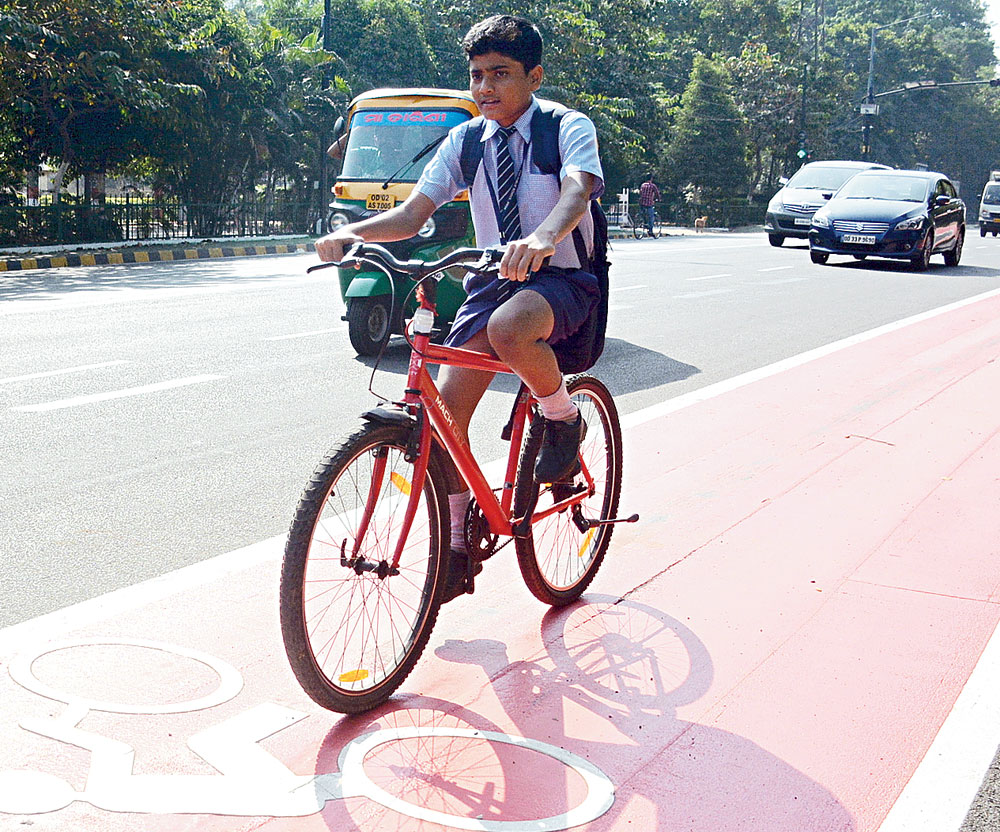 Quick fix: A boy rides a cycle on the demarked portion of the road painted in red in Bhubaneswar on Saturday.
Picture by Ashwinee Pati
Sandeep Mishra   |   Bhubaneswar   |   Published 24.11.18, 06:42 PM

The local urban development authority has developed fresh cycle tracks and restored existing ones in various parts of the city as chief minister Naveen Patnaik is going to launch much-awaited public bicycle sharing programme in the state capital on Monday.

Naveen will launch the programme under the banner Mo Cycle as part of which as many as 1,500 modern bicycles will be provided to the residents of Bhubaneswar who would be able to take those bicycles on rent by paying some little money and roam around the city with ease without hurting the environment.

“The public bicycle sharing programme is one of the ambitious projects of the smart city mission. We have hired two agencies that have provided the bicycles for the programme. The agencies will run the programme while Bhubaneswar Development Authority (BDA) is helping to create the infrastructure for it,” said mayor Ananta Narayan Jena.

However, running short of adequate space to develop the new tracks for the bicycle sharing programme, the BDA has come up with a unique alternative and painted significant portions of various thoroughfares of the capital city with red colour marking the stretches for bicycles only.

“We have painted at least one meter of the roads on both sides red and also put bicycles logos on it marking it specially for the bicyclists. The cyclists will be using the tracks and other vehicles will not be allowed on it. We are also making attempts to free the spaces from irregular parking of vehicles,” said a smart city official.

The city had a mere 11 kilometres of dedicated cycle tracks on major roads such as Janpath, Bidyut Marg, Rajpath and Sachivalaya Marg. However, with the fresh marking of the tracks with red colour, the administration is planning to increase the track length to almost 500 kilometres.