Startled there was no whisper in Parliament after Supreme Court struck down NJAC Act: Dhankhar

Citing provisions of the Constitution, the Vice President also said when a substantive question of law is involved, the issue can be looked into by the courts 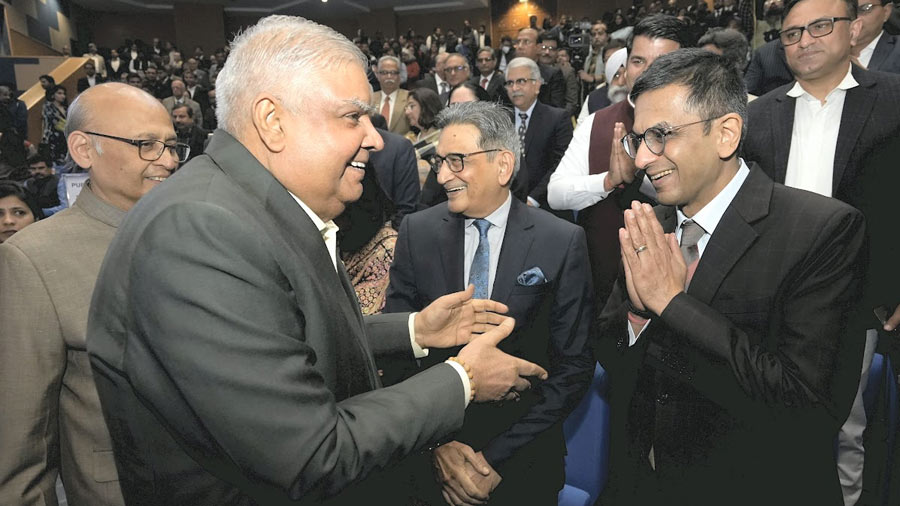 Vice President Jagdeep Dhankhar on Friday said there was "no whisper" in Parliament after the Supreme Court struck down the National Judicial Appointments Commission Act and described it as "too serious an issue".

He also said a law passed by Parliament, which reflects the will of the people, was "undone" by the Supreme Court and "the world does not know of any such instance".

Citing provisions of the Constitution, he also said when a substantive question of law is involved, the issue can be looked into by the courts.

"Nowhere it says a provision can be run down," Dhankhar said in the presence of Chief Justice of India D Y Chandrachud.

Addressing the L M Singhvi memorial lecture here, the vice president underlined that the Preamble of the Constitution mentions "We the people" and Parliament reflects the will of the people.

It means the power resides in the people --- their mandate and their wisdom, he said.

Dhankhar referred to the NJAC Act, saying in 2015-16, Parliament was dealing with a constitutional amendment Act and as a matter of record the entire Lok Sabha voted unanimously.

In Rajya Sabha, it was unanimous, there was one abstention. "We the people their ordainment was converted into a constitutional provision. Power of the people, which was expressed through a legitimate platform, that power was undone. The world does not know of any such instance," he said.

The NJAC Act, which sought to overturn the collegium system of appointing Supreme Court and high court judges, was struck down by the top court which described it as unconstitutional.

"I appeal to the people here, they constitute a judicial elite class, thinking minds, intellectuals - please find out a parallel in the world where a constitutional provision can be undone," he said.

Dhankhar had expressed similar sentiments at a Constitution Day event here on November 26.

He said he was "startled that after this verdict (NJAC), there was no whispering in Parliament. It was taken as such. This is too serious an issue".Referring to the doctrine of basic structure developed by the apex court, he said "we have taken it as such".

"But as a modest student of law, can parliamentary sovereignty ever be compromised ... can a successive Parliament be bound by what has been done by earlier Parliament," he said.

He said harmonious working of the Executive, the Legislature and the Judiciary is vital for the growth of democracy.

"Any incursion, howsoever subtle, in the domain of one by another has the capacity to unsettle the apple cart of governance," the vice president said.