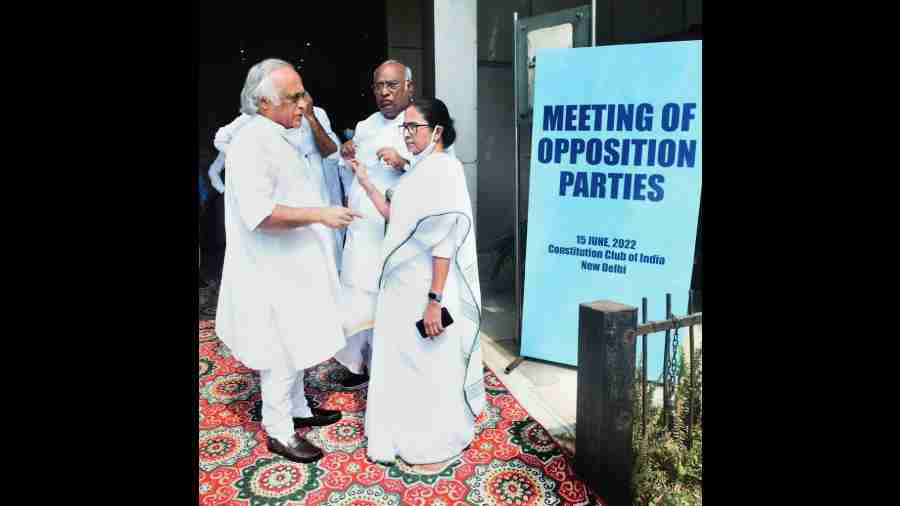 The Opposition meeting to choose a joint presidential candidate on Wednesday expressed overwhelming support for Sharad Pawar but the NCP veteran voiced unwillingness to quit active politics at this critical juncture.

Bengal chief minister Mamata Banerjee, who had invited all the Opposition parties to the meeting, herself proposed Pawar’s name and everyone else present supported the idea.

Although Mamata mooted two other names in case the reluctant Pawar eventually opted out — Gopalkrishna Gandhi and Farooq Abdullah — there was no discussion on their possible candidature.

Mamata has clearly decided to push for Pawar’s candidature. Sources revealed that she had told BJP leader Rajnath Singh, who contacted her on behalf of the ruling establishment to explore the Opposition’s mind, that the NCP leader was the most suitable candidate.

Pawar’s wide political friendships make him the sole Opposition candidate likely to put up a credible fight at a time the dynamics of the electoral college are favourable to the BJP.

“Only Pawar Saheb has the capacity to bring additional votes from the parties that usually don’t come to us,” Mamata said at the meeting.

But Pawar said he was not mentally prepared to quit active politics at this stage.

The NCP veteran, pivot of the unlikely Maharashtra coalition that has kept the BJP out of power, intends to play a significant role in the 2024 parliamentary elections. Maharashtra has 48 seats and the NCP-Congress-Sena combine has the potential to substantially whittle down the BJP’s tally from the state.

But that is not the primary reason for Pawar’s reluctance. Those who know him say in private that he would accept the challenge only if there is a real contest.

If parties like the Biju Janata Dal, Aam Aadmi Party, Telangana Rashtra Samiti, YSR Congress and the Akali Dal --- which didn’t attend Wednesday’s meeting despite being invited --- refuse a commitment of support, Pawar will not waste his time fighting the presidential election.

If a wider support looks like developing, his candidature will quietly take shape amid his denials and professions of reluctance.

Enough time is left before these parties’ next meeting on June 21. Key leaders will reach out to the fence-sitters and the parties implicitly or overtly friendly with the BJP.

TRS chief K. Chandrashekar Rao has already said he cannot be part of a group that involves the Congress.

Mamata, however, showed no hostility towards the Congress, which sent three representatives – Mallikarjun Kharge, Jairam Ramesh and Randeep Surjewala --- to the meeting.

Instead, Mamata attacked the Narendra Modi government for its bulldozer politics, violation of constitutional principles and harassment of Sonia Gandhi and Rahul Gandhi through the Enforcement Directorate.

She had expected a resolution to be adopted on the current political situation but the dominant view was that a lengthy three-page statement was uncalled for at this stage.

Only a brief statement was issued, declaring the need for a common candidate who can serve as custodian of the Constitution and prevent further damage by the Modi government.

Mamata mentioned the BJP’s bulldozers --- being deployed against the properties of alleged rioters – during her post-meeting media briefing.

Kharge told the meeting: “I want to say clearly that the Congress party will play a constructive role in ensuring that the parties assembled here this afternoon arrive at a consensus candidate in the next few days. Let us be proactive and not reactive. The Congress has no particular candidate in mind. It will sit together with all of you and arrive at a candidate acceptable to all.”

He added: “I am aware that many of the parties around this table compete with each other in Assembly elections. But that has not prevented this meeting from taking place. Each one of us has taken a larger national view and come here for a bigger cause. Let this spirit continue.

“Let me close by saying that we must remain united and disciplined and not score political points against each other. The unity we demonstrate now will have implications going well beyond the presidential polls.”