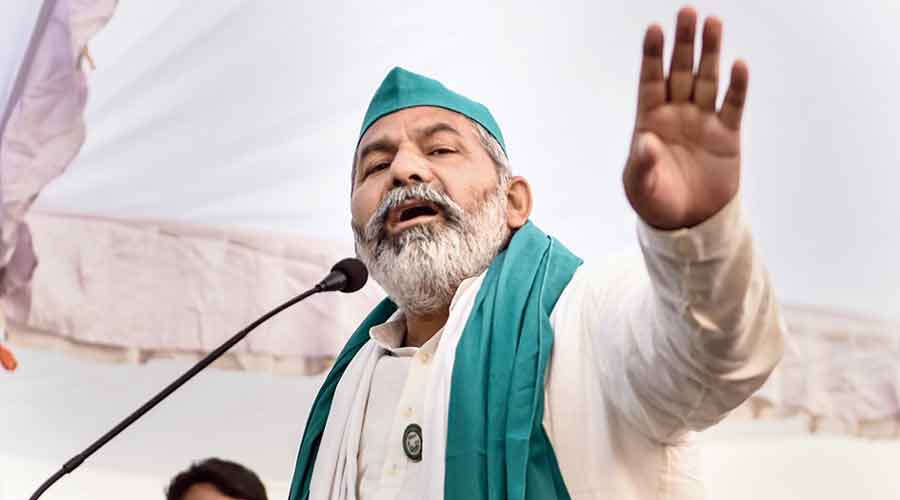 Thousands of farmers gathered for a Kisan Mahapanchayat in Lucknow on Monday and heard their leaders reaffirm that their movement would not end until the Narendra Modi government had accepted all the farmers’ demands.

The meeting resounded with calls to defeat the BJP in the Uttar Pradesh elections and with slogans demanding the dismissal and arrest of Union minister Ajay Mishra Teni over the Lakhimpur Kheri atrocity.

“When we arrived on Delhi’s borders on November 26 (last year), we had not thought it would take a year,” Darshan Pal Singh, a leader of the Samyukta Kisan Morcha that is spearheading the movement, said in his address

“But your unity and wise decisions demolished a dictator who for seven years had refused to retreat an inch (on any issue). I congratulate you.”

In the crowd at the first public gathering of farmers since Prime Minister Modi’s sudden announcement of the repeal of the three farm laws were the families of the four farmers and one journalist mowed down by Teni’s SUV in Lakhimpur Kheri on October 3.

Bharatiya Kisan Union (BKU) spokesperson Rakesh Tikait told the gathering it would be naïve to simply take the central government at its word. Harinam Singh, also of the BKU, said the farmers must make sure that Modi’s assurance on repealing the contentious farm laws does not prove to be mere “chunavi jumla (election-speak)”.

“They did the right thing by withdrawing the laws but tried to divide farmers by saying that they failed to make only some farmers understand the laws,” Tikait said.

He laughed away reports that the Centre would form a committee to resolve the farmers’ remaining demands.

“The government doesn’t need a committee to decide minimum support prices for farm produce. As chief minister of Gujarat in 2011, Modi had sent a report to the then Manmohan Singh government seeking a law on MSPs for farmers,” he said. “It’s still lying with the government. Modi is Prime Minister now and would have implemented it if he had good intentions for us.”

On Sunday, the Morcha had written an open letter to Modi seeking talks to address their remaining six demands, including the law guaranteeing MSPs for all farm produce and the dismissal and arrest of Teni.

Besides these, the farmers want the withdrawal of a draft electricity bill that threatens power subsidies, the removal from anti-pollution legislation of a clause prescribing strict punishment for stubble-burning, compensation for the farmers who died during the yearlong agitation and withdrawal of “false” cases against protesting farmers.

“We have placed our demands…. Unless the Centre holds a meeting with farmers and resolves these issues, we shall teach them a lesson in the 2022 (Uttar Pradesh) Assembly elections and then the 2024 Parliamentary elections,” Tikait said.

Darshan asked the farmers to raise their hands if they supported the demand for Teni’s dismissal.

Teni’s son Ashis Mishra was allegedly in a Thar jeep belonging to his father that is accused of mowing down the four farmers and a journalist in Lakhimpur Kheri. Ashis has been arrested. Teni had a few days before the carnage threatened to fix the protesting farmers.

Darshan, who is from Punjab, said the Morcha had prevented the BJP’s ministers, MPs, MLAs and office-bearers in Punjab and Haryana from holding public meetings and that this had also begun to happen in Uttar Pradesh and Uttarakhand.

“There’s an election in Uttar Pradesh in 2022.... Raise your hands and give us a guarantee that you will defeat the BJP,” Darshan said.

“We will defeat the BJP in Uttar Pradesh the way we defeated them in Bengal. They have decided to withdraw the three farm laws but the farmers are in debt and 4-5 lakh farmers have committed suicide. Farmers are not getting the right price for their produce,” he added.

“We shall keep fighting till every farmer is free of debt, till they get the right price for their produce.”

Abhimanyu Kohar of the Bharatiya Kisan Mazdoor Mahasangh said: “We cannot give up our struggle midway. We cannot return home empty-handed. We have to secure the MSP law.”

Like many other speakers, he stressed the role played by gurdwaras in keeping the movement alive with their langars (free kitchens), apparently to counter those attempting to divide the farmers on religious lines by alleging Khalistani influence on the protests.

Ashok Dawale, president of the All India Kisan Sabha, said the farm laws were “part of the Modi-(Amit) Shah agenda to sell the country to Ambani-Adani”.

“This struggle succeeded because we were united; farmers from every religion participated in this movement,” he said.

Asked whether the farmers’ movement had become political, Tikait chose to take a dig at the BJP and AIMIM leader Asasuddin Owaisi, suggesting they were colluding to divide the Muslim vote.

“The government is political and so are we. You can see that Owaisi is roaming around Uttar Pradesh to help the BJP. We call him the ‘chacha’ (uncle) of the BJP,” he said.

“But the farmers have no religion; they belong to the farming religion and cannot be divided.”

Joginder Singh Ugrahan of BKU (Ekta-Ugrahan), an organisation primarily of peasants that is conducting the Tikri border protest and challenges the narrative that the movement benefits only a few rich farmers,  said: “We have won but not fully… and must continue this fight for our rights.”

Additional reporting by our Delhi bureau, Reuters and PTI

Farmers to march to parliament