Around 7.80 lakh jawans travelling on official work, leave and transfer will be eligible for free flights to and from Srinagar 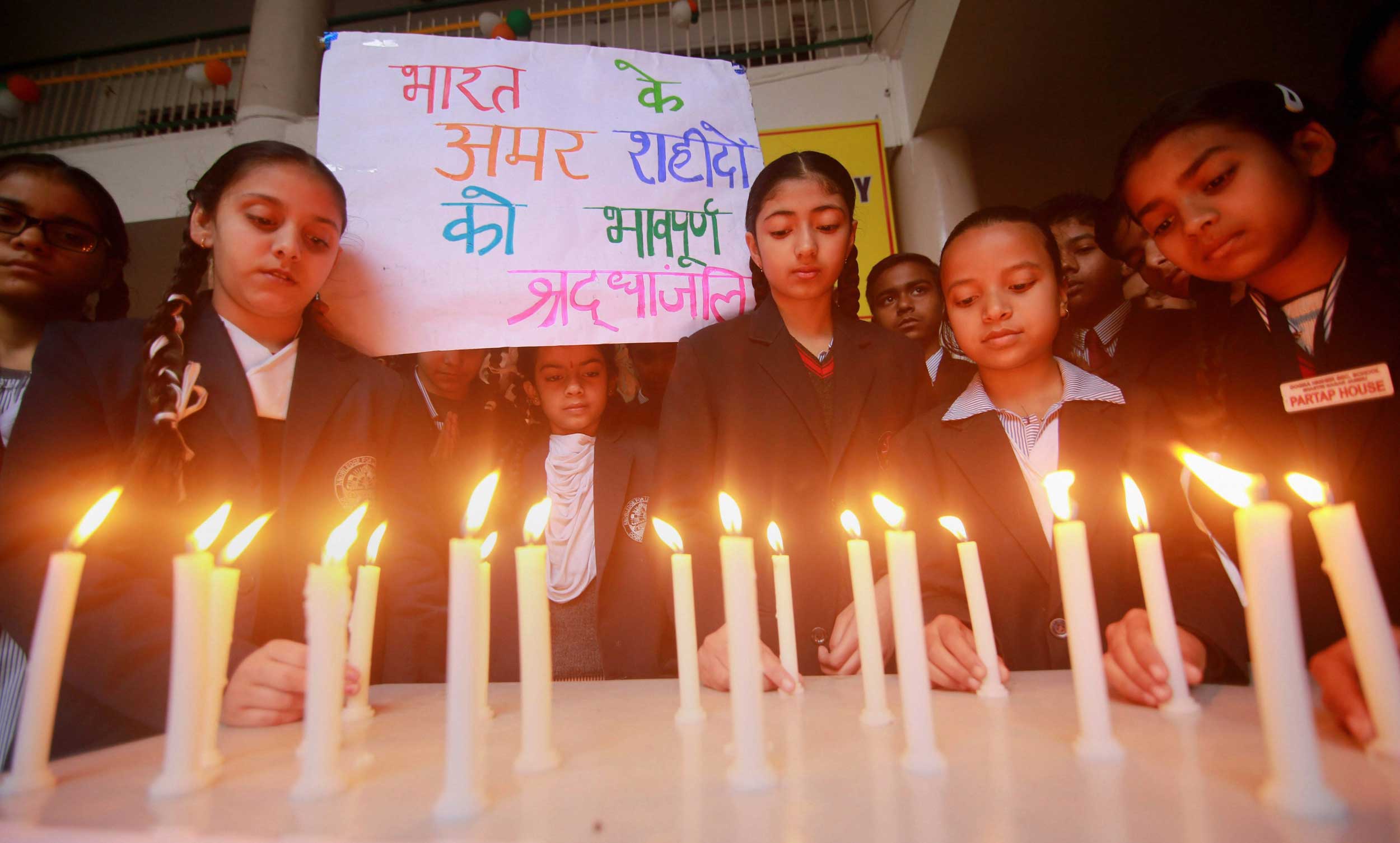 Students light candles to pay tribute to the soldiers killed in the Pulwama terror attack at a school in Jammu on Thursday.
PTI
Imran Ahmed Siddiqui   |   New Delhi   |   Published 21.02.19, 09:42 PM

Jawans of central forces deployed in Kashmir can fly free on commercial flights, the Union home ministry has announced exactly a week after the Pulwama attack on CRPF personnel who were reportedly not allowed to be airlifted to clear a weather-induced backlog.

The free flight scheme has no direct link with a separate and existing air courier scheme that would have been activated for mass transportation had permission been given last week when the Pulwama attack took place.

But the number of soldiers gathered on the highway would have been somewhat fewer than the 2,500 amassed there had the free-flight scheme been in force.

Under the scheme announced on Thursday, around 7.80 lakh jawans travelling on official work, leave and transfer will be eligible for free flights on the Delhi-Srinagar, Srinagar-Delhi, Jammu-Srinagar and Srinagar-Jammu routes.

Earlier, only officers of the ranks of inspector and above were entitled to free air travel. The Pulwama attack had taken place on the Srinagar-Jammu highway and constables or jawans had borne the brunt.

“Better late than never,” a home ministry official said, adding that the movement of convoys by road can still not be avoided but care would be taken to ensure the number is not as large as the 2,500 in Pulwama last week.

Bengal chief minister Mamata Banerjee said in Calcutta: “The patient has already expired. Why should our jawans give their blood? Their request for a no-objection certificate (for an airlift) was turned down at that time.”

The home ministry official described Thursday’s decision as “pragmatic”, adding that it would allow more security personnel to take the aerial route to and from Kashmir.

“The government seems to have grown wiser from the high number of casualties in last week’s terror attack,” the official said.

The movement of convoys, he said, on road for logistical and operational reasons will continue to be necessary. “But the number of convoys won’t be like the one (78) that was targeted by the suicide bomber,” he said.

There has been a controversy over reports that the CRPF had sought choppers to ferry the 2,500 jawans, who were stuck because of bad weather, from Jammu to Srinagar, but the home ministry allegedly did not grant permission.

On February 14, a car suicide bomber rammed his vehicle into a bus in the convoy in Pulwama, triggering the deadliest attack on security forces in Kashmir in which 40 personnel were killed.

Questions had been raised on the possible compelling reason to ferry over 2,500 troopers together and turn them into a high-risk target.

“The decision (of free air travel) will immediately benefit approximately 780,000 personnel of the CAPFs (central paramilitary forces) of the ranks of constable, head constable and ASI, who were not eligible earlier. This includes journey on duty and journey on leave, that is while going on leave from J&K to home and return,” Union home minister Rajnath Singh said.

The new facility, sources said, is in addition to the existing air courier services for central paramilitary forces where an entire aircraft is booked for personnel to travel between Delhi and Jammu or Srinagar to cut down on travel time.

The home ministry said the air courier service was already available in the Jammu and Kashmir sector, and it was extended in December 2017 to cover more routes such as Delhi-Jammu, Jammu-Delhi, Jammu-Srinagar and Srinagar-Jammu.

“The number of flights was further extended in December 2018. In addition, air support is provided from the Indian Air Force as and when required,” the home ministry said in a statement.

Junior minister Jitendra Singh said the latest order was a “path-breaking” decision for the security forces. “This is a path-breaking decision. It’s going to be a huge relief and is also a show of respect to our security personnel,” he said.

Nearly 66,000 CRPF personnel are deployed in Jammu and Kashmir for counter-terrorism operations. There also are troops of the Border Security Force, Indo-Tibetan Border Police, Central Industrial Security Force, Sashastra Seema Bal and the National Security Guard in the Valley for services related to the internal security grid.