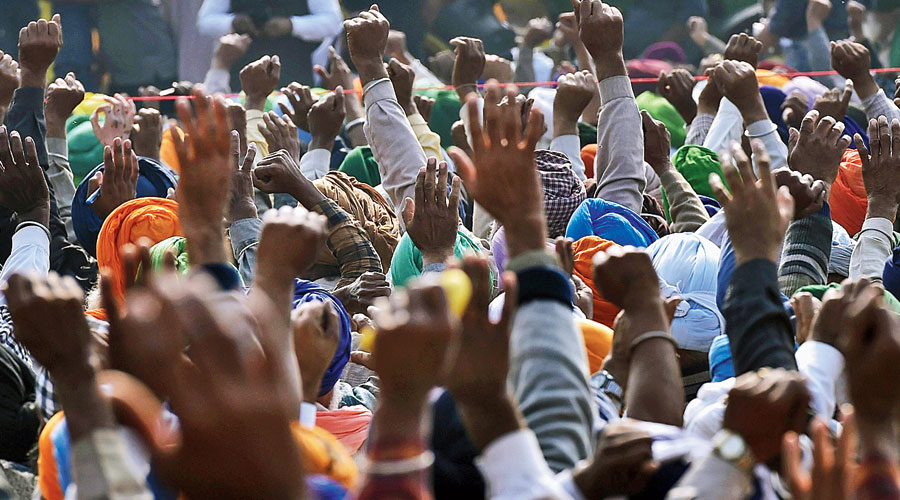 Farmers' groups met three Union ministers on Thursday for the fourth round of talks amid an ongoing protest seeking repeal of the new farm laws. Union Agriculture Minister Narendra Singh Tomar, Railways, Commerce and Food Minister Piyush Goyal and Minister of State for Commerce Som Parkash, who is an MP from Punjab, are holding talks with the representatives of 35 farmers' unions at the Vigyan Bhawan in the national capital. The government said that the meeting started in the afternoon and discussions are being held in a cordial atmosphere. On December 1, talks between both the sides ended in a stalemate after farmers' groups rejected the government's suggestion of a new committee to look into issues raised by farmers protesting against the new laws.
(PTI)
J.P. Yadav   |   New Delhi   |   Published 03.12.20, 03:25 AM

The BJP leadership continued to adopt an unbending position on the new farm laws amid murmurs of “miscalculation” from some within the party and the RSS, as the farmers’ protest intensified on Wednesday.

Party insiders said the government might be open to a few “minor changes” to the three new laws but there was no question of repealing them, as demanded by the agitating farmers.

“Like the Shaheen Bagh protests (against the new citizenship regime), this one too is an effort to mislead a section of the farmers and build a political movement against Narendra Modi,” a BJP general secretary said. “There’s no question of relenting here, either.... The government will convince the farmers and resolve the situation amicably.”

Some doubters within the party and the RSS, however, fear that the government may have “miscalculated” and have urged the leadership to “handle it with care”.

“Sikh farmers are leading the protests. It would be foolish to underestimate their tenacity,” a senior BJP leader who does not hold any post said.

He said that unlike the tactic adopted against the Shaheen Bagh protesters, the government couldn’t possibly label the farmers, particularly the Sikhs, as “anti-nationals” and win the perception battle.

Ideologically, the RSS attaches great importance to a harmonious relationship between Hindus and the Sikhs of Punjab whose home state borders Pakistan.

Atal Bihari Vajpayee had struck an alliance with the Shiromani Akali Dal keeping this in mind. Now with the Akali Dal dumping the NDA over the new farm laws and Sikh farmers at the barricades, the doubters in the party anticipate a period of turbulence.

Many others, however, are confident that Prime Minister Modi and home minister Amit Shah would weather the crisis just as they have weathered farmers’ agitations in the past too.

They referred to the movement in Mandsaur, Madhya Pradesh, where six farmers were shot dead during an agitation for better prices in 2017, and how the party had succeeded in quelling it.

The BJP’s official Twitter handle continued to portray the new farm laws as beneficial for the farmers and the protests as politically motivated.

So far, the government has deployed the junior leadership, using agriculture minister Narendra Singh Tomar and commerce and industry minister Piyush Goyal as an advance team to get a sense of the situation before the seniors step in.

Shah and BJP chief J.P. Nadda have been holding internal briefings with Tomar and Goyal but have stayed away from the talks with the farmers’ representatives.

Defence minister Rajnath Singh, an old hand at complex negotiations, was scheduled to lead the talks with the farmers on Tuesday but was pulled out at the last moment, sources said.

“Amitbhai and Rajnathji will step in after getting a sense of the situation and after considering all the options to defuse the crisis,” a BJP insider said.

Party sources said the government firmly believed that the new laws represented much-needed reforms in the farm sector and going back on them would be disastrous.

“The government may consider bringing a few amendments to address the farmers’ concerns, but no material change will be made,” a source close to Rajnath said.

He didn’t specify what amendments the government was ready for.

The minimum that the agitating farmers want is a legal guarantee saying no private buyer can purchase from farmers below a minimum support price. BJP managers feel that such an amendment would defeat the main objective of the new laws.