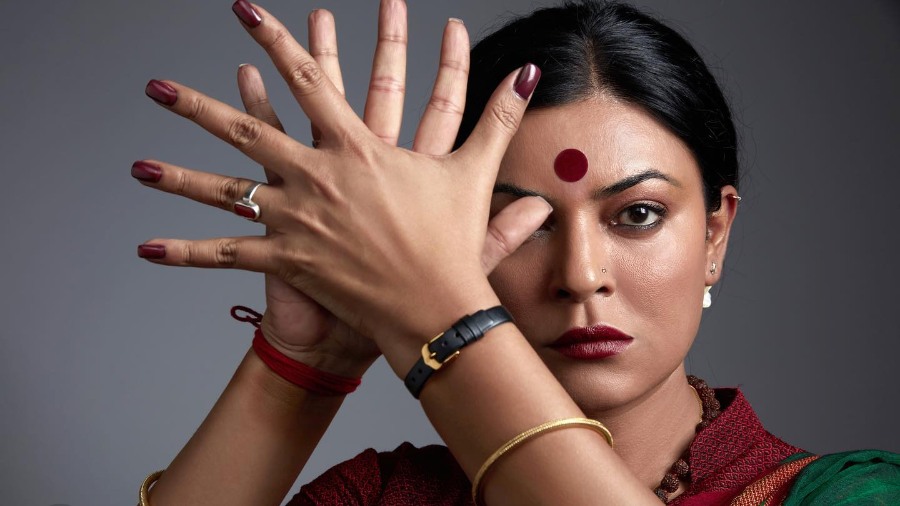 Sushmita Sen is set to play transgender activist Shree Gauri Sawant in her next project Taali, a six-episode series directed by Marathi filmmaker Ravi Jadhav, the actress announced on Instagram on Thursday.

The 46-year-old, who received critical acclaim for her role in crime thriller series Aarya, also shared her first look as Gauri from Taali on social media on Thursday.

Sushmita can be seen in a maroon and green sari, big bindi, emoting the handclap gesture in the character drop photograph.

“Nothing makes me prouder & more grateful than to have the privilege of portraying this beautiful person & of bringing her story to the world!!

Here’s to life & to everyone’s right to live it with dignity!!! I love you guys!!! #duggadugga,” she wrote.

Sushmita’s elder daughter Renee Sen dropped a supportive comment for her mother on Instagram: “So so so so proud of you… I love you the mostest.”

The web series is a biopic on Gauri, the founder of the Mumbai-based NGO Sakhi Char Chowghi Trust that works for the welfare and development of the transgender community and promotes safe sex. The series will focus on various aspects of Gauri’s life, including her struggle to become India’s first transgender mother. Gauri is also the first transgender to be appointed as a goodwill ambassador for the Election Commission of India.

Gauri took the internet by storm in her powerful portrayal of a transgender mother in a Vicks advertisement in 2017. She was seen in the ninth season of Kaun Banega Crorepati later that year.

Meanwhile, Sushmita is also set to return as Aarya Sareen in the third season of Aarya on Disney+ Hotstar. The Ram Madhvani-directed web series is based on the popular Dutch drama series Penoza and also has been nominated for the International Emmy Awards in the best drama series category in 2021.