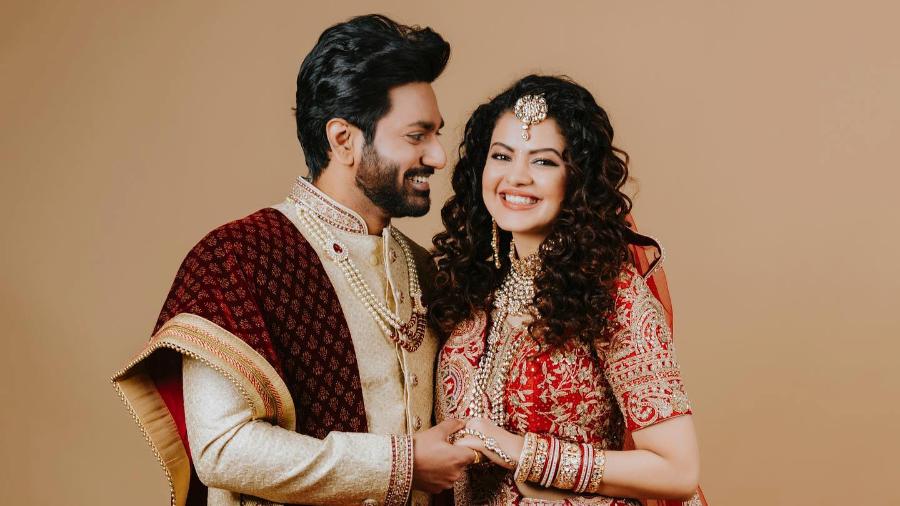 Singer Palak Muchhal and composer Mithoon, who tied the knot on November 6 in Mumbai, say that their parents played “matchmakers” for them.

“I spoke to my parents about it a few months ago, and soon they spoke to her (Palak’s) parents. Then they had a formal meeting, after which we started interacting more to understand each other,” said Mithoon.

The couple feel that they are made for each other and their compatibility makes them click as a team.

“I can say that he adds peace to my excitement,” said Palak.

“She has added so much to my perspective of life. She helped me discover various facets of my personality that I was not aware of. I met myself once again through Palak,” Mithoon added.

The singer and the composer collaborated for the first time back in 2013 for the musical hit Aashique 2. Their paths crossed several times over the years. They gradually grew closer to each other.

“Even though we have known and collaborated with each other on multiple occasions, there was never any kind of social connection between us. It was only in the last year that I felt a strong connection,” said Mithoon.

Palak added, “When the rishta (marriage proposal) came, my parents were very happy. Personally, I have always admired and respected him. All these years that we have known each other, we only met for professional reasons and always focused on our work. So, this thought (of spending our life together) never occurred to us, but now it feels like it was meant to be.”

The couple decided to have an elaborate three-day celebration in Mumbai that comprised haldi, mehendi, sangeet, shaadi and reception. But they chose to keep it an intimate family affair.

“Our wedding celebration was a reflection of our personalities. The idea was to celebrate everything with people who mattered to us a lot,” said Palak.

For Mithoon, the wedding ceremony was an emotional affair, and the reception party was a celebration of Indian traditions. “We both are very proud of our culture, and right from the decor and clothing, to the food, we tried our best to celebrate it.”

Speaking about fans celebrating the couple’s wedding, Mithoon said, “Though we kept the celebrations low-key, I learnt that in Indore (Palak’s hometown), there were people who joined in the bandwagon by bursting crackers on the streets. They (fans) were really excited about this development in Palak’s life. She inspires people and I am also inspired by her.”

The composer also spoke about his relationship with Palak’s family, “I have developed a beautiful relationship with her family. Palak’s mom has been very protective of her. She has always been by Palak’s side. The day she gave Palak’s hand to me, I felt blessed.”