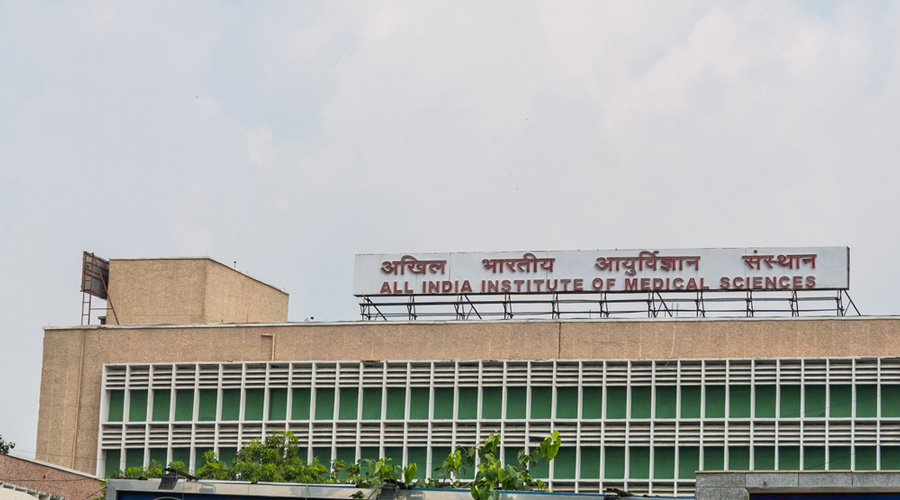 The BJP has pledged three All India Institutes of Medical Sciences (AIIMS) — in north Bengal, the Sunderbans and Jungle Mahal — a medical college in every Bengal district, a twofold increase in postgraduate medical seats and the eradication of malaria and dengue, among other promises.
File picture
G.S. Mudur   |     |   Published 04.04.21, 01:48 AM

The BJP poll manifesto’s promises to Bengal on healthcare reflect the Narendra Modi government’s policies at the Centre that, some experts say, lack adequate efforts to bolster public hospitals or regulate the private sector.

The BJP has pledged three All India Institutes of Medical Sciences (AIIMS) — in north Bengal, the Sunderbans and Jungle Mahal — a medical college in every Bengal district, a twofold increase in postgraduate medical seats and the eradication of malaria and dengue, among other promises.

The party’s legislators assert that a BJP win in Bengal would improve health services across the state through the two schemes and through efforts to “incentivise the private sector” to establish more hospitals in the state, including rural areas — another pledge in the manifesto.

However, experts flagged the Centre’s inadequate budget allocations for the HWCs and stressed that Bengal already had a scheme, Swasthya Sathi, that too covered up to Rs 5 lakh in hospital expenses and, unlike the PMJAY, was open to everyone.

They also underlined that contrary to what some BJP lawmakers were saying, Bengal was not a laggard in healthcare — it bettered not just the national average but the performance of many BJP-ruled states in several health indicators.

From its launch in September 2018 till March 31 this year, the PMJAY had supported over 1.77 crore hospital admissions, providing treatment or surgical services to patients with cancers, cardiovascular disease, bone problems, obstetric and gynaecological conditions and other illnesses.

“Another big initiative has been the addition of colleges, and undergraduate and postgraduate medical seats. This will impact healthcare in the long run,” Rajdeep Roy, a BJP legislator from Silchar, Assam, said.

Subhas Sarkar, BJP Lok Sabha MP from Bankura and member of the parliamentary committee on health, said Bengal’s health sector had suffered over the years from general neglect.

Roy said the Bengal government’s “obstructionist policies” had stalled improvements in healthcare in the state.

Health experts, however, say Bengal isn’t doing so badly. “Some of its health performance indicators are better than the national average and significantly higher than those in several other states,” said Indrani Gupta, a health economics professor at the Institute of Economic Growth, Delhi.

Despite the quantifiable gains from the PMJAY and the HWCs, Gupta and other experts are concerned that the Modi government has not done enough to correct India’s low spending on healthcare and that the PMJAY is diverting public resources into an unregulated private healthcare sector.

The government’s 2017 National Health Policy had announced a phased increase in the public spending on health, from 1 per cent to 2.5 per cent of the GDP by 2025.

“We’re nowhere near that goal. Public spending remains near or below 1 per cent of the GDP even now,” said Indranil Mukhopadhyay, associate professor of public health and economics at the O.P. Jindal Global University.

The parliamentary standing committee on health had last year said that to reach the target of 2.5 per cent of the GDP by 2025, the Centre should allocate Rs 160,000 crore for health in 2021-22. “The actual allocation is not even half this figure,” Mukhopadhyay said.

Mukhopadhyay estimates that it would take around Rs 9,400 crore per year to support 100,000 health and wellness centres. But the proposed budget allocation for the HWCs in 2021-22 is Rs 1,900 crore.

“This is less than half of what (the existing) 50,000 centres need to render the full range of services they were intended to provide,” Mukhopadhyay said.

A public health expert in Bengal said it would be misleading to say the PMJAY would make a big difference to healthcare because the state already has Swasthya Sathi.

“Besides, the Swasthya Sathi scheme is open not just to the poor but anyone who wants to join,” said Prabir Chatterjee, a physician with public health experience. “If the PMJAY replaces the existing scheme, some people might lose the cover.”

He added: “Three new AIIMS in the state would be very good, but this is likely to take years to become reality.”

Patients’ rights groups are concerned that the PMJAY would expand the private sector’s dominance in healthcare.

“It’s worrying because taxpayers’ funds will go into an unregulated private sector,” said Sulakshana Nandi, a public health expert and member of the Public Health Resource Network in Chhattisgarh.

The experience with the insurance-based schemes implemented in several states over the past decade suggests that they sometimes lead to unnecessary treatments or surgeries.

Nandi and others say the Modi government could have, had it wanted, introduced regulatory controls by implementing the Clinical Establishment Act passed by Parliament in 2010.