The victims include a child and six women, aged between seven and 52, and a newly married couple 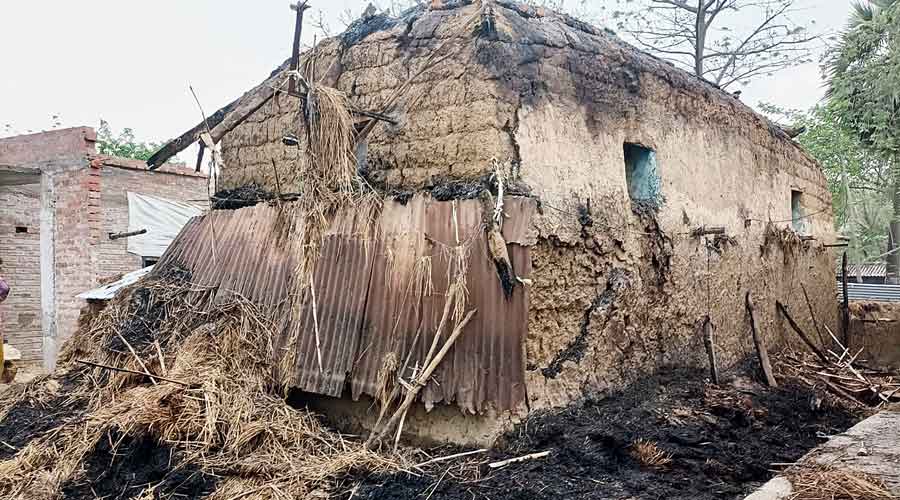 The charred bodies of at least eight persons were found in two houses at Bogtui village on the outskirts of Birbhum’s Rampurhat on Tuesday amid allegations that they were burnt alive in retaliation to the killing of Bhadu Sheikh, a Trinamul leader, on Monday night.

Calcutta High Court steps in, to hear the matter regarding Bengal violence that killed 8 at 2 pm, NDTV.com reported quoting ANI.

The victims include a child and six women, aged between seven and 52, and a newly married couple. Seven of the victims were related to one another.

“Eight people were killed in the incident. Seven bodies were recovered from a single house.… One among the three injured died in hospital,” director-general of police Manoj Malaviya said.

Located around 220km from Calcutta, Bogtui is a village with over 2,000 people.

Since the time of the Left, the village has been a victim of violence and crime — an upshot of a host of unlawful activities, such as manufacture of crude bombs, supply of arms and illegal sand and stone mining, that thrived in its vicinity.

“The village has had two groups that have been at odds with each other for the past three decades.… During the time of the Left, both the groups belonged to the Left. Since the change of guard, they have shifted allegiance to Trinamul… but their fight is continuing,” said a source.

The carnage — the worst in recent memory in Bengal and the first such massacre after Trinamul assumed power in 2011 — came as an embarrassment for the ruling party.

Opposition leaders cited intra-Trinamul tussle for spoils as the principal reason behind the massacre. They demanded imposition of President’s rule, saying that law and order had broken down.

Chief minister Mamata Banerjee, in a letter to governor Jagdeep Dhankhar, referred to a larger plan to malign Bengal.

Government sources cited prompt action, such as the formation of a special investigation team and proceedings against some policemen, to insist that law was taking its course.

The dead have been identified as Jahanara Bibi (Doli), 38; Lili Khatun, 18; Sheli Bibi, 32; Nurnehar Bibi, 52; Rupali Bibi, 39; Kazi Sajidur Rahaman, 22; Tuli Khatun, 7; and Mina Bibi, 40. The first seven were relatives and their bodies were found in the one-storey house of Sona Sheikh. Kazi Sajidur and Lili Khatun were the newly weds.

DGP Malaviya told a news conference that the killings did not seem to have any political connection. This comment of Malaviya, even before the SIT has begun its probe, drew sharp criticism from the Opposition parties.

Anubrata Mondal, the controversial Birbhum Trinamul chief, added fuel to the fire by claiming “TV burst and tar theke agun (the fire was ignited by a TV that exploded)”.

Mondal had told a news channel in the morning that the fire could have been triggered by a short-circuit or explosion of a TV or a gas cylinder. Mondal, however, did not make any comment later in the day.

The failure of the police to curb illegal sand and stone businesses — believed to be the reason behind the killing of Bhadu who allegedly controlled the unlawful trade — also came up during the Opposition attacks.

“We all know about the role of the police in such illegal trade that is controlled by local Trinamul goons,” said BJP state president Sukanta Majumdar, who sought compensation for the victims.

A section of police officers did not rule out the possibility of the victims being hacked to death and then set on fire.

Asked whether the victims were burnt alive or killed before their bodies were set on fire, Birbhum SP Nagendra Nath Tripathi said: “It is an investigation issue and the SIT is inquiring into the matter.”

He added that 11 persons had been arrested in connection with the incident while raids were on for other suspects.

A police source said the mass killings were the result of the outrage among close aides and supporters of Bhadu, a deputy chief of the Trinamul-run Barshal gram panchayat, who was killed when assailants belonging to his rival camp hurled crude bombs on Monday night.

“Claims have been made that the victims belong to the families of those accused in the murder. If so, the incident is a retaliatory action to Bhadu’s killing,” said a police officer.

Some eyewitnesses and relatives of the victims said around 100 bike-borne attackers entered Bogtui around 9.30pm on Monday, within half an hour of Bhadu’s death, and ran riot for several hours, killing people and setting houses on fire.

“No one is alive in our house apart from me, my aunt and mother. My mother and aunt are injured. They did not spare a small child either. You will be shocked if you see their bodies,” said Khusi Khatun, a girl from the village.

“They sprinkled petrol and used bombs to set houses on fire. They were claiming that our family was responsible for the murder of Bhadu. The police did nothing to help us,” she said.

Within hours of the incident, the SIT was formed and later Malaviya set out for Rampurhat. Senior minister and Trinamul leader Firhad Hakim took a helicopter to reach Rampurhat within three hours of the news of the mass killings reaching Nabanna.

“The police will certainly arrest the criminals regardless of their political colours. I have talked to senior officers who will find the conspirator behind the incident,” said Hakim, who camped in Rampurhat after meeting the family members of the victims.

Although the ruling establishment sent senior police officers and ministers to the village to pacify the residents, the situation remained fraught through the evening.

“We know that a SIT has been formed, but we want a CBI probe,” said Mihilal Sheikh, who fled the village on Monday night when the mayhem was on.

The tremors of the Rampurhat massacre were felt in Calcutta with Opposition MLAs trying to raise the issue in the Assembly and seeking the resignation of the chief minister. Although their demand for a discussion on the carnage wasn’t allowed, the ruling party was clearly on the back foot.

Advocate Smarajit Roy Chowdhury mentioned the matter before a division bench headed by Chief Justice Prakash Shrivastava, seeking approval to move his PIL and saying the state-appointed SIT would not be able to carry out an impartial inquiry.

In the second half, advocate Phiroze Edulji mentioned the issue before the same bench and sought permission for moving his PIL. Edulji demanded a probe by the National Investigation Agency or the CBI to find out the truth.

The chief justice asked both petitioners to file cases in the appropriate department. The court will later decide its course of action.