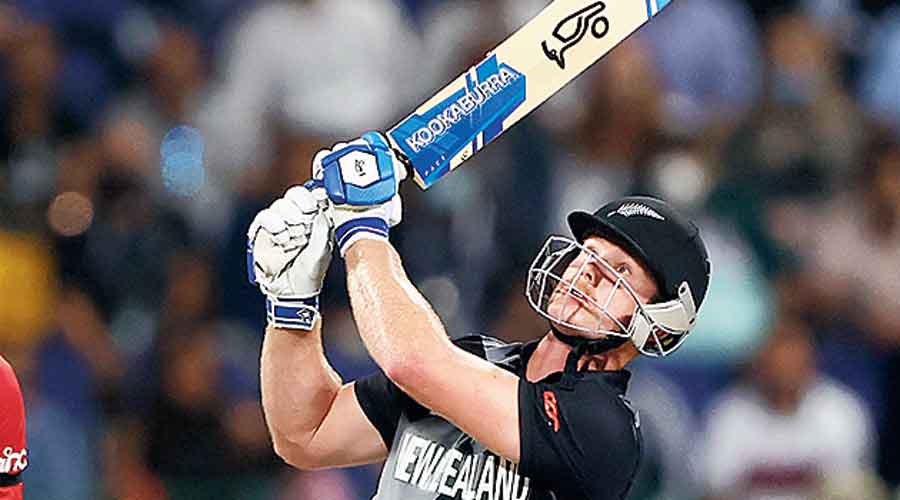 Daryl Mitchell, the name the cricketing fraternity will not forget in a hurry.

Showing tremendous temperament in overcoming his struggle during the middle overs, the opener went on to play the innings of his life to hit an unbeaten 72 off just 47 balls that helped New Zealand prevail over England by five wickets in the first semi-final at the Sheikh Zayed Cricket Stadium in Abu Dhabi on Wednesday.

The outstanding knock also ensured the Black Caps buried the ghosts of that 2019 (50-over) World Cup final at Lord’s.

It seems an England-New Zealand contest, especially in the knockout stage of an ICC event, can never be short of late excitement.

Just like how New Zealand had things under control in that final two years ago, Eoin Morgan’s efficient captaincy left the Black Caps with as many as 57 required off the last four overs, chasing a tricky 167 on a two-paced surface.

But then, just as what Ben Stokes had done on July 14, 2019, Mitchell returned the favour to England with spectacular support from Jimmy Neesham (26 off 10 balls). The left-handed Neesham smashed Chris Jordan for a couple of sixes and a boundary in the game-turning 17th over that yielded New Zealand 23 and more importantly, snatched away the momentum.

Gripping the wet ball became tougher due to the dew, which Jordan and other England bowlers found out. Besides, much like the slice of luck Stokes had at Lord’s, Neesham too enjoyed a similar bit of fortune in the fourth ball of that same Jordan over.

This time, it was Jonny Bairstow who couldn’t prevent his knees from touching the boundary ropes before throwing the ball to Livingstone. Those were six priceless runs for the Black Caps, who displayed the sportsman spirit that makes them the nicest guys of world cricket.

In the very first ball of the 18th over, Mitchell, at the non-striker’s end, turned down a single after bumping into Adil Rashid. Would other teams have done the same at such a critical phase? Tough to say.

Neesham perished in that over, but his cameo was massive in terms of releasing the pressure on Mitchell.

Steely enough to be brutal on Chris Woakes, who had earlier removed Martin Guptill and skipper Kane Williamson in quick succession, Mitchell knocked over all of the required 20 runs in the penultimate over itself.