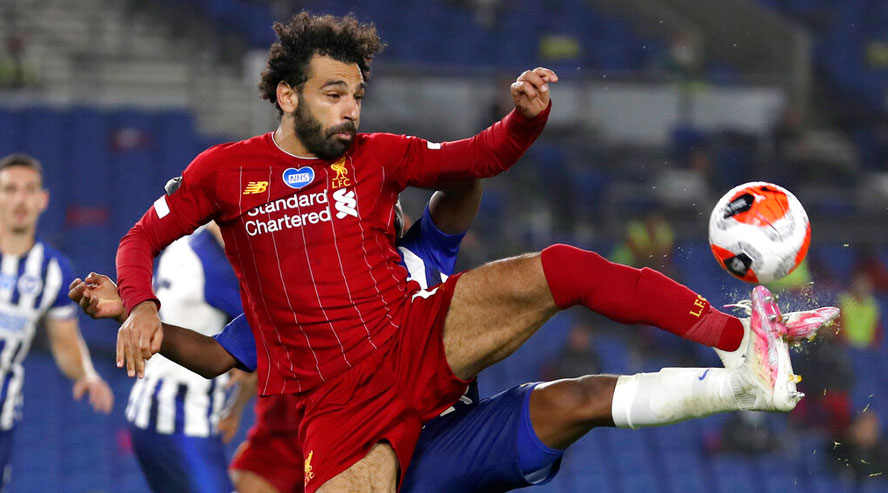 Mohamed Salah attempts to control the ball during the EPL match between Brighton and Liverpool on Wednesday.
AP
Agencies   |   Brighton   |   Published 10.07.20, 03:58 AM

Mohamed Salah scored twice as champions Liverpool moved on to 92 points with a 3-1 win at Brighton and Hove Albion in the Premier League on Wednesday.

The victory kept Liverpool on target to secure a record Premier League points tally, with Juergen Klopp’s side needing nine from their remaining four games to beat the mark set by Manchester City, who amassed 100 points in 2017-18.

Barcelona kept up their pursuit of leaders Real Madrid in the La Liga title race by beating city rivals Espanyol 1-0 at home on Wednesday, also condemning their neighbours to relegation from the top flight. Luis Suarez struck the only goal of the game. Barca are on 76 points after 35 games while Madrid are top with 77 and can restore their four-point advantage when they host Alaves on Friday.

AS Roma ended a run of three successive Serie A defeats with a 2-1 win over Parma, who were angered after having a penalty turned down on Wednesday. Parma took an earlier lead when Andreas Cornelius went down in the area, the referee awarded a penalty after consulting the pitchside monitor, and Juraj Kucka converted.