Advertisement
Home / Sports / Cricket / She would spit fire even while bowling at me in nets: Mithali pays tribute to longtime teammate Jhulan Goswami

She would spit fire even while bowling at me in nets: Mithali pays tribute to longtime teammate Jhulan Goswami

'We are of the same age, so we have that comfort level and communication' 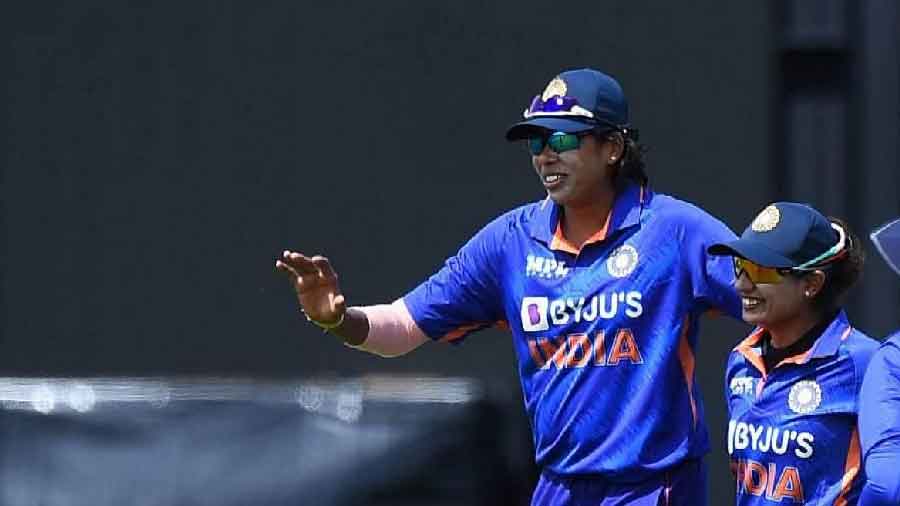 Jhulan Goswami's commitment to the game was such that she would "spit fire" even while bowling in the nets, and at the receiving end of it often was her longtime teammate and captain, Mithali Raj.

India's finest ever batter Mithali, who called time on a glorious career in July, on Saturday welcomed her contemporary and fast-bowling great Jhulan into the former cricketers' club.

Having shared the dressing room for close to two decades, Mithali and Jhulan saw the massive growth of women's cricket in India, shared many memorable wins and also some heartbreaking losses.

Speaking to PTI on Jhulan's immense impact, longevity and relentless hardwork over the years, Mithali began by talking about the 'Chakdaha Express'' early days when she came into the Indian team as a 19-year-old.

"We are of the same age, so we have that comfort level and communication. It was always very easy to reach out to her and speak to her. Someone who was always high on energy on the ground, may be because she is a fast bowler," said Mithali.

The 39-year-old became the leading wicket-taker in ODIs through sheer dedication. Though swing was not her biggest weapon, accuracy and use of the seam got her a bagful of wickets.

The competitive spirit in Jhulan was very much evident even in the nets, recalled Mithali.

"In the nets, I would often ask her 'why are you spitting fire, you are my teammate only na'. Then she would say 'to get out is the toughest'. She always had the competitive streak including domestic cricket where we played against each other often. I enjoyed that rivalry as well."

A fast bowler is expected to have a tough exterior but Jhulan was also gentle at heart. Mithali recollected a game in domestic cricket that revealed Jhulan's softer side.

"We were playing in the semifinals (Railways versus Bengal). I did not carry my helmet during that domestic season. Jhulan was aiming right at my head and I did leave a lot of her bouncers.

"After a while she came up to me and said 'why are you not wearing a helmet? I was like 'I did not carry helmet', how will I wear one?' Those were the fun times."

The former India captain said even the opposition would give her due respect, especially when she was at her peak.

"What her stood out was her accuracy. She was not much of a swing bowler, she was more of a bowler who would get the ball in and out. The cutters were her strength. At her peak, she would hardly give loose balls."

After the retirement of pacers Rumeli Dhar and Amita Sharma, Jhulan was the constant in India's pace attack, even as the team relied heavily on spin.

"She was a lone ranger from one end for a very long time. She would get support at times but often she would be the only one trying to put pressure. That holds true even in the recent times."

Both Mithali and Jhulan started playing at a time when women's cricket was a neglected sport. It finally came under the BCCI's umbrella in 2006.

"We had a lot of fun probably early in our careers though she was more at the receiving end of my pranks. As we got older and matured, we saw many of our teammates leave the game and both of us were left among a bunch of new faces.

"Having her in the team helped because she was also that person who would speak to everybody and communicate. Whenever I needed an opinion she would always give one."

Mithali also fondly remembers their partnerships in the middle.

"I enjoyed batting with her as well and I always thought she could contribute a lot more with the bat.

"There were some good partnerships, some amazing wins, some bad losses, we have seen it all through. It is a sad moment (that she is retiring) but also a moment to celebrate someone who played for such along time. It is not easy to have a career like that as fast bowler."

Talking about Jhulan's interests off the field, Mithali came up with interesting revelations.

"She enjoys reading about politics, wants to know what is happening in the world. Her knowledge of men's cricket also stands out. I would always tell her if I was ever on the hot seat (KBC) and a cricketing question came, she would be the first person I would call."

Cup slip haunts Jhulan, but she lived her dream