It is the season of political disruptions in Pakistan 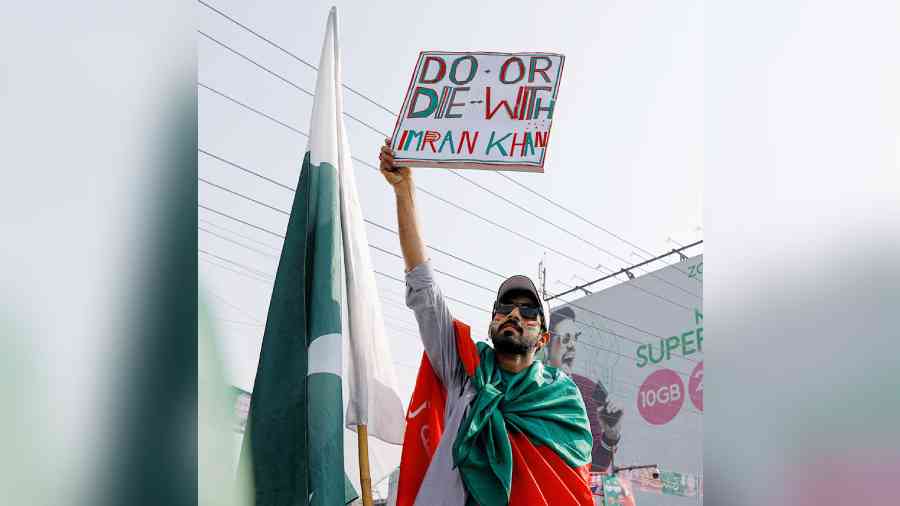 The year, 2022, has been a tumultuous one for politics in Pakistan in many ways. Ever since the successful vote of no-confidence against Imran Khan and the formation of a coalition government led by the prime minister, Shehbaz Sharif, not a single day has gone by without something ‘new’ coming our way. First came Khan’s false narrative of a ‘foreign conspiracy’ to oust him that was not only debunked officially several times but an alleged audio leak also confirmed what many had been saying — that the Pakistan Tehreek-e-Insaf decided to ‘play’ with the cipher from the United States of America and build a narrative around it once it was imminent that Khan wouldn’t survive the vote of no-confidence. The new coalition government did not know how to counter Khan’s narrative and seemed on the defensive most of the time. Add to this rising inflation, the compulsion to meet the pre-conditions set by the International Monetary Fund because of the previous PTI government’s commitments, forming and then losing the Punjab government in a matter of months, losing the by-elections in Punjab — Pakistan’s coalition government has been in a lot of trouble.

Khan seems to be winning the narrative war. The people have forgotten about his government’s economic mismanagement as well as his misgovernance during the last three and a half years. Khan’s popularity has grown manifold and has now reached its peak. His party has won most of the by-elections that have taken place after the vote of no-confidence. He wants early elections and is now marching from Lahore towards Islamabad. Khan’s long march is expected to reach the federal capital in a few days. But the government has raised some concerns regarding the long march after the PTI leader, Faisal Vawda, said there would be bloodshed during the long march. Vawda addressed a press conference last week, days after the brutal killing of the journalist, Arshad Sharif, in Kenya on October 23. Vawda alleged that Arshad’s murder was planned and plotted in Pakistan. He also alleged that there will be bloodshed in PTI’s long march. Vawda’s basic membership was terminated by the PTI following his press conference after a show-cause notice was issued to him.

A day after Vawda’s press conference, another — rather unprecedented — press conference took place. The DG ISPR held a joint press conference with the DG ISI, lieutenant-general Nadeem Anjum. This was the first time that the head of Pakistan’s spy agency had addressed the media publicly. The press conference was about Arshad Sharif’s murder investigation as well as about Imran Khan. It was revealed that Khan had offered to give the chief of the army staff, General Qamar Javed Bajwa, an indefinite extension before the vote of no-confidence to save his government, but his offer was rejected. The DG ISI said that he had to come forth and set the record straight because many lies were being spread about his institution. He also said that the military had decided to remain apolitical and would only play its constitutional role. The press conference was seen as a direct response to Khan’s narrative against the ‘neutrals’ (in other words, the Establishment). The PTI leadership was quick to respond to the press conference. In his speeches and interviews since then, Khan has maintained that the context of many things that were said was not mentioned but he wouldn’t want to go into details. Many have seen the recent press conference as a warning shot to Khan and his aggressive narrative.

The government is now coming down hard on how to deal with Khan’s long march following the press conference. Some political observers say that the government is more confident now because it is clear that Khan does not have the backing of the current Establishment unlike his 126-day dharna  (sit-in) back in 2014. Eight years ago, when Khan embarked on his long march in August 2014, it was all but clear who supported him. Many believe that the 2014 dharna was a political disruption and had affected Pakistan’s society, media and politics in ways never seen before. For 126 days, Khan’s speeches were shown live on television screens. Live transmissions took place every day to discuss what he had said. Khan made baseless allegations against all and sundry. The language used by him against his opponents shaped young minds as well. It also put the media on the defensive and the then Pakistan Muslim League (Nawaz) government on the backfoot. The political chaos and uncertainty that followed were not because of an organic mass movement but a manufactured one. It is because of the 2014 dharna that the current government has decided to be unapologetic about a crackdown on peaceful protesters in the long march. Several PML(N) leaders have admitted privately to political observers that permitting the 2014 dharna had benefitted Khan.

Fast-forward to 2022. Khan has maintained that his march towards the capital will be peaceful but the government believes otherwise. In a tweet about the success of the long march, Khan wrote: “For 6 months I have been witnessing a revolution taking over the country. Only question is will it be a soft one through the ballot box or a destructive one through bloodshed?”

Khan has been demanding early elections. The government is now insistent that it will hold the elections in 2023 after completing its constitutional tenure. Everyone is waiting to see who will blink first: Khan or the government. But the question remains that if the government does not announce early elections even after the long march reaches Islamabad, then what? If there is any violence, it does not benefit either of the two sides. In fact, it will be detrimental to Pakistan’s democratic setup. It is important for all sides to pause and then find a middle way. There can be no way forward without talking to each other. Pakistan cannot afford any more disruptions. Let’s hope we see an end to this continuing political chaos.