What does it say about Indians that a significantly lighter pocket worries them more than the risk to life and limb? 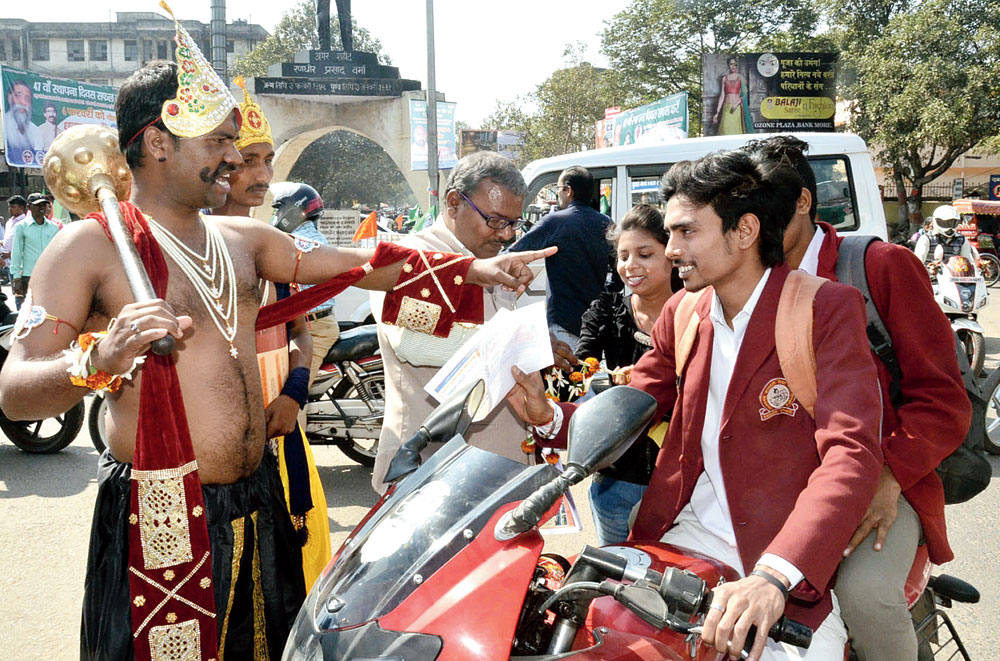 Youths dressed as Yamraj and Chitragupta warn bikers about the dangers of riding without a helmet at Randhir Verma Chowk in Dhanbad. India accounts for 5 lakh road accidents annually — the figure is among the highest in the world — in which 1.5 lakh people die and 3 lakh are crippled.
Picture by Gautam Dey
The Editorial Board   |   Published 10.09.19, 07:38 PM

Rules are made to be broken. This is a maxim that unites Indians cutting across the barriers of religion, caste, class and gender. This could explain the collective outrage over the steep fines prescribed in the Motor Vehicles (Amendment) Act, 2019, which came into effect this month. What seems to have eluded the protesters is that the question of paying a steep fine arises only when regulations are flouted. While defending this legislation’s thrust on penalties, the Union minister of transport, Nitin Gadkari, claimed that striking fear in the hearts of citizens is the only way to make them toe the line. What does it say about Indians that a significantly lighter pocket worries them more than the risk to life and limb? There is, as it has been argued by the minister, a case for imposing hefty penalties. India accounts for 5 lakh road accidents annually — the figure is among the highest in the world — in which 1.5 lakh people die and 3 lakh are crippled. A majority of these accidents could have been avoided by following traffic rules. But discipline, it appears, is anathema to the Indian sensibility. In fact, Mr Gadkari may have underestimated how far Indians can go to circumvent the law. Already, citizens seem to have devised ingenious ways of avoiding fines: helmet-less bikers walking beside their two-wheelers instead of riding them on sighting a cop is just one example of such enterprise. Fines are thus not enough to bring the errant Indian back on the right track. Worse, two international studies show that penalties that are too stringent are either not enforced or lead to more bribery, especially among the keepers of the law. Top-down edicts, such as those from an elected government, are unlikely to have a positive effect either; this was proven by the widespread failure on the part of Indians to comply with a Supreme Court order banning firecrackers during Diwali last year.

Is civic sense, then, a lost cause in the country? Perhaps not. Two cities in Andhra Pradesh have shown the way. In Guntur, law breakers were given the responsibility of upholding the law by assisting the traffic police, while in Hyderabad offenders were made to stand in public places holding placards with messages on awareness. Significantly, in both instances, the number of traffic violations went down for some time after the implementation of these imaginative interventions. There may then be a case to make the people, especially transgressors, direct stakeholders in maintaining law and order instead of expecting them to fall in line for fear of fines. This might also help instil in the Indian mind a dose of civic sense. Mandatory community service, something that the courts have prioritized quite often, could be one way of making the recalcitrant Indian obey, in a manner of speaking, the lights on the road.