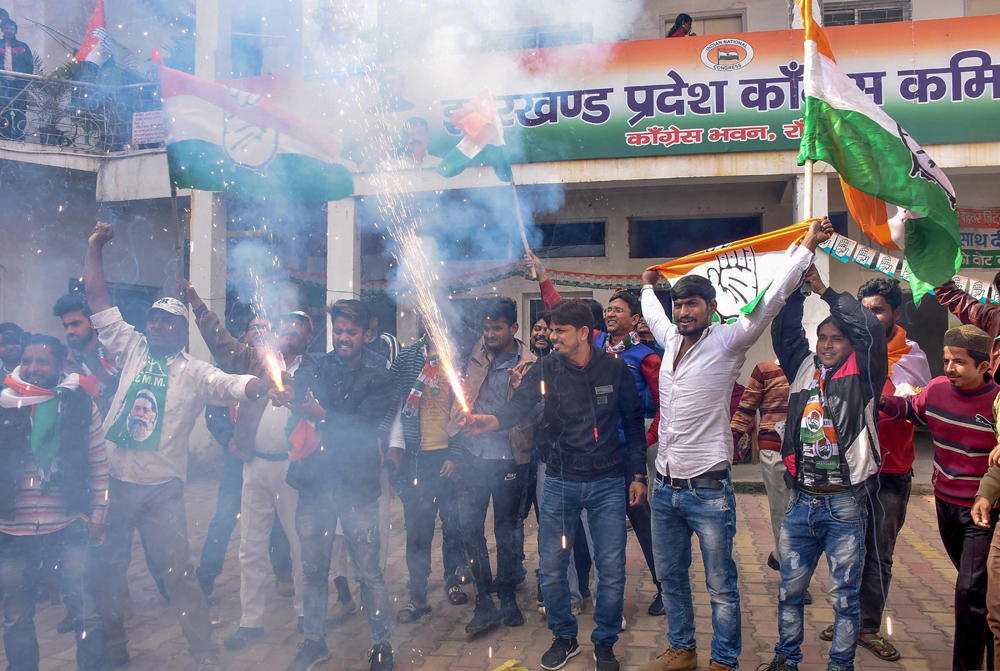 Seven months is a long time in politics. In May, the Bharatiya Janata Party had swept Jharkhand along with the rest of India, winning 12 of the 14 parliamentary seats in that state. Now — only seven months later — the BJP has been booted out of Jharkhand. The party managed to win 25 of the 81 seats, while a coalition comprising the Jharkhand Mukti Morcha, the Congress and the Rashtriya Janata Dal, having pocketed 47 constituencies, appears set to form the government. The victory is likely to energize the parties in the Opposition; they would be hoping that Bihar and Delhi, which would go to polls later, will also vote Jharkhand’s way. The BJP, on the other hand, has reasons to be concerned: Jharkhand is the fifth state to have slipped out of its grip. A cocktail of reasons is being cited for the BJP’s ouster in Jharkhand. Raghubar Das, the former chief minister who suffered defeat, turned out to be an electoral liability; the BJP’s split with the All Jharkhand Students Union cost Mr Das and his party substantially, especially in seats with sizeable tribal voters. But the decisive factor seems to be the electorate’s disenchantment with ‘national’ issues. It must be mentioned that during their campaigns in Jharkhand, both Narendra Modi and Amit Shah chose to focus on such ‘achievements’ as the Centre’s abrogation of Article 370 in Kashmir as well as the imminence of the contentious National Register of Citizens. The Opposition, meanwhile, kept its ear to the ground, speaking of the BJP’s pathetic failure to provide jobs, check lynchings or resolve the controversy surrounding the amendments to land tenancy, a sensitive issue in the tribal belt. The verdict seems to confirm an old rule in Indian politics; local issues play a pivotal role in determining the outcomes for the Vidhan Sabhas.

The BJP is confident that Mr Modi’s popularity, which has won the party two Lok Sabha elections, remains undiminished. The reversals in several states, the party is certain, are unlikely to adversely affect its fate at the Centre. This smugness is the result of the impotency of the Opposition. India’s streets are on fire, with thousands of citizens protesting against the divisive policies instituted by Mr Modi’s government. Yet, the Opposition lacks a leader who can capitalize on this momentum. A seamless integration of local issues with those that will determine the direction of the nation is necessary for the Opposition to unseat the BJP from its perch in Delhi.