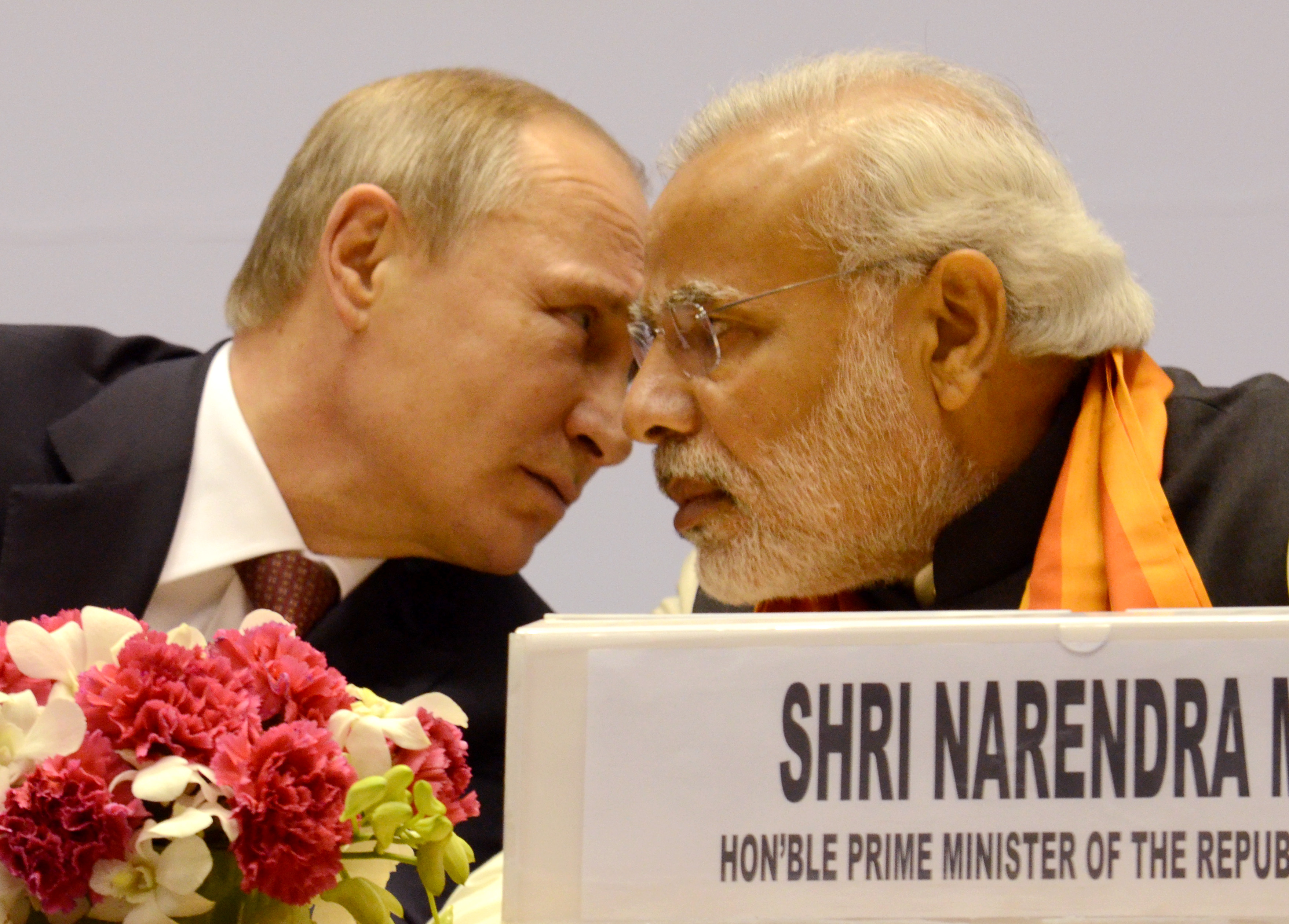 When Russian President Vladimir Putin and Prime Minister Narendra Modi stand together at Hyderabad House in New Delhi on Friday afternoon to witness the signing of several bilateral agreements, the elephant in the room will be Pakistan. In an atmosphere of bonhomie, partly contrived out of necessity on both sides, but mostly genuine, nobody will talk about this unpleasant elephantine presence.

If Putin and his chain-smoking, hard-drinking foreign minister Sergei Lavrov had not conspiratorially been moving their pawns and bishops on the South Asian chessboard for several months now, Russia’s controversial S-400 missile deal with India would not have got this far. It is not for nothing that top diplomats in American President Barack Obama’s administration, after having been repeatedly frustrated by Lavrov, described the foreign minister as “deviously brilliant”.

Putin’s final move in the S-400 chess game, which forced India into developing a spine to stand up to Washington’s anti-Moscow Countering America’s Adversaries Through Sanctions Act, came in the last week of August and made the Prime Minister’s Office in New Delhi sit up. On August 26, Russia’s advanced hi-tech defence manufacturing conglomerate, RTI, signed a memorandum of co-operation to supply radar systems to Pakistan specifically to protect a nuclear power plant in Karachi against any attack.

“A memorandum in the field of organising the delivery of the civilian radar Surok was signed at the Army-2018 International Military and Technical Forum between RTI Group and the Pakistani company TechWin Enterprise,” the announcement in Moscow said. “The radar is set to control and protect the Karachi NPP’s (nuclear power plant) facilities, and also some other installations of Pakistan’s critically important infrastructure.”

For the first time, Pakistan will be protected by Russian equipment against any hypothetical attack on its nuclear installations launched by India. Oddly, no one in India – in the media, in the strategic community or in government briefings – has discussed this deal which has been in Russia’s public domain for over a month. In Moscow, however, the deal is integral to analysing South Asia now.

In typical Kremlin-style, no third country is mentioned in any discussions in Moscow on the proposed sale to Pakistan. There is no need really. Who else but India might launch a missile attack on a Pakistani nuclear installation, to counter which it needs sophisticated radar cover? Not Maldives? Not Bangladesh? Significantly, the RTI announcement hints at protecting “also some other installations of Pakistan’s critically important infrastructure” without specifying any details. This suggests the announcement is only the tip of an iceberg.

The Army International Military and Technical Forum is an annual exhibition and conference organised by the Russian ministry of defence to demonstrate their country’s military equipment capabilities. This year, it was attended by military delegations from 65 countries, 20 of which were led by their defence ministers. The Kremlin intended the radar deal to convey to New Delhi that the US may put pressure on Islamabad to change its ways, but Pakistan has options which can neutralise India if diplomatic and security frameworks in South Asia that are decades old were rearranged or disrupted.

As India came under intense US pressure in the summer months to abandon Russian defence purchases to comply with CAATSA, the “Valdai Discussion Club,” a think-tank directly patronised by President Putin, became the stage for conveying collateral messages to India. At the beginning of August, this think-tank, named after Lake Valdai, on whose banks its first meeting in Putin’s presence was held in 2004, invited General Zubair Mahmood Hayat, the chairman of Pakistan’s Joint Chief of Staff Committee, to explore the theme of “Russia and Pakistan: Partnership for Strategic Stability.”

According to an official account of the meeting, “it was noted during the discussion that Pakistan will not tolerate hegemony of any country in the region and believes that the notions of counterweight and containment are dangerous.” A few days before General Hayat addressed the Valdai Club, Russia’s deputy defence minister Alexander Fomin travelled to Islamabad and together with Pakistan’s military-political leadership, convened the first ever session of the Russia-Pakistan Military Consultative Committee on Defense and Security Issues.

A far-reaching outcome of this Consultative Committee meeting was a framework agreement on admitting Pakistan’s army officers for study and training in Russian military colleges and training institutions. It was similar to the arrangement with the Americans, which began during Ayub Khan’s presidency that endured as a pillar of camaraderie between the military establishments in Rawalpindi and hallowed US military service academies such as West Point.

The Russian defence ministry later said of the agreement: “A reliable regulatory framework was formed, which enables to organise full-scale education of Pakistani servicemen in Russian military educational institutions.”

Russia is already in talks for energy cooperation with Pakistan. The vagueness about such cooperation and the deliberate low-key nature of these talks have led to speculation that Russia reserves the option to offer Pakistan a nuclear deal which the Americans have so far withheld from Islamabad. When foreign secretary Vijay Gokhale visited Moscow in the last week of August, the radar deal with Pakistan was withheld from him because the Russians wanted the formal announcement a few days later to set the cat among New Delhi’s pigeons.

Putin’s chess moves, which have taken forward the S-400 missile deal in the face of strident American objections, are tactical and make little difference to the substance of Indo-Russian ties.

What is different is that strategically, the Russians now see Pakistan as a partner in fighting terrorism and have moved away from Indian prescriptions in this regard which they once shared, whatever lip service they may pay in any joint statement, if at all. “We have confirmed Russia’s readiness to continue boosting Pakistan’s counterterrorism capacity, which is in the entire region’s interests,” foreign minister Sergei Lavrov said recently after bilateral meetings.