It would help people differentiate between truth and lies. Otherwise these accusations would continue indefinitely 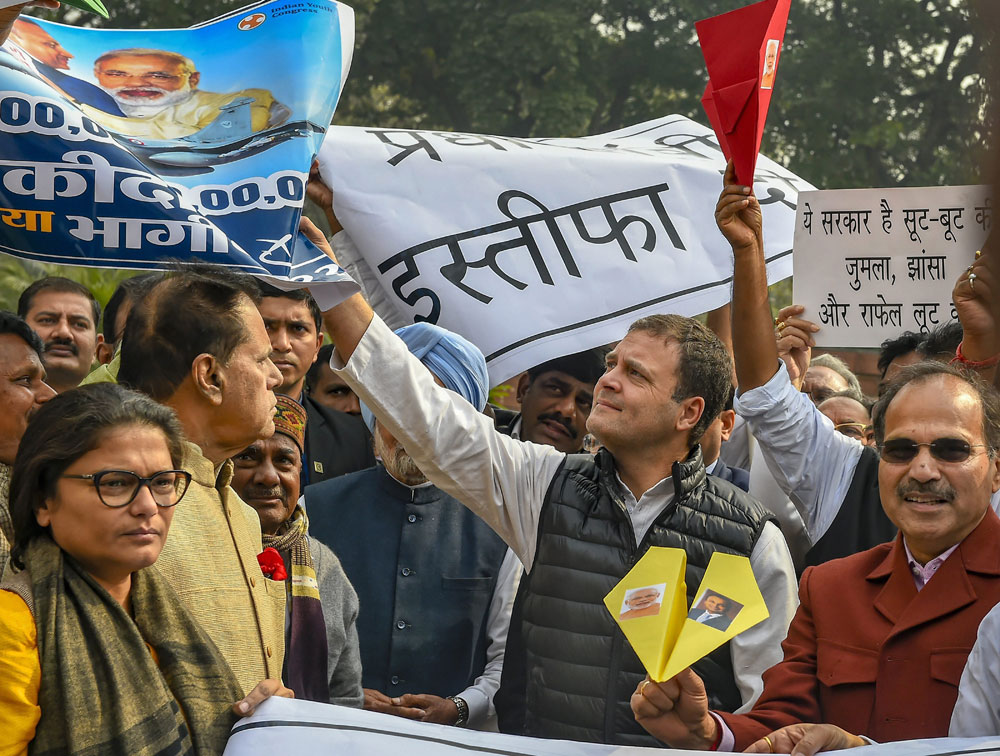 Congress President Rahul Gandhi with party leaders during a protest over the Rafale deal in the Parliament House complex in New Delhi on Wednesday, February 13
(PTI)
The Telegraph   |     |   Published 18.02.19, 11:23 AM

Sir — The Congress president, Rahul Gandhi, raised the Rafale controversy and challenged the prime minister, Narendra Modi, to a debate on the matter (“From ‘chor’ to ‘coward’”, Feb 8). The Rafale deal has been a burning issue for both the ruling party and the Opposition. The ruling Bharatiya Janata Party issues clarifications while the Opposition accuses Modi of committing irregularities in the deal. Modi should agree to a debate with Rahul Gandhi and answer questions over the agreement. The discussion would help the people differentiate between the truth and the lies. Otherwise these accusations would continue indefinitely.

Sir — Rahul Gandhi has challenged Narendra Modi to a debate. But this kind of a debate is inevitably one-sided. It lacks the nuances of, say, the verbal duel between the two contenders that is aired before the presidential elections in the United States of America.

Rahul Gandhi lacks his father’s suaveness. He has only learnt to be critical of the prime minister. Such an attitude is unlikely to be endorsed by large segments of voters.

Priyanka Gandhi’s induction into the Congress, however, bodes well for the party. If the Congress does go on to win the next general election, will we see a change in Rahul Gandhi’s attitude?

Sir — It appears that Narendra Modi is the first prime minister who does not like to face the media or participate in debates. Modi may have many qualities, but it is of no use to remain distant from the people. Modi should debate Rahul Gandhi and remove doubts cast on the Rafale deal.

Sir — It was heartening to read that Vidarbha succeeded in defending their Ranji Trophy title (“Vidarbha retain Ranji Trophy”, Feb 8). In the process, Vidarbha became only the sixth team in the history of the championship to achieve the feat of winning back-to-back titles. Players like Wasim Jaffer and Akshay Wadkar have contributed handsomely with the willow. Together, they amassed nearly 1,800 runs — a commendable feat. In the final against Saurashtra, the left-arm spinner, Aditya Sarwate, took 11 wickets, including the prized scalp of Cheteshwar Pujara. He was correctly adjudged the Man of the Match.

Vidarbha’s mentor, Chandrakant Pandit, has managed to inculcate a sense of discipline in his players. This has been the key to Vidarbha’s success. This victory will definitely encourage youngsters from this region to take cricket seriously. Perhaps we will have more players of the calibre of Umesh Yadav, who has achieved considerable success in the international arena.

Sir — After their victory last year, Vidarbha’s coach, Chandrakant Pandit, must have urged his boys to walk the extra mile. This motivation may have helped Vidarbha win their second Ranji Trophy in successive years. Vidarbha’s left-arm spinner, Aditya Sarwate, proved to be the difference between the two sides in the final. He dismissed Cheteshwar Pujara not once but in both innings.

Sir — Vidarbha’s triumph in the Ranji Trophy must be welcomed by cricket lovers in India. The triumph proves two important things. First, it appears that Ranji Trophy, India’s premier domestic competition, has become far more competitive. The big boys, Delhi and Mumbai, can no longer take their success for granted.

Second, an open competition is emblematic of the democratization of the game in the country. Nowadays, smaller states are willing to put up a tougher fight. This can only mean that the Board of Control for Cricket in India’s policy to harvest talent across India is bearing fruit. 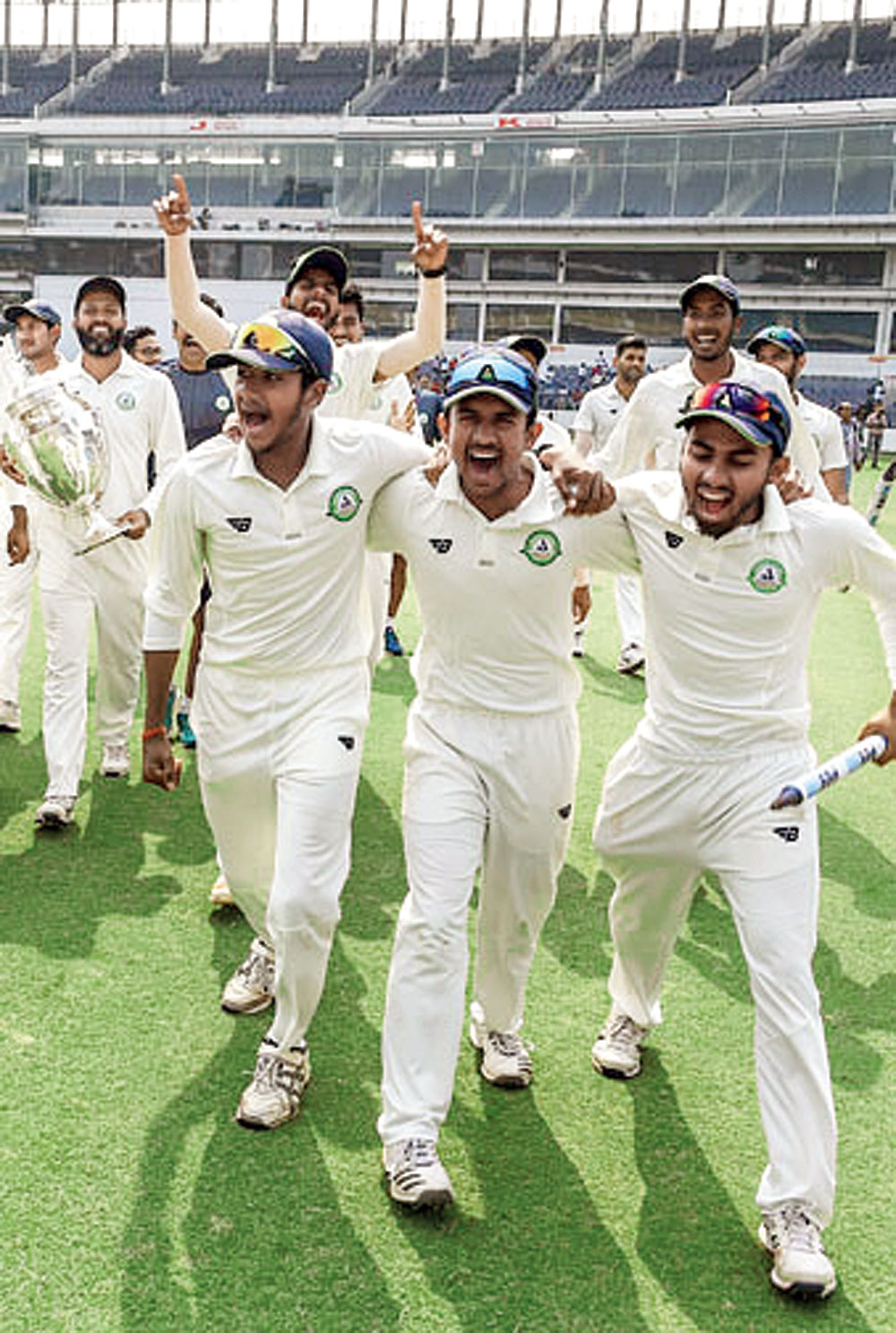 A force to reckon with: Defendng champions Vidarbha won the 85th Ranji Trophy title, beating Saurashtra by 78 runs in the summit clash
(PTI)

Sir — Sukumar Ray may have been wrong. It appears that ears, and not the moustache, are far more reliable when it comes to identifying humans. Research has now shown that ears, unlike other organs, are stable structures and do not undergo radical transformations. These findings have even led to the creation of ear-detection software, which, after being linked to CCTV, can come in handy to detect criminals. Parents and teachers in India have always known about the durability of the human ear. They love boxing the ears of children and wards, secure in the knowledge of the invincibility of the pair.

Sir — It is a matter of concern that the number of swine flu cases are on the rise in India. Rajasthan, Gujarat, Punjab, apart from Calcutta, have been adversely affected. Unfortunately, the authorities do not seem to be doing enough to check the spread of the contagion. As a result, the affliction continues to spread across the country. Should not the governments at the Centre and in the states undertake urgent measures to eradicate swine flu at the earliest?