Body and mind remain sites of contestation in women’s sports 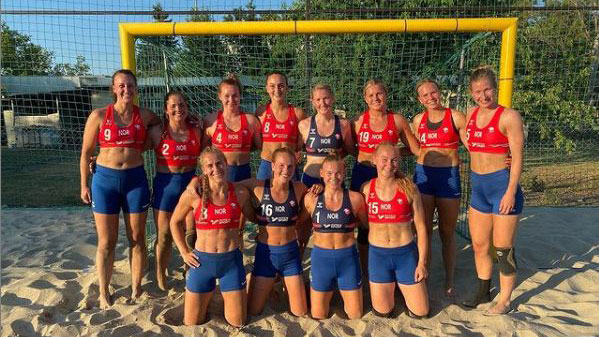 The Norwegian women’s beach handball team has been locked in a battle with the sport’s governing bodies to wear less-revealing uniforms for some time now.
Instagram/norwaybeachhandballwomen
The Editorial Board   |   Published 31.07.21, 01:14 AM

The wisdom of the adage, “Mens sana in corpore sano”, can be understood as the need for the mind and the body to be conjoined, figuratively speaking, as a healthy unit. It may be the twenty-first year of the twenty-first century but the unhealthy practice of the policing of the bodies and minds of women, including athletes, continues to thrive. The Norwegian women’s beach handball team has been locked in a battle with the sport’s governing bodies to wear less-revealing uniforms for some time now. After repeated complaints about the mandatory bikini bottoms were reportedly ignored by the administration, the team wore shorts — the standard outfit when it comes to the men’s team — during a recent game in protest. They were fined 150 euros per player for this ‘transgression’. Ironically, puritanism can also lead to reverse shaming. For instance, the ace tennis player, Serena Williams, has often faced criticism for her ‘revealing’ outfits.

These contradictory pulls and pressures of a dated morality reveal the strange intersections of — a tussle between? — the male gaze and morality. The manifestation, inevitably, is the institutional regulation of women’s sartorial choices. In 2012, the Badminton World Federation tried to force female players to wear skirts in order for them to “look feminine and have a nice presentation”. This camouflaging of the male gaze — it is perhaps most discernible in fields like cinema and sports that put the spotlight on women’s bodies — in an aesthetic argument reeks of hypocrisy. Cutting the cloth either way makes little sense when it comes to women: whether they are asked to reveal or cover skin, the visibility of their bodies renders their skills — the ideal criterion of sporting performance — invisible. Female athletes, hearteningly, are pushing back in a bid to sensitize sporting federations into acknowledging the agency and autonomy of women players. In the ongoing Tokyo Olympics, German gymnasts decided to take a stand against the sexualization of their bodies by donning full-body suits. More such ‘transgressions’ would be welcome, but are they enough to set right the distorted priorities? Ensuring a gender representative turf would require an assault on entrenched sexism at multiple levels. This should include addressing a whole range of anomalies, from discriminatory pay scales between men and women players — the top two female tennis players together earned around $30 million less than the highest-paid male tennis player — to enforced dress codes and the unapologetic objectification of the body by mass culture.

That still leaves the scars of the mind. The pressure — coercion — to adhere to the codes of sexism puts women performers under unprecedented psychological stress. There is not only expectation to excel but also excel while ticking the boxes of allurement, consumption and vicarious gratification — each element being integral to the fate of women’s sport being a profitable enterprise. Is it any wonder then that Simone Biles withdrew from the Olympics and Naomi Osaka from the Roland-Garros and the Wimbledon? These courageous decisions — putting body and mind over all else — only go to show that both these spheres remain sites of larger contestations.