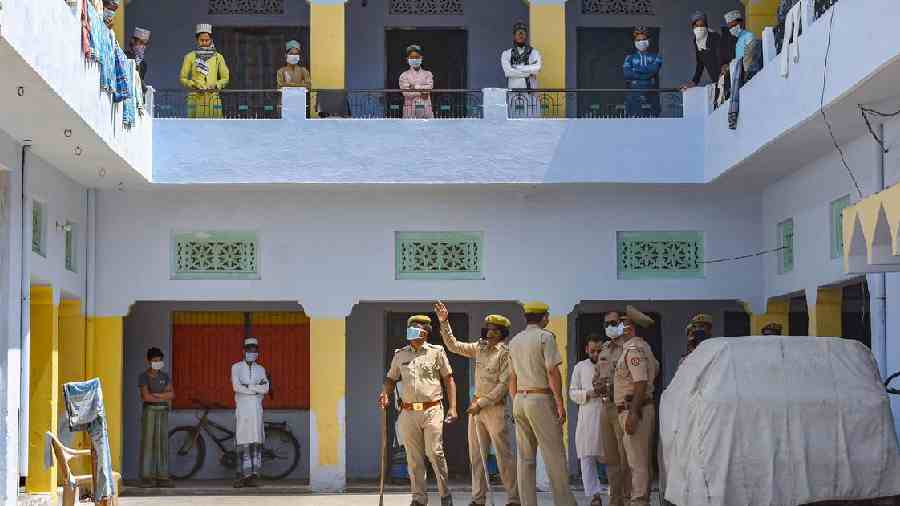 In India, slander against and vilification of Muslims during the Covid surge was common: Sikhs in Afghanistan and Shia Hazaras in Pakistan bore the brunt of similar attacks.
PTI file picture
The Editorial Board   |   Published 06.12.22, 04:24 AM

The Narendra Modi government has often been criticised for India’s poor performance on indexes that measure a wide range of phenomena —  hunger, press freedom and so on. The Centre has now reasons to gloat that India has claimed pole position in at least one such register. A study by the Washington-based Pew Research Center has found that India has topped the Social Hostilities Index involving religion. Of the 198 nations that were assessed, India found itself, along with Mali, Somalia, Pakistan, Iraq, Libya, Afghanistan and so on, among 11 nations with scores of 7.2 or higher: none of the other countries in this list, arguably, can stake a claim on a democratic and pluralist heritage that marked Old India. The rise in India’s score, the report stated, could be attributed not only to the violence witnessed against Muslims during the protests against the divisive Citizenship (Amendment) Act but also to pandemic-related hostilities perpetrated on minorities. In India, slander against and vilification of Muslims during the Covid surge was common: Sikhs in Afghanistan and Shia Hazaras in Pakistan bore the brunt of similar attacks. What is shameful and worrying for India and Indians who believe in the nation’s multi-religious character is evidence of the institutionalisation of such bigotry. Private actors — the media’s role must not be undermined — were instrumental in the dissemination of the poison: the toxic campaign against the Tablighi Jamaat meeting, highlighted by the report, was but one example. That an unprecedented crisis in public health could be weaponised to bolster majoritarianism speaks of tectonic shifts in India’s body politic that are deeper and fundamental. Worse, the deterioration continues, as is evident from the recent plea for protection from the authorities from Karnataka’s Christians in the month of Christmas.

The findings by the Pew Research Center are not novel. The US Commission on International Religious Freedom has been warning of rising communal strife for a while. The stock response to these criticisms on the part of Mr Modi’s government has been denial and derision. But as the ruling Bharatiya Janata Party’s campaign in the Gujarat polls showed, polarisation, international censor notwithstanding, is unlikely to exit India’s social and political spheres. It is up to the people and the Opposition to reject a politics that feeds on social hostilities. But neither constituency seems to be able to succeed on this count.