The shadow of the Cuban missile crisis on Ukraine 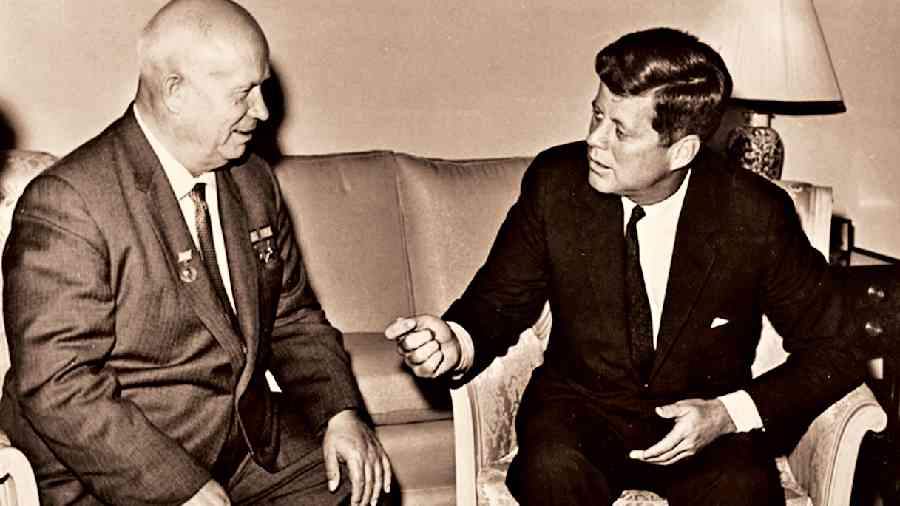 As the war in Ukraine stretches into the eighth month, no clear end appears visible and the imponderables preponderate amidst an incremental, but perceptible, escalation. Controversial referendums, the Russian declaration of formal annexation of a chunk of Ukrainian territory, and the announcement of a partial mobilisation of its military reserve amidst what are clearly battlefield reversals of the Russian forces are in the news. The quality and the intensity of Ukrainian resistance are major contributory factors in the fog of war that Russia has had to confront since February this year.

Western analysts almost unanimously see President Vladimir Putin as someone who is embattled and groping in the dark.  His language and postures are interpreted as suggesting willingness to escalate to the nuclear weapon dimension. Historical parallels for Putin’s motivation in the current conflict are being hunted both deep in Tsarist history as equally in the more recent policies of the former Soviet Union. His rationales are largely understood in terms of how he situates himself in the longer span of Russian history.

Most Western commentary reads this crisis as a replay of an older script — that of Absolutism versus  Democracy. In Russia, on the other hand, it is the West that is seen as the real contesting party rather than Ukraine and the contest is also framed in larger ideological terms. The substantive point is that there is not even a remotely workable proposal in sight to end or even reduce the intensity of the present conflict. All sides are, in effect, also trapped by the respective vocabularies and analyses they employ. To us on the outside, these are narcissisms that mirror and ricochet off one another.

This fresh intensity to the conflict in Ukraine coincides with the 60th anniversary of what was possibly the closest point great power relations had come to breaking down in the post-World War II period. In October 1962, the discovery of nuclear missiles in Cuba by the United States of America initiated the crisis and it ended with the Soviets agreeing to withdraw them. In popular narratives, the entire high-tension-filled drama was compressed into a 13-day period in the second half of October 1962 till the final resolution of the stand-off.

At the time, the outcome was successfully spun by the US as President John F. Kennedy having successfully stared down his Soviet counterpart, Nikita Khrushchev, and thus checkmated an unnecessary and provocative Soviet move in the US periphery. A more nuanced picture that took into account the Cuban and Soviet perspectives appeared only gradually. A little over a year before the discovery of the missiles, a US-sponsored military invasion of Cuba had been defeated by the Cubans. This was the Bay of Pigs covert operation of April 1961 to bring about regime change in Cuba and reverse the revolution of 1958 which had brought Castro to power. The US threat to Cuba was real. For the Soviets, defending their Cuban ally was also about more than geopolitics. There was a greater sense of socialist solidarity between the two than is generally conceded. The overall context to all this was a new intensity to Cold War contestations and rhetoric exemplified by the Berlin crisis of the second half of 1961 and the erection of the Berlin wall.

Both the Cubans and the Soviets agreed that the Bay of Pigs humiliation notwithstanding, US efforts to undermine a socialist regime in Cuba would continue unless its defensive capabilities were strengthened. Cuba’s capability gap with the US was so overwhelming that the deployment of nuclear missiles was seen as the only way of effectively deterring another invasion. The additional advantage of missile deployment in Cuba for the Soviets was that it brought US territory into range. Existing US nuclear missiles in Turkey had underlined to the Soviets the need for some kind of equalizer via Cuba.

In retrospect, what stands out in the mass of historical material that emerged from the crisis is of both sides often groping in the dark about the other’s intentions, having to make decisions on the basis of errant intelligence and relying more on ingrained prejudices and predispositions. The leadership on both sides were also often unable to prevent a number of near-miss-type situations in which tactical calls could have led to an unintended escalation and a nuclear exchange.

There were many takeaways from the crisis after it was finally resolved. The installation of a hotline between the US and Soviet presidents was one — the aim being to ensure that both sides communicated directly and did not act on the basis of conjecture and supposition alone. To a considerable extent, strategic arms control and the impulse to put some caps on nuclear weapons can also be traced back to the lessons learnt by both great powers from the Cuban crisis.

Yet, perhaps most significant is the substance of the agreement reached to resolve the stand-off. The Soviet decision to withdraw the missiles was matched by a US commitment not to invade Cuba. A secret part of the agreement was also that the US would withdraw its missiles from Turkey within a timeframe. A largely hidden and underappreciated part of the story is the diplomatic heavylifting the Soviets had to do with Cuba to make it accept the agreement reached without any real consultation with it.

The larger point is that the agreement was cast in terms of geopolitical interest rather than in the normative projections of either side in the Free World vs Socialist Solidarity debate.  Seeing the crisis for what it was, shorn of rhetorical or ideological flourishes, provided the way forward. In Ukraine today, we are yet to reach that stage. Only on doing so will a mutual adjustment be possible. In the West, such an idea is still an anathema as it amounts to appeasement — a bad word in its diplomatic lexicon. And yet, moving away from epochal and ideological narratives remains the only way forward.

T.C.A Raghavan is a former High Commissioner to Pakistan and Singapore