Burba Mohan Tripura, legislator from Karbook, leaves party which has of late stepped up efforts to tone up state unit to tide over 'growing challenges' being posed by its political rivals 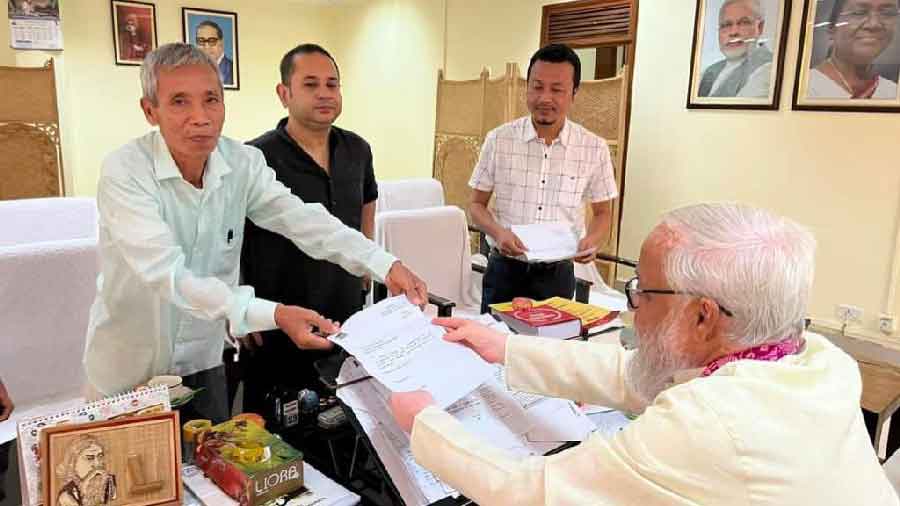 A ruling BJP MLA in Tripura resigned on Friday, taking the number of legislators resigning from the party to four in the poll-bound state.

Burba Mohan Tripura, the MLA from the Karbook Assembly constituency, also quit the party which has of late stepped up efforts to tone up the state unit to tide over  the “growing challenges” being posed by its political rivals.

The first-time MLA, 67, handed over his two-line resignation to Speaker Ratan Chakraborty in the Assembly without citing any reason for resigning.

Before Mohan, Ashis Das, Sudip Roy Barman and Ashish Kumar Saha had resigned as MLAs. Barman has since been elected to the Assembly on a Congress ticket. Saha is also with the Congress but Das is without a party after being with the Trinamul for a brief period.

Mohan is all set to join the Tipraha Indigenous Progressive Regional Alliance (TIPRA), which has emerged as a key player in the state’s tribal belt, having 20 of the 60 Assembly seats.  It has been gaining ground at the cost of the Left and IPFT, the BJP’s ally in the government, in the tribal belt.

The Speaker told the media that Mohan cited “personal reasons” for quitting while Pradyot said he did not want to work for any national party but for the tribal people of the state.

Mohan’s resignation comes a day after former chief minister Biplab Kumar Deb was elected to the Rajya Sabha polling 43 votes in a House of  59.

The BJP comprehensively won the 2018 Assembly polls with ally Indigenous People’s Front of Tripura (IPFT) but was seen hit by infighting “triggered” by Biplab Deb’s style of functioning.

Deb had to resign suddenly in May following a trip to Delhi.

Mohan’s resignation has brought down the Assembly strength to 58. The BJP now has 36 MLAs while the IPFT has seven after one of its MLA Brishaketu Debbarma was disqualified as an MLA on Tuesday for violating Assembly rules.

Debbarama had quit the IPFT a year back and has been seen with the Tipra Motha.

The BJP is circumspect over the development. Sunit Sarkar, the state

BJP media in-charge, told The Telegraph: “He was with us till yesterday. He has resigned from MLAship but the party has not received any resignation. He is addressing a media conference. Let us wait till then.”