Neso, a conglomeration of eight students’ bodies representing the seven states of the Northeast, has been opposed to the CAA even before it became a law in December 2019 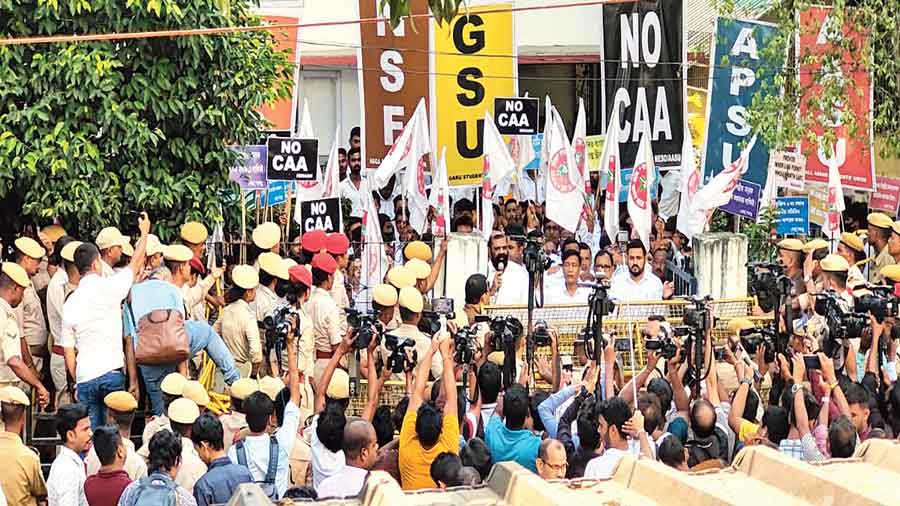 AASU members stage a protest against the CAA and other issues under the aegis of Neso at Swahid Nyas in Guwahati on Wednesday.
Umanand Jaiswal   |   Guwahati   |   Published 18.08.22, 02:14 AM

The North East Students’ Organisation (Neso) on Wednesday held a three hour protest in the seven state capitals of the region seeking, among others, the repeal of the contentious Citizenship Amendment Act (CAA), extension of the inner line permit and the update of the NRC in the entire region.

The protests in the Northeast against the CAA are different from what was witnessed at Shaheen Bagh or elsewhere in the country. Northeast organisations have been against the CAA because they fear it will open the floodgates for illegal migrants, threatening the identity, language and culture of the indigenous communities. These protests are not linked to religion. The CAA elsewhere is widely seen as “anti-Muslim” and “unconstitutional” as it makes religion the main criteria for acquiring citizenship.

Neso chairman Samuel B. Jyrwa, its secretarygeneral Sinam Prakash Singh, AASU chief adviser Samujjal Bhattacharjya and its president Dipanka Nath told The Telegraph that the CAA has to be repealed and that they will continue to protest till it is done and the inner line permit (ILP) extended to more states in the Northeast along with the update of the National Register of Citizens (NRC). Only Assam has an updated NRC but it is yet to be notified.

The ILP is a travel docu¬ment required to enter Arunachal Pradesh, Mizoram, Nagaland and Manipur. Neso wants it introduced in Assam, Tripura and Meghalaya as well to check influx.

“We want the immediate repeal of the CAA. We want the ILP and the NRC. Neso is against illegal migrants irrespective of religion. We are not against any religion but against illegal influx. The Northeast cannot be the dumping ground of illegal immigrants. We will keep protesting till our demands are met,” Singh said.

One of the triggers for Wednesday’s protest was the reported assurance by Union home minister Amit Shah recently that the CAA will be implemented, Jyrwa said.

In Guwahati, the protest was held at Swahid Nyas, the head office of AASU which had spearheaded the agitation against the CAA in 2019 when the law was passed by Parliament. The Kamrup Metro administration did not allow the influential organisation to stage a protest at Latasil, Nath said.

“We won’t accept the CAA. It has to go because it nullifies the 1985 Assam Accord. We also want the ILP shield against influx, and implementation of Clause 6 of the 1985 Assam Accord that provides legislative and administrative safeguards, as may be appropriate, to protect, preserve and promote the cultural, social, linguistic identity and heritage of the Assamese people,” Nath said.