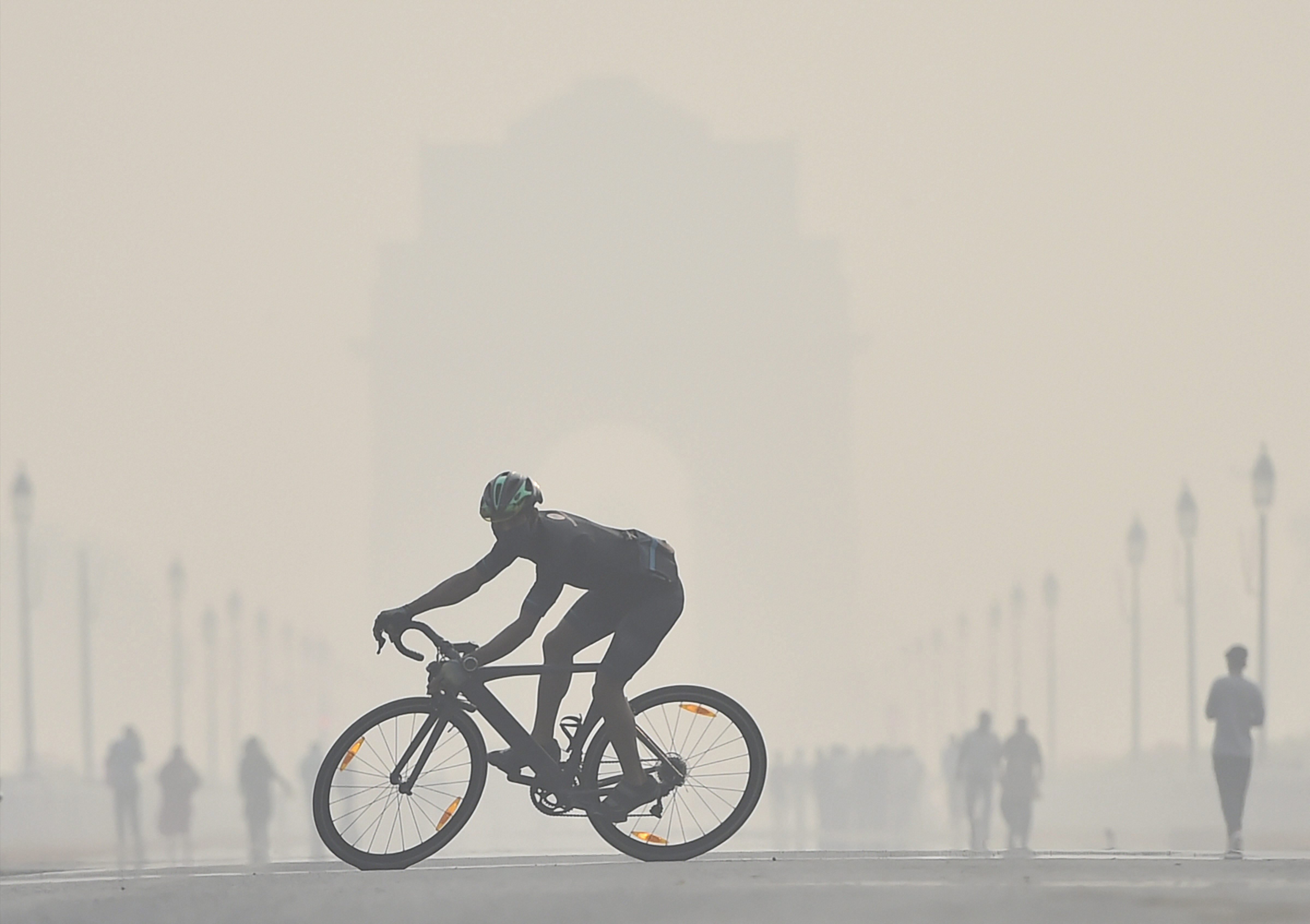 A cyclist silhouetted against a smog-covered India Gate on Thursday. The overall air quality index of Delhi has been recorded at 392, which falls in the ‘very poor’ category and is just eight points from turning severe.
PTI
PTI   |   New Delhi   |   Published 01.11.18, 10:39 AM

The Central Pollution Control Board (CPCB) on Thursday informed the Supreme Court that it has created social media accounts on Twitter and Facebook where citizens can lodge complaints about pollution in Delhi-NCR.

A bench headed by Justice Madan B Lokur directed the CPCB to give adequate publicity and issue advertisements about the setting up of these accounts so that the citizens are aware of them, and are able to lodge their complaints.

The top court also expressed displeasure that three-and-a-half years have gone by since the National Green Tribunal had, on April 7, 2015, passed an order banning plying of 15 year old petrol and 10 year old diesel vehicles in Delhi-NCR, but the directions have not been complied with yet.

The bench also noted that the top court had in May 2015 dismissed the appeal against the NGT directions prohibiting plying of such vehicles.

During the hearing, the counsel appearing for the Delhi government said that a total of 40 lakh old vehicles in Delhi had been de-registered by the authorities.

The apex court had on October 29 prohibited the plying of 15-year-old petrol and 10-year-old diesel vehicles in the National Capital Region (NCR) and directed the transport department to announce that such vehicles would be impounded if found plying.

The bench in its order had directed the CPCB to immediately create a social media account where citizens could lodge their complaints directly about pollution on which appropriate action could be taken by the authorities concerned.

The top court had described as “very critical” the prevailing situation of pollution in Delhi-NCR, directing that a list of 15-year-old petrol and 10-year-old diesel vehicles be published on the web site of CPCB and transport department.

It had permitted the court-mandated Environment Pollution Control Authority (EPCA) to take pre-emptive steps under the Graded Response Action Plan (GRAP) without strict adherence to pollution stages delineated in the plan.

GRAP is aimed at tackling air pollution in Delhi-NCR and adjoining areas and it is designed to take urgent remedial action when air quality deteriorates.

The apex court had passed these directions on a note placed before it by advocate Aparajita Singh, assisting the court as an amicus curiae in the air pollution matter, seeking urgent directions to correct the prevailing situation of pollution.

The top court is seized of matters in which several issues related to air pollution in the Delhi-NCR have been raised.

UP turns up pollution heat on districts