In his manifesto, Congress presidential candidate initially showed an erroneous map without parts of Jammu & Kashmir and Ladakh 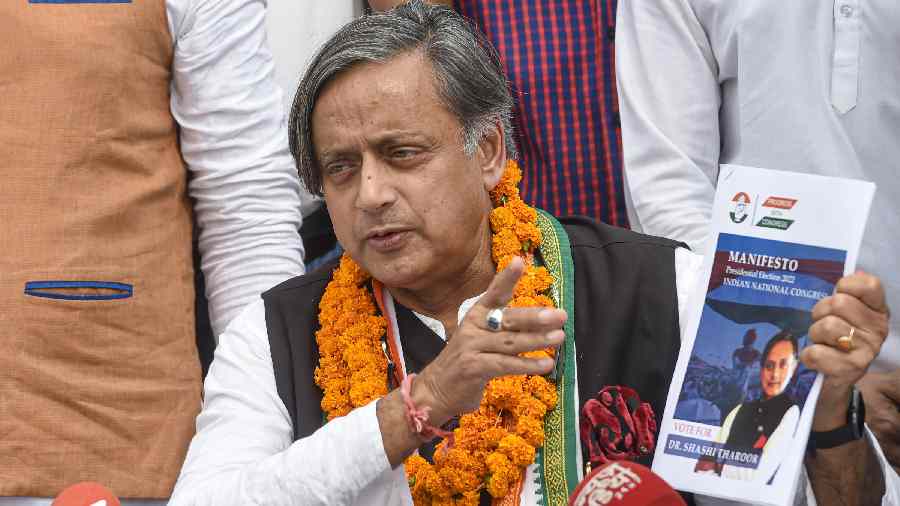 Shashi Tharoor addresses a press conference after filing his nomination papers for the post of party President in New Delhi on Friday
PTI Picture
Published 30.09.22, 06:53 PM

Congress presidential candidate Shashi Tharoor has reissued a corrected version of the country's map in his manifesto after his erroneous portrayal sparked a row, reports ndtv.com.

The manifesto initially featured a map that excluded parts of Jammu and Kashmir and Ladakh.

He reissued the map after facing backlash on social media especially from BJP followers.

Tharoor's party however stayed away from the controversy and focussed on the 'Bharat Jodo Yatra'.

Some netizens called it "a massive goof-up" and "a shameful act". Some even went to the extent of accusing Tharoor of having "a divisive agenda".

This was however not the first time when Tharoor, created a controversy over wrong portrayal of the Indian map.

In December 2019, he posted a publicity material about a Kerala Congress protest against Citizenship Amendment Act (CAA) which was afflicted with the same error.