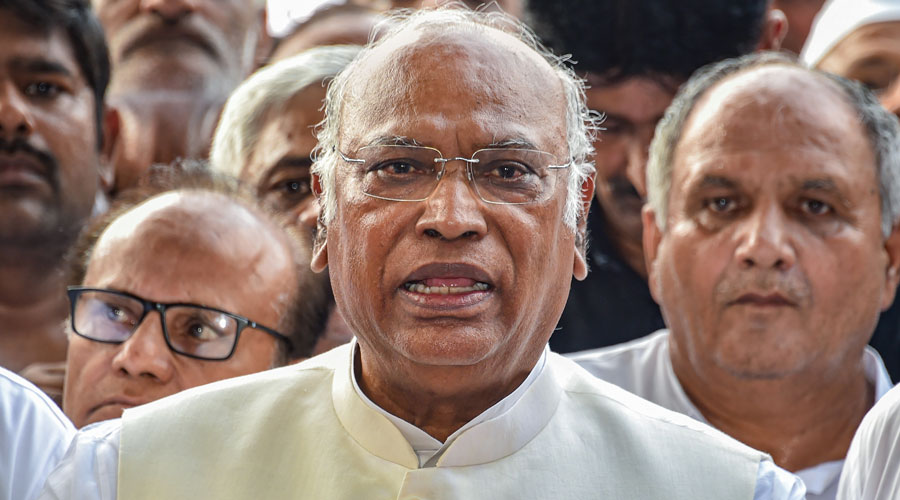 Mallikarjun Kharge, Shashi Tharoor and K N Tripathi are the three men in the Congress presidential race for which nominations end on Friday with the veteran Kharge from Karnataka emerging a clear favourite.

Tharoor, who was also part of the G-23 group, filed five sets of nomination papers, while former Jharkhand minister Tripathi filed a single set of poll papers with Madhusudan Mistry, the chairman of the Congress's Central Election Authority.

Kharge appeared to be a clear favourite for the Congress presidential election as a galaxy of leaders were present by his side when he filed his nomination papers at the AICC headquarters here.

"I was encouraged by all leaders, party workers and delegates from key states to contest the elections. I thank those who were present by my side at the time of filing the nomination papers," Kharge told reporters here.

No one from the Gandhi family was present at the AICC headquarters when the leaders filed their nominations for the election.

"I have always been fighting this battle and I am keen to fight more to uphold the ideals of the Congress party with which I have been associated since my childhood," Kharge said.

Tharoor, 66, described his electoral opponent Kharge as the 'Bhishma Pitamah' of the party.

"It is a privilege to serve the only party in India with an open democratic process to choose its leader," Tharoor said after filing his nomination papers.

"It is a friendly contest that is going to happen. We are not enemies or rivals. No disrespect to him but I will represent my ideas," the Lok Sabha member from Thiruvananthapuram told reporters.

Friday was the last day for filing nomination papers. Over 9,100 delegates are eligible to cast their votes in the October 17 election. The result will be announced on October 19.