UP: Schoolchildren ‘tricked’ into ‘kill’ oath to create Hindu Rashtra

In a video tweeted from the handle of Suresh Chavhanke, CMD and editor-in-chief of Sudarshan News, a man administers an oath to over two dozen boys and girls 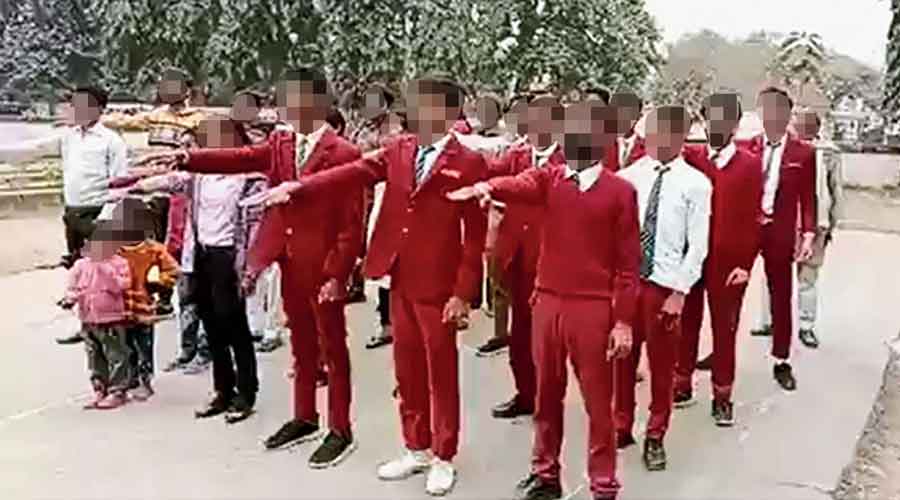 Footage shows the schoolchildren (faces blurred by this newspaper) taking the pledge to “fight, die and kill” to create a Hindu Rashtra.
The Telegraph
Piyush Srivastava   |   Lucknow   |   Published 30.12.21, 03:04 AM

A video circulated from a news channel head’s Twitter handle that shows school children pledging to “fight, die and kill” to create a Hindu Rashtra was filmed through subterfuge by people who “meant mischief”, the management of the private school has told The Telegraph.

Jitendra Singh, manager of Vimla Inter College at Robertganj in Uttar Pradesh’s Sonbhadra district, said a crew that introduced themselves as from Sudarshan News had asked to take boys from the school to a nearby park for a debate they said they wanted to film.

“Even I am a Hindu but I don’t approve of fanaticism. I condemn it and will support any inquiry against such elements,” he told this newspaper over the phone on Wednesday morning.

The video was tweeted from the handle of Suresh Chavhanke, CMD and editor-in-chief of Sudarshan News, on Tuesday, days after clips had surfaced of a similar oathtaking in Delhi for a Hindu Rashtra and a call for genocide against Muslims was sounded at a conclave of sadhus in Haridwar.

In the latest video, a man administers an oath to over two dozen boys and girls, including some in school uniform — maroon blazer or sweater, maroon trousers and white shirt — and others in casual wear. A few toddlers are seen standing at the front.

The children extend their right arm forward and take this oath in Hindi: “We give our word, we pledge to fight, die and kill, if necessary, and be ready for any sacrifice till the last moment of our lives to make this country a Hindu Rashtra and take it forward at any cost. We shall not step back even for a moment. May our Gurudev, our Kul Devata (family god), our Gram Devata (village god), our ancestors and Bharat Mata give us strength and victory.”

Jitendra said: “I saw some people at the school gate talking to students as the school was closing on Tuesday afternoon. I asked what was going on. Those people said they were from Sudarshan News — their microphones bore the name — and wanted the students to gather at the nearby Chacha Nehru Park for a debate on rashtra dharma (national duty).”

He added: “I had seen television reporters interview common people, so I didn’t object…. I have learnt that five Class XI students and five Class XII students from our school were in the park. I shall, if necessary, ask the students and their parents to take legal action against those trying to violate our Constitution.”

Shiv Narayan Lal, principal of the school which teaches students from Classes VI to XII, said: “There is no question of supporting any such violent ideology. We knew our students had been taken to the park but didn’t know that the people from the news channel meant mischief.”

Chavhanke had, while tweeting the video, written in Hindi: “Oathtaking for Hindu Rashtra is going on at several places in India. These schoolchildren from Sonbhadra in Uttar Pradesh challenged the anti-Hindus by taking oath.”

When this newspaper called Chavhanke’s office to seek his reactions to the alle¬gation of duping the school and the children, the person who received the call suggested that any questions be sent via Twitter.

A question was posted to Chavhanke on Wednesday morning. No reply had arrived till late in the evening.

Sonbhadra superintendent of police Amrendra Pratap Singh told this newspaper that the police had on their own started an inquiry into the event since it advocated violence.

“I shall be able to share the details once the inquiry has been completed,” he said.

A similar video showing youths taking exactly the same oath as the Sonbhadra children — with a banner of the Hindu Yuva Vahini behind them — had surfaced last week. Delhi police have confirmed that the event took place in the capital on December 22. No case has been filed yet.

Yogi Adityanath, now Uttar Pradesh chief minister, had founded the Vahini — a militia accused of violence and intimidation — in the late 1990s when he was Gorakhpur MP.

At the December 1719 Dharma Sansad in Haridwar, Uttarakhand, several speakers advocated an ethnic cleansing of Muslims to help create a Hindu Rashtra.

An FIR has been registered against some of the speakers but no arrests have been made.

Sadhu: No remorse for Gandhi abuse