Organistaion moves Kerala HC over use of halal jaggery in Sabarimala 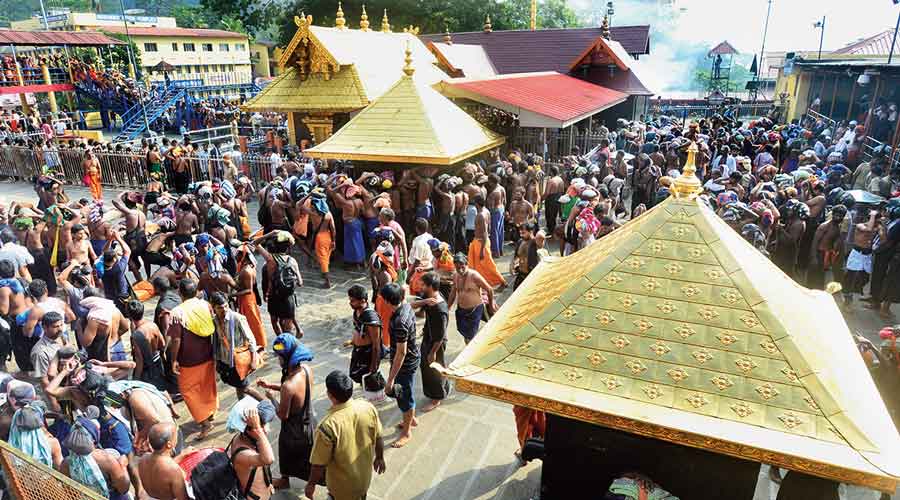 An organisation of Sabarimala devotees has petitioned Kerala High Court claiming the jaggery being used in temple prasadam is halal-certified and therefore poses a health risk from the way it is manufactured apart from offending Hindu sentiments.

The Travancore Devaswom Board, a state government body that governs the shrine, told the court on Thursday that a consignment of jaggery bought sometime earlier was indeed halal-certified, but it had been auctioned off to be used as cattle feed.

It said the consignment had been bought in the hope that the Covid restrictions would be eased and pilgrim visits allowed. But the nod to reopen the shrine to devotees never came till November 15 — the start of the main pilgrim season — by when the old consignment had been auctioned.

“Halal” means “lawful” and refers to what is allowed under Islamic law.

Petitioner S.J.R. Kumar, a former state president of the Vishwa Hindu Parishad, has claimed: “The religious scholars of the Muslim community have been proclaiming publicly that saliva is a necessary ingredient for certifying halal in the preparation of food material.”

An Islamic scholar dismissed the claim — being echoed on social media by Right-wing proponents — that food is made halal by spitting on it.

“And no Islamic scholar would say so since Prophet Mohammed had clearly said that one should not blow or spit on food since anything edible has to be clean and hygienic,” Basheer Faizi Deshamangalam, the Kerala-based scholar, told The Telegraph.

Deshamangalam said he had never heard of jaggery being halal, but added that all it should mean is that the stuff is clean and fit for consumption and is not stolen goods.

Large quantities of jaggery go into two key offerings (nivedyam) — aravana and unniyappam — made to the Sabarimala deity, Ayyappan. These offerings are later distributed among the devotees as prasadam.

According to the petition filed on Wednesday by Kumar, state general convener of the Sabarimala Karma Samithi, an organisation formed by devotees to protect the temple’s traditions, a consignment of jaggery bought from a Maharashtra-based company had come in bags certified “halal”. The petition adds that the tender for the jaggery was floated in July this year.

The petition seeks directives to the Travancore Devaswom Board to stop distributing prasadam made with “impure” halal jaggery and withdraw the jaggery from any further use at the temple.

Apart from the jaggery posing a health hazard for devotees who eat the prasadam, “it is highly disheartening to see that food materials prepared following the rituals and religious practices of another religion with its certification is accepted as food material for nivedyam/ prasada in a Hindu temple having its own rituals and customs”, the petition says.

On Wednesday, the standing counsel for the Devaswom Board told the court that all prasadam is scientifically tested for health safety at a dedicated laboratory at the temple.

The division bench of Justices Anil K. Narendran and P.G. Ajithkumar directed the state (Devaswom Board) in an interim order on Wednesday to file its response on Thursday. The next hearing is on Monday.

The Devaswom Board has lodged a police complaint against the rumours being spread on social media about the quality of prasadam made with allegedly halal jaggery, saying such canards create strife in society.

Kumar was among those who had opposed any changes to the Sabarimala temple’s traditions after the Supreme Court in 2018 lifted the centuries-old ban on women of childbearing age entering the shrine.

The Left Democratic Front government’s decision to implement the court order had triggered large-scale protests by devotees led by the Sangh parivar and the Congress. A review petition is lying before the apex court, and the state has decided not to implement the original order until the final verdict is passed.