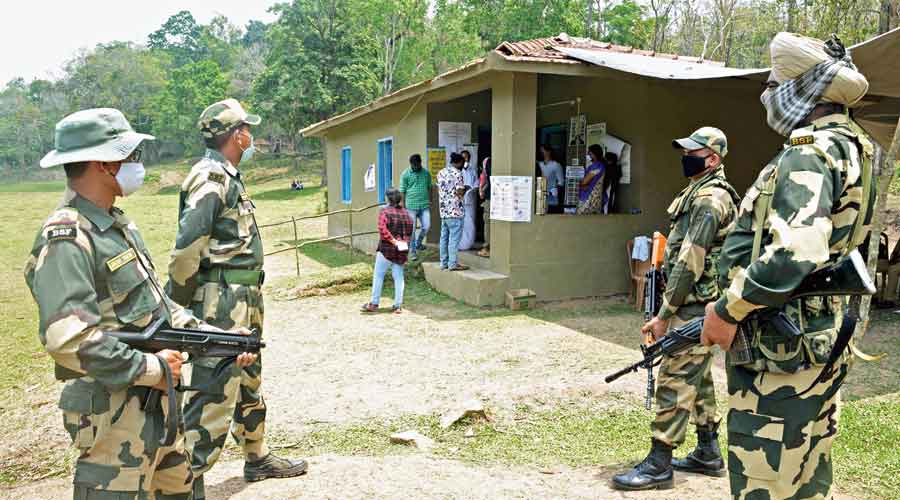 Congress and BJP leaders tried to keep alive the Sabarimala controversy as Kerala voted on Tuesday, condemning the Left government for helping women of childbearing age enter the shrine after the Supreme Court lifted the traditional bar on them in September 2018.

Speaking to reporters outside the booths after voting, senior Opposition politicians continued to have their say on the matter, compelling the Left leaders too to react and defend their government.

“I feel the believers have been protesting for quite a while. They are still doing the same,” he said, effectively discarding his organisation’s tradition of equidistance from all parties.

Chief minister Pinarayi Vijayan, who voted in the Dharmadam constituency, reacted to Nair’s statement saying: “Swami Ayyappan and all the gods are with this government.”

State CPI general secretary Kanam Rajendran said: “His (Nair’s) statement makes it clear he has politics on his mind. The LDF (Left Democratic Front) manifesto says it will protect all faiths.”

Leader of the Opposition and Congress veteran Ramesh Chennithala said the Left government would have to “face the wrath of Swami Ayyappan”.

Even Congress MP Shashi Tharoor, who rarely comments on the sensitive subject, said the Left government had done “too little too late” when it came to repairing the damage.

“This wouldn’t have happened if they had thought about Ayyappan when they sent people wearing helmets and flak jackets to the temple,” he told reporters after voting.

The allusion was to the state government providing police escorts to women of childbearing age who wanted to enter the hill shrine in the winter of 2018-19.

Widespread outrage at the government move had helped the Congress-led UDF sweep 19 of Kerala’s 20 Lok Sabha seats in the 2019 general election. However, the issue seemed not to exert the expected leverage in the December 2020 local body polls, which went the Left’s way.

But the controversy was rejuvenated when state devaswom (temple affairs) minister Kadakampally Surendran expressed “regrets” at the developments that followed the 2018 apex court verdict. This was construed as an admission that the government’s move to implement the judgment was a mistake.

However, the CPM quickly clarified that its government had done nothing wrong. At the same time, Vijayan appeared to hold out an olive branch saying that once the apex court ruled on the pending review petitions, his government would consult all stakeholders before deciding what to do.

“This is the kind of thing asuras do. The chief minister is the biggest asura. He is now making this somersault realising that the voters would remember the heinous encroachments,” he said.

Surendran is contesting from Konni as well as Manjeshwar in Kasaragod district in the state’s extreme north.