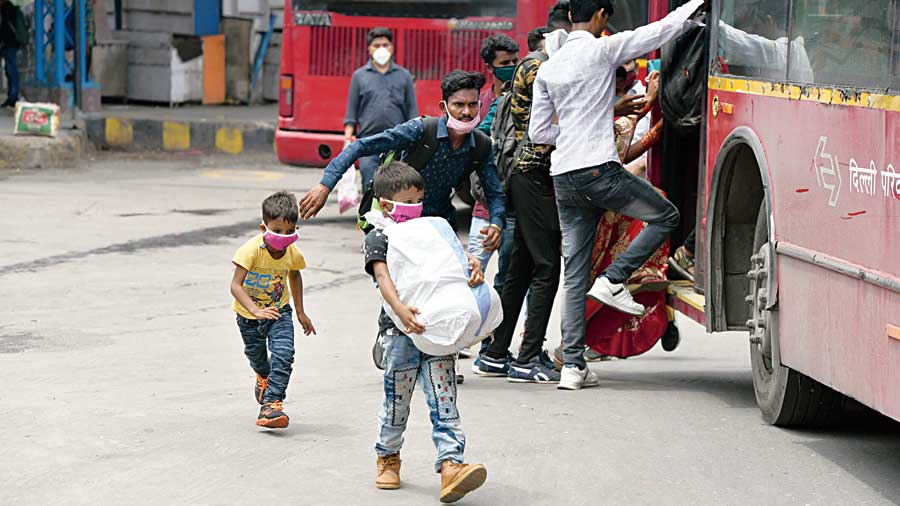 The government had faced severe criticism from Opposition parties and civil society groups last month after it told Parliament, in reply to MPs’ questions, that it had no data on the migrant workers who had died during the lockdown
File picture
Basant Kumar Mohanty   |   New Delhi   |   Published 20.10.20, 12:51 AM

The Centre is poised to launch three surveys to collect data relating to the wages and social security of, respectively, migrant labourers, domestic workers and those like lawyers’ or doctors’  assistants or receptionists.

The government had faced severe criticism from Opposition parties and civil society groups last month after it told Parliament, in reply to MPs’ questions, that it had no data on the migrant workers who had died during the lockdown.

Shortly after the MPs had submitted the written questions, the labour and employment ministry had on September 9 set up a 15-member committee chaired by S.P. Mukherjee, a professor emeritus with Calcutta University, to design the surveys and their methodology.

Government sources said the surveys were expected to begin in November and would take six to seven months to complete.

Labour economists said there were no credible, up-to-date data on any aspect of migrant workers’ lives and livelihoods — such as their number, wages or state-wise and sector-wise distribution.

A 40-year-old law says that migrant workers must be registered both in their home state and workplace state. But several committees, including a parliamentary standing committee, have found that most of the states never implemented this law.

So, the government had no data on them during the lockdown, which left millions of migrant workers jobless and stranded. Many perished while attempting to walk hundreds of miles home virtually on empty stomachs.

Enumerators of the labour bureau, a government body, will conduct the surveys.

The surveys will tap households, employers and the government agencies that register commercial establishments or keep records about them, said Amitabh Kundu, labour economist and committee co-chairperson.

“There aren’t much data on domestic workers or the people engaged (as helpers) by (unregistered) professional firms or individual professionals (such as lawyers, architects or doctors),” Kundu said.

“The government wants to know about the remunerations and social security of these categories of workers.”

The law on occupational safety and health mandates the creation of a database of migrant workers, and the wage code allows domestic workers to seek the minimum wage.

Kundu said the committee had a three-year tenure and would, whenever required, oversee the conduct of similar surveys to generate data for policymaking.

Although the government has no data on deaths among the migrant workers, public database Thejesh GN has found that at least 972 migrant workers died from lockdown-related causes between March 25, when the lockdown was enforced, and August end.

The causes of death included starvation, financial distress, exhaustion while travelling home under primitive conditions, road and train accidents, lack of medical care, suicide, and withdrawal symptoms brought on by the unavailability of alcohol.

Among the other causes were brutality by police, who often targeted home-bound migrant workers for violating the lockdown restrictions, and attacks by criminals on the way home. Forty-nine of the deaths occurred at the quarantine centres, known to be overcrowded and bereft of amenities.