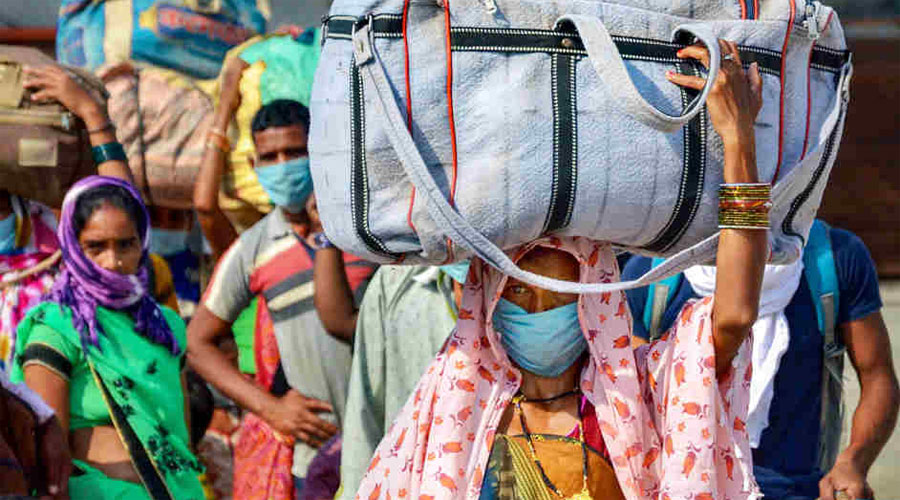 Migrants from Chhattisgarh arrive at Amritsar railway station to board a special train to return to their native places on June 4.
PTI file picture
Basant Kumar Mohanty   |   New Delhi   |   Published 09.10.20, 03:04 AM

The average income had plummeted 85 per cent by mid-August among returned migrant workers while 35 per cent of them had no work at all, a survey has found.

It has discovered that two-thirds now want to return to their outstation workplaces, the continuing hardship forcing a change of heart after millions had vowed never to step out again following the miseries of the initial days of the lockdown.

If the scenes of suffering hordes walking hundreds of miles home captured that early horror, the June 30-August 15 telephone survey of returned migrants across six states has emphasised the lockdown’s continuing impact.

The report “Migrant workers: A study on their livelihood after reverse migration due to lockdown” by the Inferential Survey Statistics and Research Foundation, a body of retired Indian Statistical Service and Indian Economic Service officials, was released on Thursday.

Some 67.64 per cent wanted to return to their workplaces, where — 75 per cent of them reckoned — there would be better job opportunities.

Labour minister Santosh Gangwar had told the Lok Sabha on September 14 that 80 crore people were being provided 5kg wheat or rice and 1kg of pulses free every month in addition to their usual entitlements under the National Food Security Act.

Gangwar said 20.65 crore women Jan Dhan account holders had been given a cash assistance of Rs 500 a month for three months, while three crore pensioners had received a one-time ex-gratia assistance of Rs 1,000.

Besides, the government said it had allocated an additional Rs 40,000 crore under the Mahatma Gandhi National Rural Employment Guarantee Act, which promises every rural household up to 100 days’ work a year.

However, the survey found that while the job scheme was supposed to absorb a substantial number of the returned migrants, it provided employment to just 3.53 per cent of them.

While many of the returned migrants did casual work for an average of 4.59 days a week, nearly half were paid less than the minimum wage. About 35 per cent had no work.

The survey found that 50 per cent of the migrants were salaried workers before the lockdown while 42 per cent were casual workers and the rest were self-employed.

Another finding was that some states had started giving free rations to the stranded migrants during the early days of the lockdown, but it was too little. Only 4 per cent received the free rice and less than 2.57 per cent received free wheat and dal.

P.C. Mohanan, former acting chairperson of the National Statistical Commission who attended the report’s web release, told The Telegraph the survey had substantiated with data the general perception that the government had not taken the migrants’ concerns into account adequately while imposing the lockdown.

“The survey has found that there was hardly any support for sustaining their income or rations at their place of work,” he said.

Mohanan highlighted that the country currently has no system to absorb migrants under the public distribution system.

“One piece of good news is that two-thirds of the returned migrants want to return to their work sites. Now most of the travel, including train travel, has become expensive.

The central and state governments should ensure they can go back to their workplaces without any financial burden,” he said.

Only expensive special trains are now running in the country.

Ashok Gulati, former commissioner for agricultural cost and prices, said: “To me, the income loss is the most alarming aspect.”