From eating out to beach therapy, these celebs sure know how to have a chill holiday 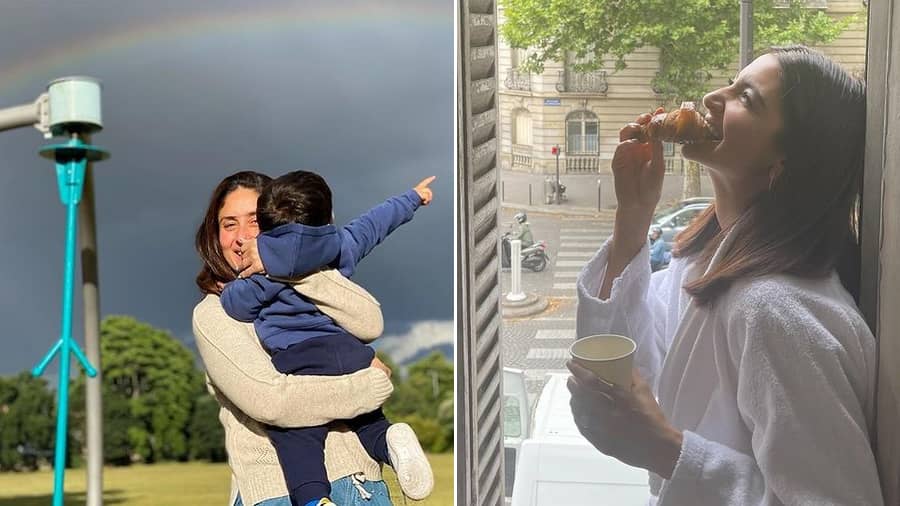 It has been raining vacays for both Bollywood and Tollywood celebs. From Kareena Kapoor Khan and Saif Ali Khan enjoying family time in London, Neha Dhupia having a blast in Maldives, Sandipta Sen chilling in Philippines to Trina Saha and Neel Bhattacharya having a blast in Phuket — these celebs are giving us wanderlust with their recent pics. Take a look…

The Chakda Express actress was recently in Paris, from where she shared the view from her room and a short video of Parisian dusk on social media. Anushka also shared her croissant-moment on her Insta feed, where the Rab Ne Bana Di Jodi actress can be seen having a gala time in a white bathrobe. Reportedly, she was accompanied by hubby Virat Kohli and their daughter Vaamika on the trip.

A flying kiss to the hubby amidst sea, sand and sun, some me-time in a pastel green monokini, chilling in the pool in a pink swimwear — Neha Dhupia shared a couple of cool pics from Maldives on her social media handle, making her fans go ‘awwww’.

Basking under the London rainbow with little Jeh, taking a memory ride to husband Saif Ali Khan’s school in Winchester with Taimur, kiss-ready in front of the English Channel to pouting with her gal pals — Kareena Kapoor, who will be next seen in an upcoming Netflix film by Sujoy Ghosh, vacayed in style and we can’t stop gushing over the photos.

Katrina Kaif celebrated her 39th birthday with husband Vicky Kaushal and friends at the luxury Soneva beach resort in Maldives. Sporting easy breezy beachwears, the team enjoyed their ‘vitamin sea and sand’, and we would like some too! The actor couple will soon be seen in Phone Bhoot and Sam Bahadur respectively.

In London, recently for the screening of his latest directorial venture, Abhijaan, at the Bengal Heritage Foundation and his recent film Ghore Pherar Gaan at the London Indian Film Festival, Parambrata impressed everyone in a yellow and white kurta-pajama set and blue formals. The Dwitiyo Purush actor also shared glimpses from “a day at Edgbaston… and hat tip to a super fine innings by the inimitable @rishabpant.”

The actor will be next seen in Raja Chanda's rom-com Bibaha Bibhrat with Abir Chatterjee and Lahoma Bhattacharya.

Trina’s “Sunday plan” looks so appealing that we can’t wait to have a ditto version (and pronto). The popular television actress, who is currently working in the Bengali serial Khorkuto, has been sharing her playful Phuket moments with husband Neel Bhattacharya. In statement jewellery and dresses, Trina’s summer fashion is on point. On the other hand, Neel aka Abhimanyu from the Bengali serial Uma, is seen romancing his lady love in comfy tees and shorts.

Sandipta Sen, who became a household name with her debut Bengali TV serial, Durga, recently went to Phillipines and shared her beach vibes with her fans on social media. The actress looked super hot in sarongs, shrugs and floral dresses.