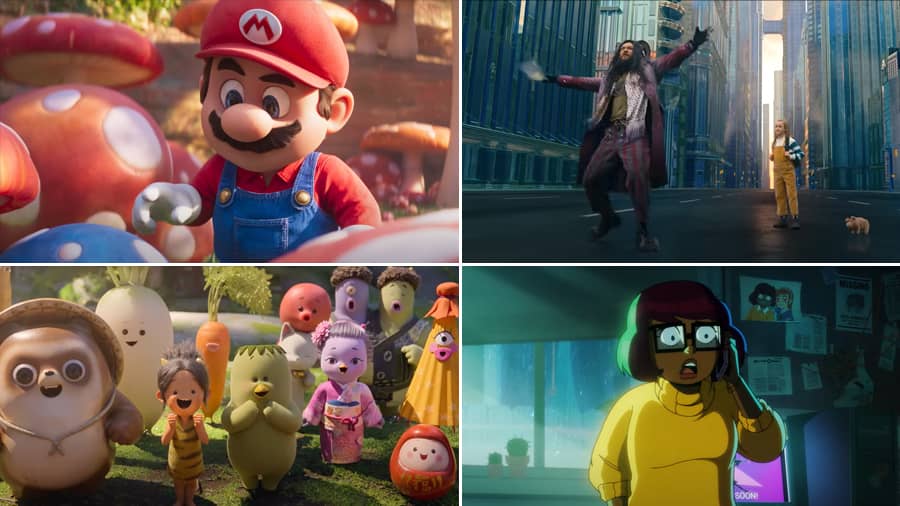 Universal Pictures has released the teaser trailer of this animated feature film, directed by Aaron Horvath and Michael Jelenic, based on Nintendo's popular arcade video game Super Mario. Hollywood actor Chris Pratt has rendered the voice for the main protagonist.

The Super Mario Bros will hit the cinemas on April 7 next year.

The official trailer of Slumberland, shared by Netflix, promises an epic adventure through Christmas dreams. Featuring Aquaman star Jason Momoa and Marlow Barkley, the film is directed by Francis Lawrence, the man behind The Hunger Games movies.

The almost three-minute-long trailer is a mix of vivid fantastical and magical elements. It follows a young girl (Barkley) who discovers a secret map to the dreamworld of Slumberland with the help of an eccentric outlaw (Momoa). The duo face several hurdles on the way.

Slumberland will be streaming on Netflix from November 18.

Netflix has come up with the official trailer of its upcoming animated-fantasy series ONI: Thunder God’s Tale, which features the voices of George Takei, Craig Robinson, Momona Tamada, Brittany Ishibashi and Tantoo Cardinal.

The synopsis reads, “In a world filled with Japanese mythological oddball gods and monsters, one of the creatures' free-spirited daughters, Onari, is determined to follow in the footsteps of the mighty heroes of lore, but her unique powers are yet to be revealed. Does she have what it takes to fight to protect her peaceful village from the encroaching threat of the gods' mysterious enemies, the ‘Oni’?”

ONI: Thunder God’s Tale will be streamed on Netflix from October 21.

The official teaser of HBO Max’s upcoming adult animated comedy series Velma has come out. The series is based on the brains of the Scooby-Doo Mystery Inc. gang Velma Dinkley. Co-created by Mindy Kaling and Charlie Grandy, Kaling will also voice the titular character.

The synopsis reads, “VELMA is an adult animated comedy series telling the origin story of Velma Dinkley, the unsung and under-appreciated brains of the Scooby-Doo Mystery Inc. gang. This original and humorous spin unmasks the complex and colorful past of one of America’s most beloved mystery solvers.”

Velma will start streaming on Netflix from November 24.

HBO has dropped a new teaser for its upcoming series The Idol, a series offered by Sam Levinson. The series stars Lily-Rose Depp, Troye Sivan, Tunde Adebimpe and Blackpink’s Jennie.

The teaser chronicles a female pop star as she becomes entangled with an LA-based nightclub owner. The series is said to be a take on the dirty secrets of the cut-throat music industry of Los Angeles.