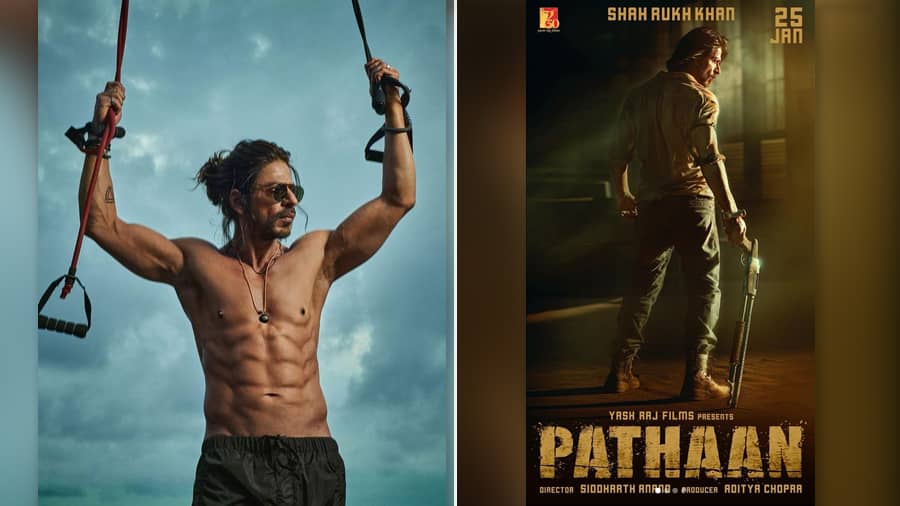 Shah Rukh Khan on Saturday released a new look from his upcoming film Pathaan to mark his completion of three decades in the Hindi film industry. He also announced that the movie, produced by Yash Raj Films, will hit theatres on January 25, 2023, in three languages — Hindi, Tamil, Telugu.

A few weeks after revealing Jawan's first look, Shah Rukh unveiled Pathaan's motion poster on Saturday to mark the special occasion. In the new rugged look, Shah Rukh stood with his back facing the audience, flaunting his toned muscular body, and carrying a gun in his right hand. 'Jaldi milte hai Pathaan se,' announced Shah Rukh at the end in his signature style. There is a stark resemblance between Jawaan and Pathaan's look and feel so if you are getting confused, you are not alone.

On this day, Shah Rukh debuted with Deewana 30 years ago. He thanked his fans on social media for the immense love he has received from people across the world. His post read, “30 yrs and not counting cos ur love & smiles have been infinite.”

Shah Rukh seemed to have undergone a rigorous training regime and maintained a special diet for Pathaan, touted as a spy thriller.

In a statement released by YRF, Pathaan's director Siddharth said, “30 years of Shah Rukh Khan is a cinematic moment in itself in the history of Indian cinema and we wanted to celebrate it with his millions and millions of fans globally. Today is Shah Rukh Khan day and we need to tell the world that.' He added, “Shah Rukh Khan’s look from Pathaan was the most heavily guarded imagery. Fans across the world have been frantically demanding for his look to be unveiled for a long, long time now and we couldn’t think of a better day to reveal this to his fans and audiences. I hope people and SRK fans love his look from Pathaan.”

After Pathaan's release, Shah Rukh's next two big films — Atlee's Jawan and Rajkumar Hirani's Dunki are lined up in June and December respectively. 2023 seems to be a supremely busy year for the superstar.

Reports say he has special appearances in R Madhavan's Rocketry: The Nambi Effect and Ayan Mukerji's Brahmastra Part One: Shiva starring Ranbir Kapoor and Alia Bhatt in the lead.