The Gully Boy actor has found company in the likes of Milind Soman, John Abraham, Vijay Deverakonda and Aamir Khan 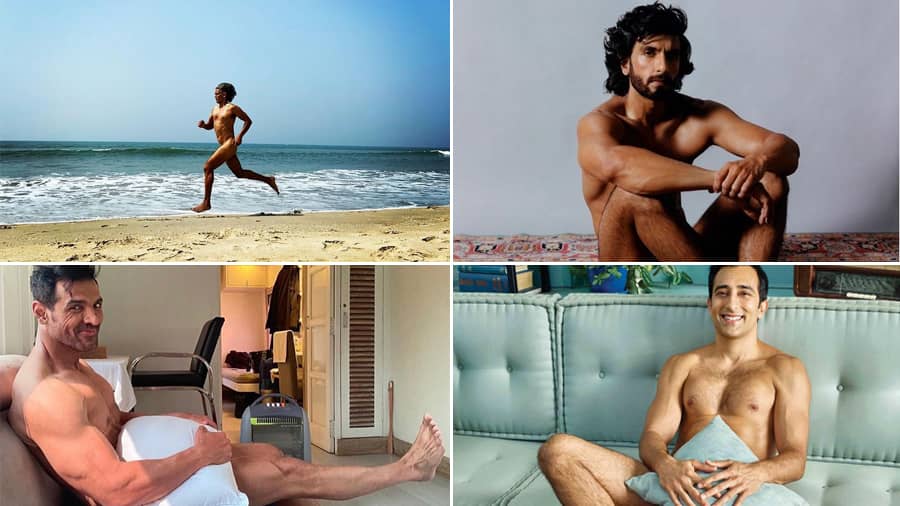 Ranveer Singh’s nude photoshoot for a magazine may have sparked a controversy but he’s not the first Bollywood hunk to pose in the buff.

Here’s a list of Bollywood men who dared to bare and some even managed to do it without much brouhaha.

In 2020, Milind Soman posted a picture clicked by his wife Ankita Konwar to celebrate his 55th birthday. The actor and fitness enthusiast was seen running full Monty on the beach side. Milind is also remembered for his controversial 1992 photoshoot with his then-girlfriend Madhu Sapre. The models posed stark naked with just a snake wrapped around them for an ad commercial.

With a body to die for, John Abraham took to Instagram to share a sneaky picture with his followers. Sitting in his vanity van, the Satyamev Jayate actor barely covered himself with a pillow, flashing a charming smile. Even for Kabir Khan’s New York, John bared all.

Rahul Khanna, the actor-entrepreneur, recently posted an almost nude picture of him wearing nothing but maroon socks and a pillow to cover him up. A cheeky caption followed the picture, which was to promote his accessories brand.

Janhvi Kapoor might have called him ‘cheesy’ on Koffee with Karan, but the actor is far from that. Vijay Deverakonda posed nude with just a bouquet of roses to protect his modesty in the poster of his upcoming movie Liger, which also stars Ananya Panday. It was also called out for imitating Aamir Khan’s PK poster.

An actor, playwright, theatre director and writer, Manav Kaul recently launched his own collection of poetry. The multi-talented playwright shared a beautiful cover of his upcoming book, Karta Ne Karam Se. Designed by Varun Chawla, the cover of this collection has Manav posing nude on top of a huge thumbprint. The artsy-yet-bold cover was loved by his fans and followers on Instagram.

Aamir Khan was caught in the middle of a controversy surrounding the poster of PK. Directed by Rajkumar Hirani, this film was loved by the audience, but Aamir’s bold move to strip for the film’s poster caught his fans unawares. The actor posed a nude with just a radio covering him on the rail tracks, where his character ‘PK’ famously loses a pendant that would take him back home.

Neil Nitin Mukesh shocked everyone with his nude scene in Madhur Bhandarkar’s Jail, which introduced male frontal nudity for the first time in Bollywood. The movie also starred Manoj Bajpayee and was about the life of a man, Parag, who is falsely implicated in a crime he did not commit.

Rajkummar Rao has always been lauded for his performance.For Hansal Mehta’s Shahid, the actor played a character inspired by the life of activist-lawyer Shahid Azmi, where he had to bare all for an intense scene.

In his debut film Saawariya, directed by Sanjay Leela Bhansali, Ranbir Kapoor was seen dancing with a towel barely covering his midriff. While the melodious song Jabse Tere Naina played out, Ranbir danced around the room with only a towel tied around his waist. For a debut film, this was quite a bold move.