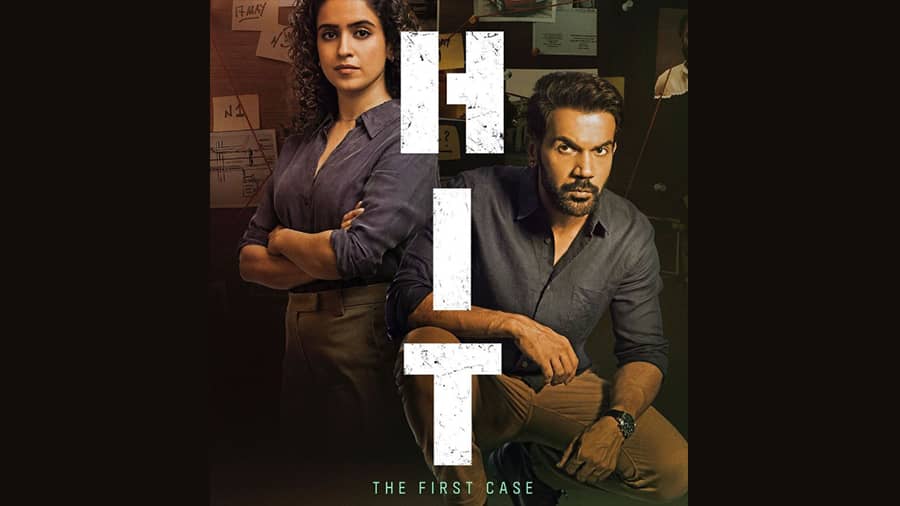 Actor Rajkummar Rao on Thursday said he is excited about his upcoming film HIT- The First Case, which gave him the opportunity to try his hand at acting in the action genre.

The suspense thriller is a remake of the 2020 Telugu hit of the same name and is directed by Sailesh Kolanu, who had also helmed the original film.

HIT- The First Case narrates the story of Vikram, a cop played by Rajkummar. Vikram, who is investigating the case of a missing woman, also battles with post-traumatic stress disorder as he stumbles upon evidence and joins missing links in the case. The film also stars Sanya Malhotra.

Rajkummar, a trained martial artist, said he had a lot of fun doing action in HIT- The First Case.

“Nobody has given me action to do before HIT. I thoroughly enjoyed it. The action is real, organic and raw. This is a film I am proud of, it is presenting me in a different avatar. It is a good investigative thriller,” the actor told reporters here at the trailer launch of the film.

“People don’t realise they are going through something like that. So, it is important to have that conversation. I am glad that through our film we might have a beginning of that conversation. Like, how Badhaai Do was a fun film but towards the last 20 minutes, you see the pain the characters go through. Same here, the character is carrying that baggage throughout the film...” he added.

Sailesh said his vision was to make a cop universe through HIT- The First Case.

“Like in Telugu, we have made a second case and we plan to make it in Hindi too. I want to create a cop universe. My vision is to bring all the officers together. There will be subsequent cases through personal arcs and we will work with Raj and Sanya. The intention is to make it into a huge cop universe where the boundaries are blurred,” the filmmaker said.

“With this film, the journey has started. Like this is HIT- The First Case, then there is the second case,” added Rajkummar.

For the Hindi adaptation, Sailesh said he ensured to not make the exact copy of his own Telugu film.

“It was a conscious effort to not make it copy and paste. The soul of the film is the same. It is my vision so we didn’t want to copy it but recreate it and make it big. We unlearnt and tried our best to make it a fresh film,” he said.

Sanya said she is excited to have a theatrical release after quite some time. Her last theatrical release was Photograph, which hit the screens in 2019. Her recent films such as Ludo, Shakuntala Devi, Pagglait and Meenakshi Sundareshwar released on streaming platforms.

“I am excited for the film. As an audience, I am excited to see myself on a bigger screen. OTT is nice but there’s a different joy of (watching films in) theatres,” she said.