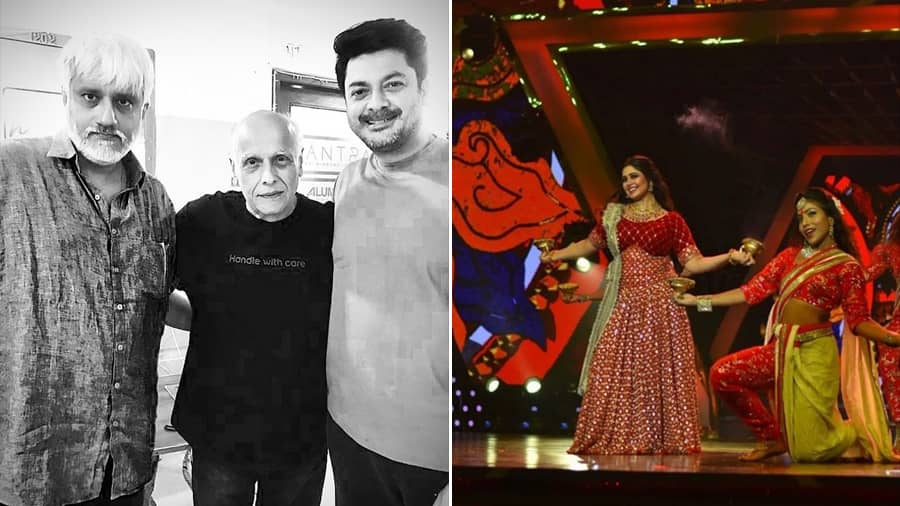 Jisshu Sengupta shared a picture of himself with Mahesh Bhatt and Vikram Bhatt, and his fans are eagerly expecting an announcement. The actor had played an important role in the Alia Bhatt-Sanjay Dutt-starrer 2020 Hindi film Sadak 2.

Saswata Chatterjee shared a photo with daughter Hiya Chatterjee from a fashion show. “Hiya's first appearance on the ramp and she aced it with grace,” he wrote.

Ritabhari Chakraborty, who has performed at the inaugural ceremony of International Film Festival of India (IFFI) in Goa for two years in a row now, danced to Bengali and Assamese songs at the ceremony this year. The actress shared glimpses from the show with photographs of herself with Varun Dhawan, Sara Ali Khan, Kartik Aaryan and other Bollywood celebrities.

Yash Dasgupta flaunted his biceps in a black-and-white photo.

Nusrat Jahan shared a transition reel in which she switched from a casual look in a red T-shirt to one in a red suit.

Ritwick Chakraborty shared a picture of himself reading a book on the sets of an upcoming film.

Anindita Bose had a blast with her co-actors from The Storyteller —Paresh Rawal and Adil Hussain— at IFFI 2022 in Goa. The Storyteller is based on Satyajit Ray’s short story Golpo Boliye Tarini Khuro and also stars Revathy.

Devlina Kumar shared a picture of herself in Giza, exploring the pyramids.