Advertisement
Home / Entertainment / Backed out of 'Hera Pheri 3' because I was not satisfied with the script: Akshay Kumar

Backed out of 'Hera Pheri 3' because I was not satisfied with the script: Akshay Kumar

For me, 'Hera Pheri' is a part of life, my journey in a huge way. I'm equally sad about it and that I'm not able to do the third part, says the superstar 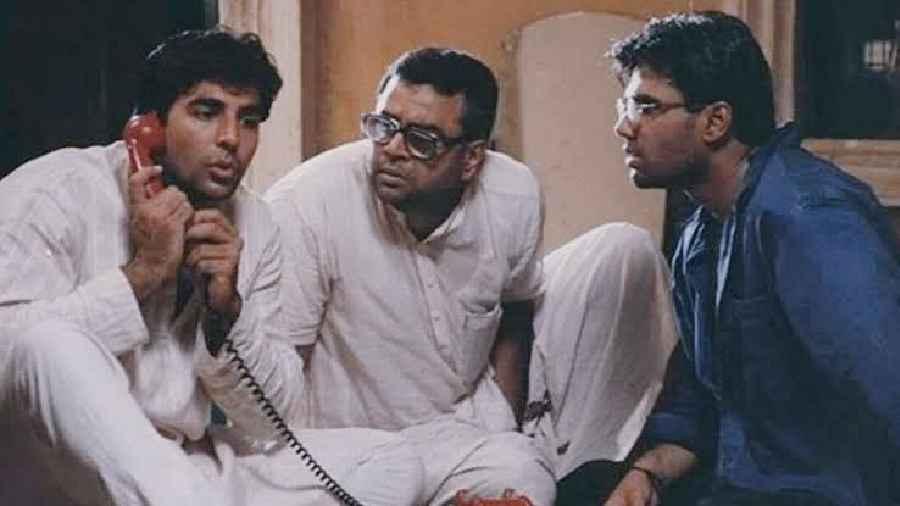 Superstar Akshay Kumar on Saturday confirmed his exit from the beloved Hera Pheri franchise and cited creative differences as the reason for not signing the upcoming third installment.

Kumar starred alongside veteran actor Paresh Rawal and Suniel Shetty in the original Hera Pheri, which released in 2000 and went on to achieve the status of a cult comedy. It was followed by a sequel Phir Hera Pheri (2006), with Kumar reprising his role of Raju, Rawal returning as Babu Bhaiya and Shetty as Shyam.

The third part has been in the works for quite sometime and earlier this week Rawal confirmed that the movie will soon get into production with Bhool Bhulaiyaa 2 star Kartik Aaryan taking over the role of Raju.

"'Hera Pheri' has been a part of me. A lot of people have memories and even I have good memories of it. But I feel sad that we haven't made the third part for so many years. The film was offered to me but I was not satisfied with the screenplay and the script. I was not happy with it," Kumar said at the HT Leadership Summit here.

The actor said "Hera Pheri" franchise has been a huge part of his life and journey in the films and he is "sad" about not being able to contribute to the upcoming installment.

"I have to do what people want to see. So I backed out. For me, 'Hera Pheri' is a part of life, my journey in a huge way. I'm equally sad about it and that I'm not able to do the third part. But I'm not happy with the way things have shaped up creatively."

The reports of Aaryan boarding "Hera Pheri 3" was followed by hashtag #NoRajuNoHeraPheri trending on Twitter. Kumar said while he is overwhelmed by the love of his fans, he won't be featuring in "Hera Pheri 3".

"I saw some tweets saying 'No Raju, no Hera Pheri'. As much as hurt they feel, I'm hurt as well. It's sad thing but they kept this topic trending on social media and I want to thank them. I realise the length and breath of my fan following now. They love me so much but I apologise to them that I won't be doing 'Hera Pheri'," he added.

Kumar was joined by "RRR" star Ram Charan for the session. Asked about the dull run of Hindi films at the box office, the Bollywood star called for an overhaul in the way films are made as well as distributed.

"Audience want something different...We should sit down and try to give them that... It is our fault. It is not the audience fault that they are not coming. We have to rethink and dismantle what we have made in the past. We have to just put it all down and start all over again," he said.

The actor, known to be one of the most bankable stars in the Indian film industry, has had series of debacles in 2022, with films like "Bachchan Pandey", "Samrat Prithviraj" and "Raksha Bandhan" not faring well at the ticket window. His latest release "Ram Setu" is also struggling to enter the 100 crore club.

Kumar said he now wants to start in "completely different way" and is also ready to slash his fee.

"I want to start in a completely different way and that is what I have started doing...We have to understand what audience requires.

"There are a lot of other factors as well. This is not something that only actors can do.... but producers and theatre owners will have to think about it as well. Personally, I have to bring down my fee by 30 to 40 per cent. Similarly, theatre owners will also have to understand this."

At the 2019 edition of HT Leadership Summit, Kumar had said that he would replace his Canadian passport with an Indian one following a controversy over his citizenship.

Quizzed about the status of his Indian passport, the 55-year-old actor revealed that he has completed the process of renouncing his Canadian citizenship.

"Having a Canadian passport doesn't mean that I'm less of an Indian. I'm very much Indian.... I applied for it. But then the pandemic happened and everything stopped for 2.5 years. I have got my letter of renouncing and very soon my new passport will come," Kumar said.