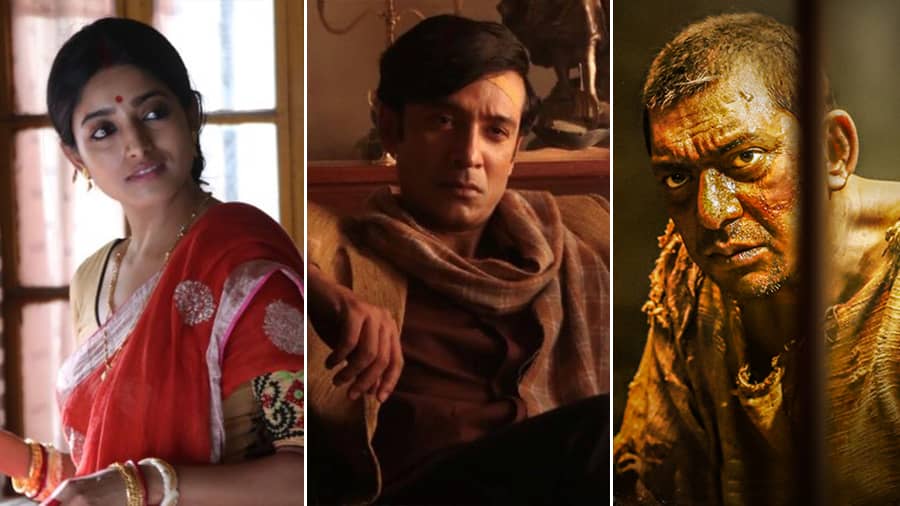 The popular Bengali OTT platform Hoichoi has stepped into its sixth year in style, with a slew of announcements. At a star-studded event on Tuesday evening, the OTT platform unveiled its plan to launch 25 new shows in the upcoming year. These include fresh seasons of existing popular shows as well as new projects.

One of the major highlights of the evening was the presence of Bangladeshi content creators at the gala. Since its launch in Bangladesh in 2019, several Bangladeshi web series on Hoichoi have won appreciation from viewers on both sides of the border. The most-recent addition to that list, Karagar, was a favourite among critics and fans alike. This collaboration will only get bigger in the coming months.

Several popular shows of Hoichoi have been renewed for a fresh season. From Eken Babu to Byomkesh, Gora to Sampurna, Indu to Montu Pilot - Hoichoi’s announcements will surely bring smiles on the faces of viewers who have been waiting for the next chapter in these shows.

We compiled a list of shows returning to Hoichoi for a new season, which we cannot keep calm about.

Bengal’s most favourite sleuth, Feluda, is coming back for a second season on Hoichoi. Darjeeling Jawmjawmat, which released in June this year, became the most watched show on Hoichoi ever. Riding on the success of the first season, director Srijit Mukherji is returning to steer the second instalment. Shooting begins in January 2023. The destination this time for the trio of Feluda (Tota Roy Choudhury), Topshe (Kalpan Mitra) and Jatayu (Anirban Chakraborty) is Kashmir; this will be an adaptation of Satyajit Ray's Bhuswarga Bhayankar.

Created by Sahana Dutta, this eccentric sleuth, too, is coming back for a second season. Played by the versatile Ritwick Chakraborty, Gora is a detective with a weak memory and has the weird habit of singing out of tune. What new mystery he gets embroiled in is a question we are wondering about.

Anirban Bhattacharya will be reprising his role as Byomkesh for an eighth season for Hoichoi. The latest season, titled Byomkesh O Pinjrapol, has generated interest among viewers immediately after the announcement. Apart from playing the ‘truth seeker’, Anirban will also be the creative director for the show this time around.

Bangladeshi director Tanim Noor returns with a new season of his extremely popular web series, Kaiser. Starring Afran Nisho as a homicide detective who is afraid of blood, we are eager to explore the next chapter in his book of mysteries.

Our beloved detective is back. After solving crimes in Bengaluru, Santiniketan, Dhaka and Murshidabad, Eken Babu will now be seen chasing suspects in Kolkata.

Hello, starring Priyanka Sarkar and Raima Sen in the lead, was one of Hoichoi’s most popular shows. In this new season, Ishaa Saha and Payel Sarkar will play the lead roles. New characters, old trouble?

Dealing with the sensitive issue of marital rape and domestic violence, Sampurna created ripples on its release. In the first season, Sampurna, the title character, raised her voice to protect her sister-in-law Nandini. This time, she will fight for justice for all the other Nandinis out there who are afraid to speak out.

One of the best Bengali shows in the recent past, Karagar wooed the audience with its high production value, stunning storytelling and brilliant performance by Chanchal Chowdhury. Fans have been eager for a second season.

Actor Sourav Das became a youth icon of sorts after playing the character of Montu, an aspiring pilot who became a pimp instead. We are all eager to know what happens next in his story.

Created by Ashfaque Nipun, the curtains will come down on this much-loved show this season. What is in store for OC Harun (Mosharraf Karim) and his police station? We are dying to know.

The wait is finally over. The mystery surrounding Indu’s (Ishaa Saha) in-laws will be unveiled in the second season of this popular show. We will finally get to know why Indu’s sister-in-law was banished from her home. The second season will stream in January 2023.