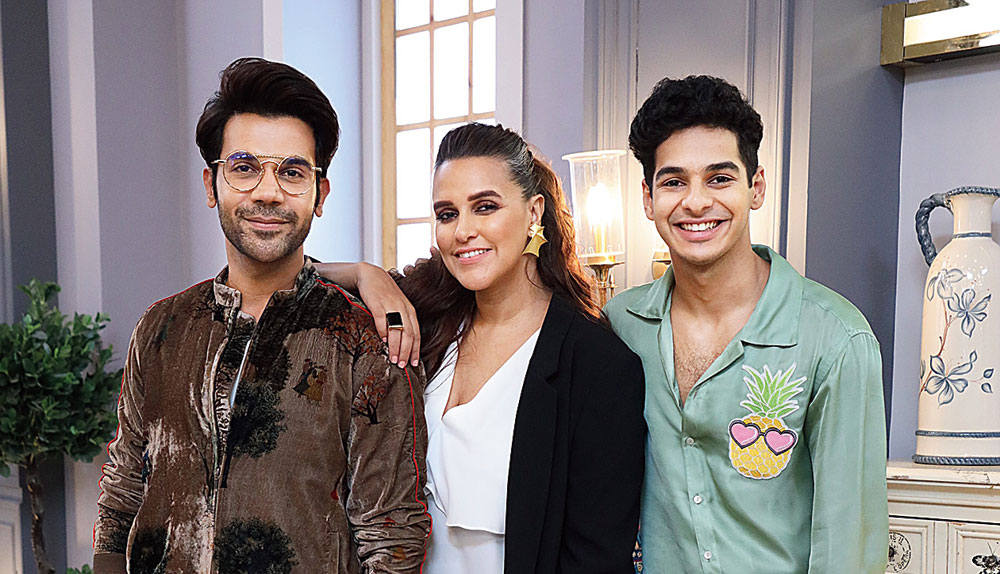 Rajkummar Rao and Ishaan Khatter with host Neha Dhupia on BFFs with Vogue, airing tonight
A still from the show
The Telegraph   |   Published 10.05.19, 01:33 PM

Actors Rajkummar Rao and Ishaan Khatter share the couch in the third episode of Season 3 of Jeep Presents BFFs with Vogue. Here are excerpts from the chat hosted by Neha Dhupia and airing tonight (at 9pm on Colors infinity and Colors infinity HD)...

Neha Dhupia: If you were to get someone’s name tattooed on your body, who would it be and where?

Rajkummar Rao: I don’t know if I can ever have a tattoo on my body, but if it has to be there I am just going to have ‘Ma’, in Hindi. That’s probably where I’ll have it (pointing towards the tip of his index finger).

Neha: Raj, you’re doing Mental Hai Kya. Who is the most mental co-star you have worked with?

Rajkummar: The rat in Trapped was the most mental co-star, yeah.

Neha: Who in your family curses the most and why?

Rajkummar: I used to when I was in school, but not any more. You know, typical Delhi boy!

Neha: The last film that made you laugh till you cried?

Rajkummar: I’ve just binge- watched Friends all over again, so I think I laughed every night. But films that made me laugh…. maybe some parts of La La Land. And The Hangover is one of my favourites.

Neha: What’s your ‘go anywhere do anything’ fantasy?

Rajkummar: I want to go to a beach where there is nobody. Only me, and most probably Patralekhaa (Rajkummar’s girlfriend) will be with me. I just want to roam around there without wearing clothes, with no paparazzi and run around all over the beach naked and swim.

Ishaan Khatter: I am listening to this song called Tadow by FKJ.

Neha: Okay Ishaan, tell us what’s the best thing about being in a relationship with a celebrity?

Neha: Are you in a relationship with a celebrity?

Ishaan: Yeah, my brother (Shahid Kapoor)! He is a huge celebrity and the best thing is to get exclusive entry into film screenings.

Rajkummar: There’s nothing worse, as such. I think it’s just maybe sometimes you want to have your time and space, but there’ll be people all around who want to take selfies.

Neha: Ishaan, who has the worse temper — Shahid or Mira?

Ishaan: I would say my brother.

Neha: Raj, what’s the best accessory you have ever gifted your girlfriend, Patralekhaa?

Neha: Ishaan, one piece of jewellery you would love to give your girlfriend one day? Size, carat, give us all!

Ishaan: I really don’t know much about size and carats and ‘naayaab cheezein’, but I like necklaces.

Neha: Raj, copy one of your co-stars…

Rajkummar: (Imitates Sonam Kapoor’s twang) Okay, so when she speaks English, of course she is brilliant in Hindi as well… ‘Hi Raj, how are you? Hi, you know I was in London, but you have to come to my house, it’s so pretty!