Book excerpt: India: The Wrong Transition, a collection of essays on the Modi years 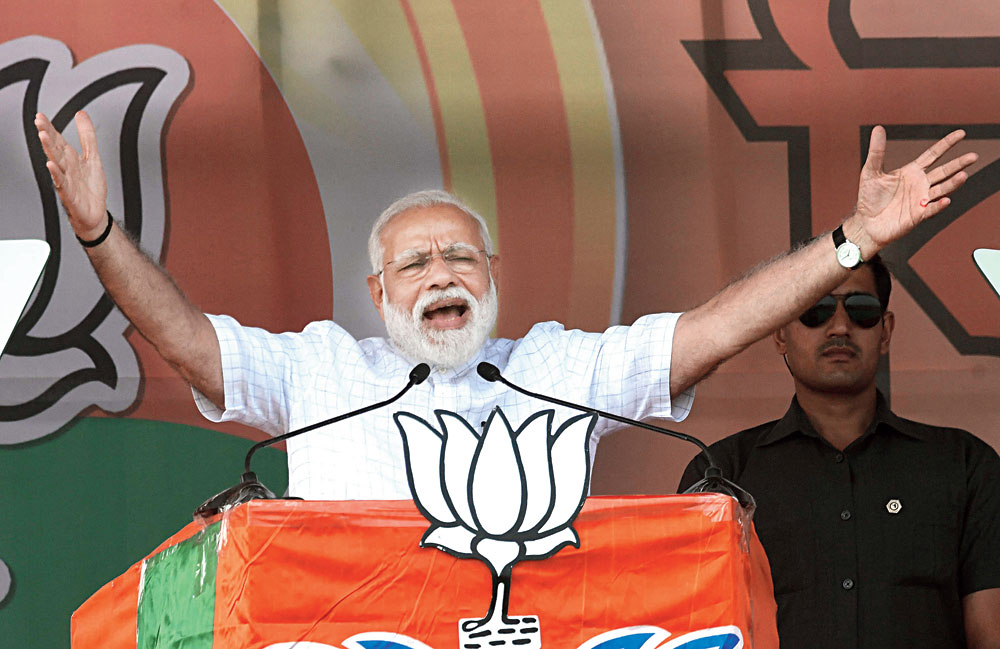 New India” is Prime Minister Narendra Modi’s copyright. It wasn’t in the BJP manifesto in 2014. It is a powerful rubric with which to attract youth power, and harness it.

And yet, when nearly four years of the five are done, the best that Mr Modi’s BJP can do to bring the young Indian on board is to cook up the idiotic notion of “pakora” growth, and pakora politics, when unemployment is rampant among all classes.

This little savoury on the snack menu can’t surely be the lead symbol of the Asian century in which India thinks it has a part to play. Vending pakoras can hardly be said to be the real meaning of India in the new era.

But, surprisingly, Modi believes it does. When questions on rising joblessness were being flung at him, he was far from defensive. His instinctive — and instant and heartless — reply was that making pakoras was also work.

It is hard not to be reminded of the vicious mocking tone of Marie Antoinette — the French queen sent to the guillotine by the revolutionaries, and known for her taste for fancy clothes — when she said if Frenchmen could not eat bread, let them eat cakes.

The Modi government’s achievement on the front of meaningful employment for the young people is less than shallow. The PM in all honesty can’t point to employment or self-employment gains flowing from the much-hyped official programmes such as Skill India, Stand Up India, or the BHIM app spinning out processes that lead to gainful work for the youth in keeping with the aspirations of our times, which Mr Modi’s rhetorical highs helped fuel.

The employment data is woeful. This should cause no surprise, windbag speeches aside. When private investment figures for the economy signal long-time lows, even a “service-sector” avenue like selling hot pakoras cannot have seen a massive expansion. Besides, there is not much value addition involved in such a line of work, and the earnings are pitiable — hardly an advertisement for the shining glory promised in craftily designed government ads and slogans.

BJP president Amit Shah is the perfect acolyte and follows very closely in his master’s footstep. Thus, hardly had Modi uttered pakora than Shah took up the idea with a devotee’s passion. He held forth on pakora employment in his maiden Rajya Sabha speech, attacking political opponents for mocking this as an example of meaningful economic activity.

Let not a national party — the country’s ruling party — degrade itself in this manner because it has failed to live up to its promise of building the economy and seeking to expand it in directions that will yield a new future for young Indians.

It’s a disgrace and leaves a terrible impression of the country — not just of the BJP — among people around the world at a time when the BJP is planning to designate Modi a “Global Legend”, no less.

For doing what exactly? Who knows? May be for getting the saffron party to have a parliamentary majority of its own, for there is no evidence whatsoever of this Indian PM leaving the slightest mark on the world stage — with his neighbourhood policy a shambles, and the relationship with America dependent only on selling India as a huge market and a military base.

But for a party always on the lookout for propaganda punches, the PM is the new Nehru, the new Gandhi, the new Mao, the new Dalai Lama and even the new Marilyn Monroe rolled in one. However, propaganda fades and falsehood has a narrow shelf life; reality lives on.

...The BJP was planning pakora parties and opening pakora stalls in a miserable attempt to mock the Opposition and to subliminally suggest to the poor that the saffron party’s opponents were making fun of them for doing low-value work. This is “technology for development” of the Modi era.

“Chaiwala” politics is long done. If the Prime Minister must offer the country hope, he must move on and invent fresh gags and new lines of enchantment. Modi has gone places on the strength of volatile, hypocritical speeches delivered mostly in the idiom of the poor Indian. These were aimed at self-glorification and the denigration of others in unbecoming language. People have seen through them, especially the poor who had swallowed the untruths and were fooled. It’s time to move on.

Mostly these speeches were constructed on the basis of “facts” — either so-called current data or presumed historical information — that were manufactured to dupe the unsuspecting public in an era when many Indians derive their information almost solely from WhatsApp groups, treating the abounding rumours contained in them as gospel.

Even by his own troubling standards, the PM’s reply in Parliament to the motion of thanks to the President’s address... was startling. It made evident that Modi’s principal agenda is to pull down Nehru and banish him even from the land of memory; it is not to create jobs or promote science and learning or better lives for Indians.

The agenda is to build a “New India” of the RSS’ imagination. Plainly put, the idea is to assert that all the science we know is embedded in the Vedas, and to deny that non-Hindu Indians had any contribution in the making of India’s culture and civilisation.

In this “New India”, Deendayal Upadhyay, a deep votary of RSS’ fundamental tenets, which demonise Gandhi and his work, is the new Gandhi. Nehru’s vision stands in the way of this egregious project. Hence, it must be denigrated even by inventing history, as Modi did in Parliament.

To challenge the reasonable notion that it is hard to think of democracy without Nehru, the PM expounded that India had democracy even in the Lichchavi era!

Then, the usual Patel card: If Vallabhbhai were PM, there would be no Kashmir problem. No one has informed Modi that both Nehru and Patel had together told Maharaja Hari Singh that it won’t be considered an anti-India act even if he chose to join Pakistan, but he should make up his mind before Independence came about.

And no one’s informed Modi that it is Gandhi who made Nehru PM and that he didn’t usurp the throne. Anyway, it is now too late for Narendrabhai to change. May be the people will change him.

Reproduced with permission from India: The Wrong Transition, a collection of essays on the Modi years; Published by Aakar Books