'Doomsday Clock' closer to midnight than ever before, noting threats of nuclear war, disease and climate volatility had been exacerbated by Russia's invasion of Ukraine 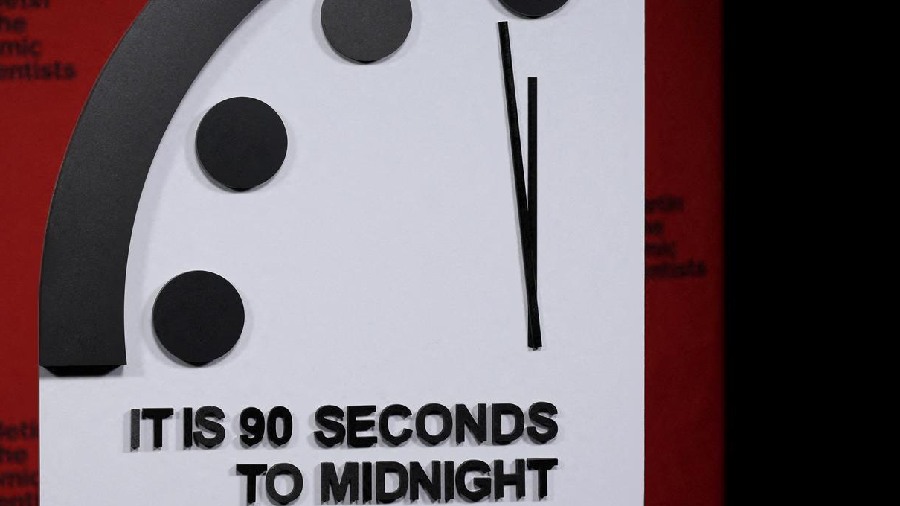 The clock with the Bulletin of the Atomic Scientists is placed ahead of the announcement of the location of the minute hand on its Doomsday Clock , indicating what world developments mean for the perceived likelihood of nuclear catastrophe at the National press club in Washington, U.S, January 24, 2023.
Deutsche Welle
Deutsche Welle   |   Published 25.01.23, 03:48 PM

The Bulletin of the Atomic Scientists on Tuesday set its symbolic "Doomsday Clock" closer to midnight than ever before, noting threats of nuclear war, disease and climate volatility had been exacerbated by Russia's invasion of Ukraine.

The time on the clock was moved to 90 seconds to midnight for 2023. Midnight is supposed to symbolize the end of humanity.

The change in the clock comes after three COVID pandemic-assisted years at a previous record of 100 seconds to midnight.

The group said it was bringing the time closer to midnight "due largely but not exclusively to Russia's invasion of Ukraine and the increased risk of nuclear escalation."

Why is the 'Doomsday Clock' moving closer to midnight?

Rachel Bronson, the Bulletin's president and CEO said at a news conference in Washington on Tuesday, "Russia's thinly-veiled threats to use nuclear weapons remind the world that escalation of the conflict — by accident, intention or miscalculation — is a terrible risk. The possibilities that the conflict could spin out of anyone's control remains high."

The group, whose roots can be traced back to the design and use of the first nuclear weapons, also said that fighting around the Zaporizhzhia nuclear plant and the exclusion zone around the disused Chernobyl meltdown site exacerbated the atomic risks.

Bronson said the group's announcement would also be translated into Russian and Ukrainian for the first time, in a bid to garner relevant attention.

She added that moving the clock closer to midnight than ever was "a decision we do not take lightly," and a reflection of how "we are living in a time of unprecedented danger."

She urged western countries and Ukraine to redouble their efforts for a negotiated solution.

"The US government, its NATO allies and Ukraine have a multitude of channels for dialogue; we urge leaders to explore all of them to their fullest ability to turn back the Clock," Bronson said.

What is the Doomsday Clock?

The Bulletin describes its clock as a "metaphor for how close humanity is to self-annihilation," and moves it forwards or backwards based on its perception of changing global threat levels.

Albert Einstein, J. Robert Oppenheimer and other scientists who worked on the Manhattan Project and the first nuclear weapons founded the Bulletin, a Chicago-based non-profit, in 1945. The idea of the Doomsday Clock followed in 1947.

The clock was also featured heavily in the graphic novel and later film called Watchmen, gaining it increased notoriety.

A group of nuclear and climate scientists and other experts, including 13 Nobel laureates, discuss world events to decide what time to set the clock at each year.

Bronson on Tuesday also cited a potential risk of the use of biological weapons in the war in Ukraine.

"The continuing stream of disinformation about bioweapons laboratories in Ukraine raises concern that Russia itself may be thinking of deploying such weapons," she said.

Sivan Kartha, a Bulletin board member and scientist at the Stockholm Environmental Institute, said that risks to the climate were also becoming ever-more visible, and were fueled by increased coal usage to generate power as countries seek alternatives to Russian natural gas.

"Global carbon dioxide emissions from burning fossil fuels, after having rebounded from the COVID economic decline to an all-time-high in 2021, continue to rise in 2022 and hit another record high," Kartha said. "With emissions still rising, weather extremes continue, and were even more clearly attributable to climate change."

She pointed to 2022 flooding in Pakistan as one such example.

Former UN secretary-general Ban Ki-moon noted the shift on the clock and called on world leaders to take action.

"Leaders did not heed the Doomsday Clock's warnings in 2020," Ban said. "We all continue to pay the price. In 2023 it is vital for all our sakes that they act."

"We have had enough of the Doomsday Clock warnings being followed by inaction," ICAN executive director Beatrice Fihn said in a statement. "The leaders of the nuclear armed states must urgently negotiate nuclear disarmament, and the G7 meeting in Hiroshima in May 2023 is the perfect place to outline such a plan."

Hiroshima was the first Japanese city to be hit by a US atomic bomb on August 6, 1945, a few days before Nagasaki.

These two attacks led to Japan's surrender and an end to fighting on World War II's final front in Asia, but also to the Bulletin's foundation and to the nuclear arms race with the Soviet Union during what would become the Cold War.