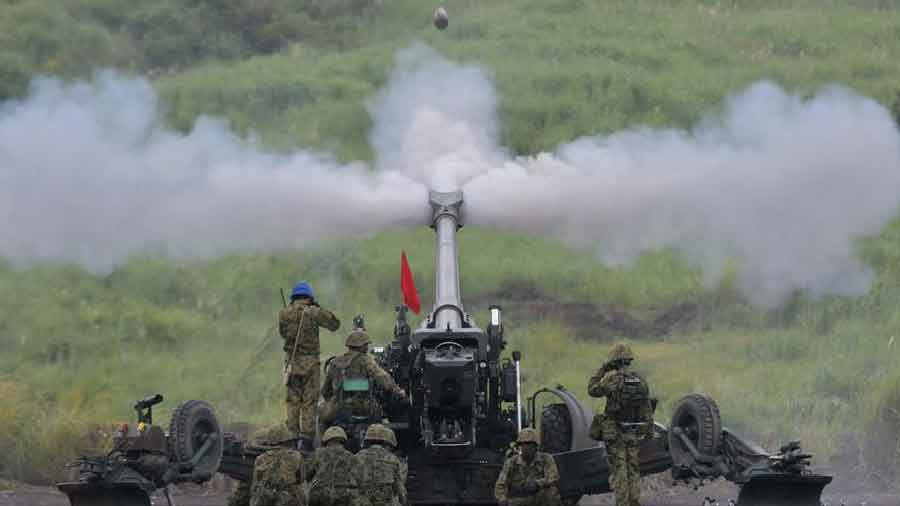 China's military drills in the waters around Taiwan are prompting regional powers such as Japan to rethink defense strategies. Could East Asia be on the brink of an arms race?

China's large-scale military exercises just off the coast of Taiwan are fraying nerves in Asia, as countries worry about growing tensions and possible instability in the region.

During a meeting of the Association of Southeast Asian Nations (ASEAN) in the Cambodian capital, Phnom Penh, ASEAN foreign ministers called for "maximum restraint" and warned that the drills could "lead to miscalculation, serious confrontation, open conflicts and unpredictable consequences among major powers."

The drills commenced immediately after Nancy Pelosi, the speaker in the US House of Representatives, paid a 19-hour visit on Wednesday to Taiwan, enraging Beijing, which considers Taiwan China's territory.

Pelosi's visit was part of a tour of US allies in the Indo-Pacific, and she continued to South Korea and Japan after her stopover in Taiwan.

On Thursday, Japanese officials reported five of the Chinese missiles fired during the drills landed in waters belonging to Japan's Exclusive Economic Zone (EEZ) near Okinawa, where US troops are also based.

"The fact that the Chinese landed five missiles in Japan's EEZ is a clear warning to Japan, as it has become vocally supportive of Taiwan," said Bonnie Glaser, director of the Asia program at the German Marshall Fund.

Beijing's message to Tokyo, Glaser said, is that "if there were a crisis, China has the ability to attack Taiwan and attack Japan. They think Japan should stop interfering in China’s internal affairs."

On Friday, Pelosi met with Japanese Prime Minister Fumio Kishida, after Japan signed an EU-G7 joint statement calling on China to refrain from "aggressive military action" in the Taiwan Strait.

In response, Beijing canceled a planned meeting between Chinese Foreign Minister Wang Yi and his Japanese counterpart, Yoshimasa Hayashi, on the sidelines of the ASEAN conference.

On Friday, Wang and Russian Foreign Minister Sergey Lavrov walked out of an address to ASEAN by the Japanese minister. Diplomats from Japan, China and Russia were invited to the ASEAN conference as guests.

Yoichi Shimada, a professor of international relations at Japan's Fukui Prefectural University, told DW that there were no consequences for the Chinese and Russian actions.

"This indicates to me just how afraid many countries in the region are of China," he said.

"The South Korean president [Yoon Suk-yeol] did not even meet Pelosi in person when she was in Seoul, obviously out of fear for Beijing’s reaction, and it was the same weak response from governments in Southeast Asia," he added.

Tokyo is aware that should a conflict break out over the Taiwan Strait, possibly involving an invasion by China, then Japan will be drawn into the fighting due to its geographical proximity and US military bases in Okinawa and other parts of Japan.

Akitoshi Miyashita, a professor of international relations at Tokyo International University, said China's aggression towards Taiwan was increasing tensions, and in the immediate future, governments are likely to increase military spending.

"Countries throughout the region can see what is going on in Ukraine and they fear something similar could happen over Taiwan," he told DW.

"That means governments are more willing to spend on defense, to be prepared for the security challenges they may face and that effectively means an arms race," he added.

There is already evidence of that build-up happening. On Thursday, Japanese media reported that the Defense Ministry will seek a record 5.5 trillion yen (€40.34 billion, $41 billion) budget for the next fiscal year, with much of the new spending earmarked for space projects and cyberspace security.

There are also plans to develop and deploy new generations of anti-aircraft and anti-shipping missiles in the islands of Okinawa, just a couple of hundred kilometers from Taiwan.

The Japanese military is also investing heavily in the development of next-generation drones, which have proved their value on the battlefield in Ukraine.

Shimada said that Japan's defense spending will continue to rise to meet the changing threats that the nation faces, with total spending likely to climb from 1% of GDP at present to double that amount by the end of the decade.

The fear is that increased spending by Japan will provoke China into a similar leap in investment, which will trigger a cycle bringing in Taiwan, both North and South Korea, the Philippines, Vietnam and other nations that are locked in territorial disputes with Beijing in the South China Sea.

"The Japanese are not going to be intimidated, and the level of concern must be so high in Japan about China overall, but also specifically about China's policies towards Taiwan," said Glaser. "I think we are going to see more willingness by Japan to speak out and criticize China, support Taiwan and more action."